What American Law Professors Forgot And What Trump Knew 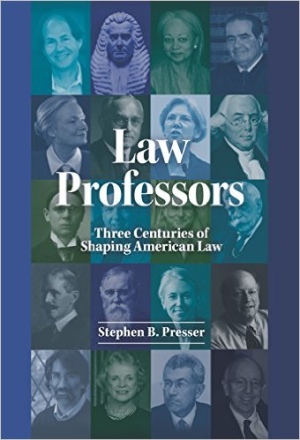 It was lonely being a Donald Trump supporter in the legal academy. Of my thousands of colleagues teaching law in this country, I don't think more than a few dozen believed that he would have made a better president than Hillary Clinton, and not more than a handful of us were willing to go public with our support.

It has always been a risk to be a Republican teaching in a law school, where many teachers see a thin line between support for the GOP and bigotry or insanity. And yet, enough Americans liked what they saw in Trump to give him a smashing Electoral College victory.

How did it come about that law professors grew so out of touch with much of America?

To a hammer everything looks like a nail, and to a law professor everything is a problem in jurisprudence. Accordingly, it's my guess that the legal academy, over the past 80 years or so, began to wander too far from common sense, or, to be more precise, to depart from the essentials of the rule of law. Law professors forgot the most important notion that undergirds our legal system — the basic principle endorsed by the framers, that ours is a government of laws, not men (or women). ...

It seems to be well understood that some conservatives (I'm one) adhered to Trump early on because of the view that he would appoint a conservative like Scalia to the Supreme Court. But I can't help but wonder whether the many millions who voted for President-elect Trump also understood what the legal academy had all but forgotten, that what was at stake in the past election was nothing less than the rule of law and self-government itself.

I don't think it's really all that surprising Law schools value cleverness and a certain emotional detachment The dominant faculties are nearly all located in blue states or blue regions of red ones It really isn't very surprising they'd be liberal, at all.

Unemployed - Dude, you lost. Get over it.

Oh, and if Trump ends up with 306 electoral votes when all results have been finalized, that's not the closest electoral victory since 2000. Kennedy (1960), Carter (1976), and Bush (2004) all won the Presidency with fewer electoral votes.

I agree with your sentiment, the only thing particularly "smashing" about Trump was his winning most all purple states + 3 blue states, and almost 3 more in MN, NH, and NV.

However, your facts are totally inaccurate. At present, the national popular vote is:

His vote total is higher than Romney in 2012 by over 600,000, and he didn't lose the popular vote by 4% points, only about 1% point. Conversely, Clinton's vote total, again at present, is 2.9 million less than Obama in 2012, and 6.5 million less than Obama in 2008. You didn't mention that, so I will for some perspective. Quite the opposite of smashing, when your party's vote total drops in absolute numbers in the last 2 elections, despite the voting age population growing.

Winning the national popular vote is a nice consolation prize, but it's Constitutionally irrelevant, as Al Gore was quoted as saying right before the 2000 election when it looked like he might win electorally but not in total votes.

I voted for neither, but Trump's victory is impressive. He was outspent three-to-one and the major news media threw away what little remains of their credibility trying to put Hillary in the White House.

Given that Hillary's corruption and lying are established beyond all doubt, I've concluded that for all but a few journalists, those vices are regarded as virtues. I've concluded that there's no greater compliment to a public figure than that our news media hate him or her. It hates good and loves evil.

Harder to think of a more clear argument for tenure protections - Non-ultra liberal university faculty bold enough to undertake research and and vocalize ideas that yield outcomes that are contrary to the prevailing narrative. Wow.

I'm quite certain that for those disenchanted faculty, the university will make an ample supply of play-dough and coloring books available along with their affected student bodies.

True enough. And I have just seen a headline that Trump has (barely) surpassed Mitt's 2012 tally - though he still remains far behind Obama's two wins, both in popular and electoral tallies.

One wonders, though, what Presser and other conservative law profs think of the insane tangle of finances and foreign debts and partnerships Trump has, particularly vis a vis the Emoluments Clause and its long-held interpretation that presidents cannot receive gifts or monies from foreign governments or their agents. Trump / Trump Org. currently has a $950 million line of credit from a consortium that includes the Bank of China, a state-owned institution. And then there's the Russian entanglements. And the tentative blind trust that is almost literally the antithesis of an actual blind trust. And sundry other issues that are too lengthy to tackle in this comment box.

Relative to the expected outcome, Trump's victory was smashing.

"Smashing Electoral College victory" = closest result since 2000. And he lost the popular vote by about 4%, garnering fewer votes than Mitt Romney in 2012. Just so we're clear about the foundation of this smashing victory.