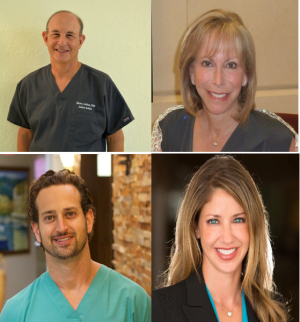 Above the Law, The Dan Markel Case: More Details About His Marriage To Wendi Adelson (And About Wendi’s Mother, Donna Adelson):

Danny and Wendi met through a dating website (if I recall correctly, it was JDate) ... When Wendi saw Danny’s picture, Donna Adelson, her mom, was by her — and in fact they chose together. ...

Wendi has another brother, Robert Adelson, who has flown under the radar — partly because, as noted by our first source, he’s estranged from the rest of the family. ...

Robert Adelson is a well-established, well-regarded doctor, who lives in Albany, New York. ... He was engaged to a fellow doctor, an Indian-American woman who specializes in emergency medicine — but that engagement ended, in part due to Donna’s interference.

He then married “a nice Jewish girl,” but that marriage ended in short order. He eventually married the Indian-American doctor — and broke off (or significantly reduced) contact with the rest of the Adelson family. He and his wife remain happily married, with children — but because of his estrangement from the family, Donna must focus her grandmotherly energies on Wendi’s two kids with Danny.

Sounds like Wendi and Donna Sue were just looking for a sperm donor and wholly unprepared for a devoted husband and father unwilling to abandon his children.

I wonder what she thought of Charlie's relationship with Katherine Magbuana, a Roman Catholic Filipina?

Robert was intending to marry Dr. Challapalli, and eventually did. Chuckie's just been getting some trim. (Not attractive at any age, especially in a man 39 years old). What's interesting is that the three of them were certainly giving succor to, if not stoking, Wendi's formless dissatisfaction with her (Jewish intellectual / professional) husband. That's not something you do when you have your daughter's best interests at heart. The number of women who fancy they can trade up exceeds by an order of magnitude the number of women who actually can trade up (and, of course, that's a terrible way of looking at your marriage). Also, you can never fully and truly divorce someone with whom you've had children (something Wendi learned the hard way).

Sounds as though Donna Adelson was WAAAYYY too involved in her adult kids' lives - with disastrous results for both Wendi and Robert. If she was opposed to Robert's relationship with a non-Jewish South Asian woman, I wonder what she thought of Charlie's relationship with Katherine Magbuana, a Roman Catholic Filipina?

Art Deco - I would think both Donna and Sue could be names of a Jewish woman on their own, but the threat to baptize the kids must have come from *somewhere*. That doesn't just come totally out of the blue, I wouldn't think.

Is Donna Sue Catholic by birth?

"Donna Sue" sounds Southern, but I think she's a graduate of Brooklyn College. She and her husband are from Long Island & the Outer Boroughs, . They decamped to Miami in 1973. Evidently "Donna" can be rendered in Hebrew as "Donna" or "Adina", and "Sue" as "Shoshana". There are a half-dozen rough equivalents for "Wendi". None of them have a terminal 'i', so your daughter can't add smiley-faces or hearts to her name.

This is congruent with certain biographical curios re Robert Adelson, particularly his move from Gainesville to Albany. Both he and Mrs. Adelson practiced medicine in Gainesville, and both had completed their residencies elsewhere.

Mrs. Adelson was actually born in India. She was naturalized in Sept. 1990 consequent to a petition filed by her father. She was a minor at the time, but signed the oath of allegiance herself.

You can verify another detail: the Texas Marriage Collection and Divorce Index has an entry for the marriage of a Robert Adelson and a Deborah Wallenstein in Dallas on 27 March 2004. The marriage was dissolved on 22 July 2004.

This was really interesting. I'm glad Robert was able to get back with the Indian-American after the hiatus in the relationship. It also goes to Donna's pathologies.

One thing I am curious about - there was that threat Donna wanted to use to have Markel's kids baptized Catholic, which Wendi rejected. Robert married a nice Jewish girl the first time. And Wendi & Dan may have met via JDate. Adelsons are Jewish, but 'Donna Sue' doesn't seem like a very Jewish name to me. Is Donna Sue Catholic by birth?

As if we needed proof that family complicit in solicitation of murder is dysfunctional? Soon we will learn mother and daughter appeared in a production of The Vagina Monologues.