Like many other universities this week, the University of Michigan Law School scheduled an event designed to help students recover from the trauma of Republican Donald Trump’s election victory. 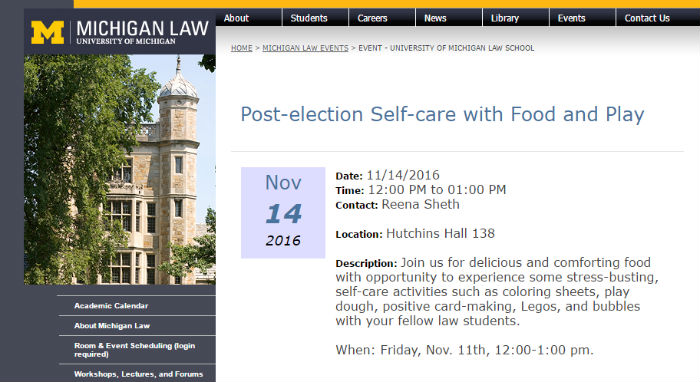 Unlike other schools, UMich Law was apparently so embarrassed when the Nov. 14 event made the news that it deleted the event listing.

Above the Law published an election poll of 2,000 law students and lawyers:

When schools treat an election as a traumatic event — often via their programs on “diversity and inclusion” — they are in fact telling students who voted for the “traumatic” candidate that they aren’t welcome as members of the community. Saying that there’s only one acceptable outcome for an election doesn’t promote diversity, and it makes students who supported the other candidate feel excluded.

Years ago, one of the largest literary estates on the planet, that of J. R. R. Tolkien, took me on in a copyright dispute in federal court over my day-by-day Lord of the Rings chronology.

Whether what I was doing—creating a detailed chronology of a complex fictional work whose text contains little chronology—was fair use had never been settled in court. Not having much money and feeling I could make a good case, I only brought in a lawyer near the very end to handle the messy paperwork of concurrent appeals for summary judgment. That lawyer lacked the sort of aggression I wanted, but at least wasn't frightened by his opponent.

I won it the best of ways. The Tolkien estate bailed out at summary judgment and the judge dismissed their case with prejudice. If you are interested, you can find my legal argument for fair use rewritten as the last chapter of Untangling Tolkien.

My lawyer didn't contribute much, but he did me no harm. I shudder to think what would have happened if I hadn't been legally savvy and was dependent on one of these easily upset law students. I'd hate to visit my lawyer on the day before the trial began, and find him curled up in a fetal position, terrified with the thought of appearing in court, and drawing in a child's coloring book.

I can't help but reflect on something depressing. Who'd want to hire a lawyer so emotionally fragile, he or she collapses over an election result and reverts to a second childhood?

Personally, I suspect that Obama is secretly gloating at Hillary's defeat. The two have never liked one another. Their "victim cards" are stamped differently.

@MM: That was because the schools didn't want followers of fundamentalist Islam to feel excluded or marginalized. Either that or schools were afraid of future attacks by fundamentalist Muslims. It's hard to tell which.

In ditto to Mike, I thought the President, President-elect and Secretary were well measured. Just as H.W. and B. Clinton have become quite close, I believe the weight of the office creates a commonality that few will ever understand.

Just as we honor our Veterans, I respect the sacrifices and maturity that generation has/had. I don't know how we will ever cure the ever increasing emotional juvenile generation.

I recall that when the 9/11 attacks occurred, schools across the nation, excluding NYC of course, observed a moment of silence. No special counseling, no class dismissals, and certainly no walkouts sanctioned by school authorities.

There is an argument to be made for the continued mental infantilization of young adulthood, which now extends to the mid-to-late 20s...

The response to Trump has ranged from very classy (Obama) to not-so-classy (this). I suspect it will stay that way.