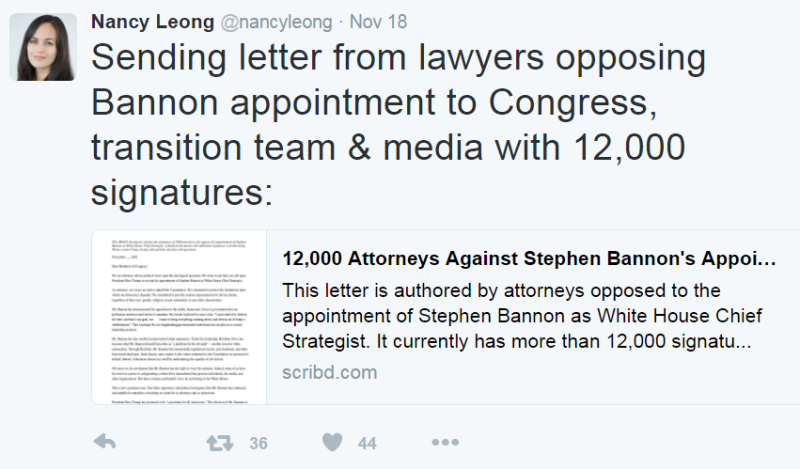 Later today, a letter with over 12,000 signatures of attorneys from all over the country will be delivered to key members of Congress. The letter, originally drafted by University of Denver law professor Nancy Leong, has garnered such a huge number of signatures in just 60 hours of being online.  Leong drafted the letter because “Bannon is on a different level.  His website has enabled white supremacists and his public comments show he does not respect the democratic institutions that we as lawyers have sworn to uphold.”

The letter has signers from all types of legal work and all different political persuasions. As Leong described it, “It’s not a partisan issue to support our democratic institutions and oppose a white supremacist, and I hope that what this communicates to vulnerable communities is lawyers have your back in opposing this.”

We spoke to Leong as she waited out a layover in an airport on Thursday evening about why many lawyers are opposed to him. Below is an excerpt of the conversation.

Big Law Business: Have you ever done activism like this?

Leong: Literally never. And I think it’s not very difficult to tell that I am a liberal and a democrat, and I’ve been alive for a Reagan Presidency and both Bush Presidencies and I have literally never have been as alarmed by an appointment as I am by this one. I think that the racial rhetoric is becoming more and more explicit. I think there have been a lot of racial code words throughout the campaign but the appointment of Stephen Bannon, who is literally a white supremacy hero is the most overtly racial thing Trump has done since the election. I’m not an organizer by nature. I was surprised when the petition got rolling like this. I’m an academic.

Another example of people with too much time on their hands. Why not put your time & effort toward something you can actually impact?

Who are these people to tell Trump who he should want as his personal advisors? This isn't even a position that requires confirmation, where their opinion might have a slight chance of being relevant.
Criticize the choice all you want. But oppose it? You don't get a vote in that decision.

If the 12,000 lawyers in question do not wish to hire Stephen Bannon, there is no one stopping them from not hiring him.

At a time when Trump's party controls Congress, this is ineffective lobbying for financial support of higher education by the government.

As the IRS leadership learned, when you appear to take sides in partisan fights, you lose something priceless: your credibility as an impartial referee.

Guess if this guy wanted a decision on who should be the white house advisors he should have voted.

Why should lawyers have an opinion on who the white house strategist should be? Oh, because they are often make lots of money when are upset, angry, and at loggerheads with each other.

Are these people mad? I know nothing about Bannon, but I can't recall any similar signature campaign by these lawyers during the election campaign against Hillary's lying, corruption, and eagerness to sell our foreign policy out to the highest bidder. And that's not getting into her nastiness attacks on her sexual-predator husband.

And need I mention the bigotry inherent in Obama's "bitter clingers" and Hillary's "basket of deplorables" comments? Their target was middle-American not the KKK.

Sorry, but selective outrage like this isn't credible. The old-fashioned term for it is hypocrisy on a massive scale.

I can think of very few things that would increase my belief that Stephen Bannon is the right choice more than a letter that twelve-thousand lawyers signed.

The problem is, by opposing virtually everything that Trump does, the liberal left may be effective in opposing nothing