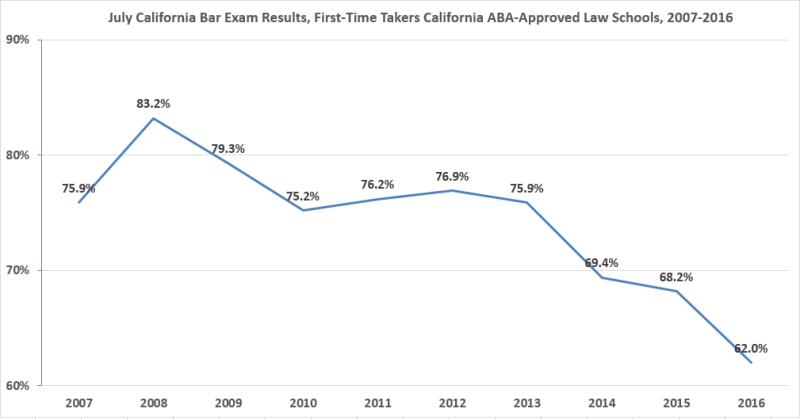 As the July 2016 bar results are released, it appears that nationally, there’s a slight uptick with scores, says Erica Moeser, president of the National Conference of Bar Examiners. “The big picture item is that we have looked for scores to continue to drop, and they didn’t,” she told the ABA Journal.

Scores did drop in California from 46.6 percent in July 2015 to 43 percent in July 2016. That’s attributable to a passing percentage reduction among first-time test takers who graduated from California law schools with ABA accreditation, Moeser says. “That is the largest group of test-takers, and their performance dropped from 68 percent on the July 2015 bar exam to 62 percent this July,” she said.

New York, which like California has been known for having a hard bar exam, saw a 4 percent pass rate increase for July 2016. That’s likely due to New York adopting the Uniform Bar Exam this year, say many law school professors. ...

Some thought that this year’s slight increase in the Multistate Bar Exam’s national mean score—from 139.9 to 140.3—might bring better bar passage rates for July 2016 test takers. For the most part, that didn’t happen, Derek Muller, a Pepperdine University law professor who writes at Excess of Democracy, noted in a Sept. 20 post.

Gayle Murphy, senior executive for admissions at the state bar, through a bar spokeswoman attributed the dropping rate to fluctuations rooted in "the skills, abilities and preparations of the applicants who take a particular administration."

Others, however, say the lower pass rates in recent years are likely due to top-notch college graduates—many already saddled with enormous student debt—choosing other career paths in a relatively improved job market. "That's the problem: law schools are graduating students that are passing the bar at lower rates," said Derek Muller, an associate professor at Pepperdine University School of Law. That may not change any time soon, Muller said, given that growth in the number of students taking the Law School Admission Test is holding steady.

Perhaps the decline is simply a reflection on poor law school admissions standards including far too much reliance on LSAT scores; a totally unproven standard of ability. It would also be helpful if more professors had actual experience practicing law.

All of which begs the question of whether the harder bar exam/lower pass results are keeping the "correct" marginal prospective attorneys out and letting the "correct" marginal prospective attorneys in. Based on my experiences with both the California and New York bars, this is... not self-evident. (I'm being polite, because this is someone else's forum.)

It's also law professor time accounting and money management: the assumption that everyone has nearly two years and several thousand dollars lying around to take the bar exam three times.

"This implies that after 3 tries, close to 90 percent will have passed."

This stat would imply that if people passing or failing the bar was completely random, like the outcome of a coin flip, so that everybody had the same chance to pass every time they took it.

Well, like Hillary, failing a bar just means you can almost be president.

Obviously, the exam is too hard. It's not fair and is unfairly discriminatory.

Who could have seen this coming?

This implies that after 3 tries, close to 90 percent will have passed.

If the new ABA 75% rule passes this February, it will absolutely wreak havoc on California Law Schools. At least half the ABA schools - and perhaps up to 66% - will be out of compliance. The question is, do any of these actors actually recognize the writing on the wall, or are they just bulldozing ahead with business as usual?