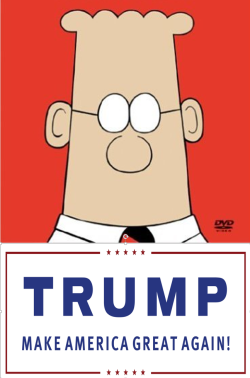 Following up on my previous post:  Dilbert.com, I Don’t Want a Government Job:

My current tax rate is about half of my income when you add up all of the various taxes. I don’t have many deductions. Clinton proposes an estate tax that would take about half of what is left. In effect, Clinton wants my tax rate to be around 75% for every dollar I earn today.

That level of taxation would make me feel like a government employee. The vast majority of my time and energy would go toward making money that politicians would decide how to spend. That doesn’t feel like a rewarding life. If Clinton wins, I would think hard about retiring early and becoming a user of resources instead of a creator of resources. Because I don’t want a government job.

A Trump presidency, on the the other hand, makes me want to do something useful for the country that is good for me too. That’s a big part of why I have been blogging about Trump’s persuasion skills. I want voters to have a clear view of their options. If voters choose Clinton, I can live with that for six months until Kaine takes over. But I wouldn’t feel good about myself if I didn’t at least try to help people see the Trump option for what it is – an opportunity to “drain the swamp” as he says. ...

Sure, both candidates are flawed, but both have the capability to deliver on their main propositions. Clinton probably can give you a third term of Obama(ish) and Trump probably can drain at least some of the swamp. If you step back from the negativity of the election for a moment, you can be grateful that our Republic served up these two options. That’s how it is supposed to work.

On election day, should Trump win as I predict, I ask for Trump supporters to stay cool when the predictable riots erupt. And keep in mind that if you vote for Trump, you own it. If you aren’t helping him get it right after he wins, you haven’t done enough. Trump is a group-participation president by design. He is directly asking for voters’ help in “draining the swamp.” In the short run, the best way to help Trump is by avoiding trouble on election day and by reassuring Clinton voters that you have always been on their side as Americans. Then act that way.

Oh how I miss the days of the Vanderbilts. Cue music from Titanic.