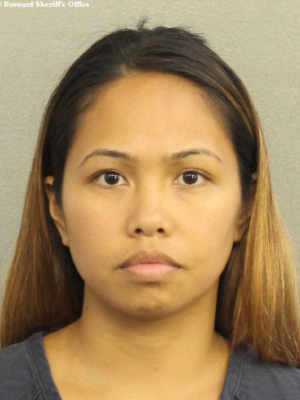 Katherine Magbanua, the woman investigators believe is the go-between for the family of Markel's ex-wife Wendi Adelson and the men suspected of killing him, was arrested Saturday in Broward County. She faces a murder charge in the 41-year-old's death. ... It's an arrest, court documents suggest, that could put investigators closer to the Adelsons, the wealthy owners of a Tamarac dentist office who were determined to move Markel and Wendi's two young boys from Tallahassee to South Florida. ...

Court documents said Magbanua shares two children with Garcia, a career criminal, but was in a "personal relationship" with Charlie Adelson, a periodontist, around the time of the murder. Cell phone records show she was in constant contact with Garcia, Rivera and Charlie Adelson in the weeks and hours before the crime.

The court documents supporting her arrest, which were released by TPD on Sunday, are clear: The 31-year-old is the only apparent link between Markel and Garcia and Rivera. The trio, court documents said, "were compensated for their actions."

The 18-page probable cause affidavit, which was signed Friday, comes three weeks after State Attorney Willie Meggs said he would not approve arrests for Magbanua and Charlie Adelson. Meggs told the Tallahassee Democrat in early September there wasn't enough evidence for their arrests to hold up in court.

David Oscar Markus, the attorney for Charlie Adelson, said Magbanua's arrest "smacks of utter desperation." "It's sad that the police have arrested Katie when just last week the prosecution said there was no basis to proceed," he said. "They are trying to pressure a single mom who has no priors by threatening to make her little kids orphans. That's not how our criminal justice system is supposed to work."

The investigators who analyzed the cell phone records in the case were able to detect a call pattern, which they said showed Magbanua as the bridge between the Adelsons and the suspected killers.

Calls among the group typically worked this way, court records said: Magbanua would call Charlie Adelson, who would call his mother Donna, while Magbanua talked to Garcia.

Two and a half weeks before the crime, investigators said there was a "flurry" of contact between "the alleged conspirators." On Sept. 1, Magbanua and Charlie Adelson's cell phones were pinpointed in the area near his home. That same day, Magbanua reached out to Garcia 48 times before getting a hold of him. They talked six minutes, and shortly after, Garcia called Harvey Adelson's cell phone, which went to voicemail.

Magbanua talked to Garcia and Charlie Adelson several times that night. At one point, Magbanua also called Harvey Adelson, a call which also went voicemail, and then called Rivera a minute later. The calls ended shortly before 1 a.m. with an 11-minute conversation between Charlie Adelson and his father.

"Investigators believe this pattern is consistent with Magbanua being the conduit during the planning of Markel's murder," investigators wrote. ...

The night before Markel was murdered, while Garcia and Rivera were at the Rodeway Inn hotel on North Monroe Street, Magbanua called Garcia, then Charlie. Charlie made contact with his mother shortly after 1 a.m. and then called Magbanua back a minute later.

While Markel worked out at Premier Gym, Charlie Adelson talked to his mom once and Magbanua four times. Minutes after Markel was shot, Donna Adelson would talk to her son twice. Minutes later, Charlie talked to Magbanua.

Just days after Markel was killed, Magbanua started receiving paychecks from the Adelson Institute for Aesthetics and Implant Dentistry, the family's dentist practice.

The checks were each for $407.58 and were handwritten and signed by Donna Adelson. Court documents said the checks looked as if they were all written at the same time, each for a 10-day pay period. According to the court documents, the checks came even though surveillance revealed that Magbanua had only been to the institute once. Over the next 16 months, Magbanua's bank accounts ballooned by more than $56,000, mostly because of cash deposits.

Meanwhile, investigators said Charlie Adelson did all he could to keep Magbanua happy.

She drove a 2001 Lexus formerly belonging to Harvey Adelson and then bought it at a bargain price. In April of this year, Charlie Adelson bought Garcia a GoPro camera for his birthday, but Magbanua said he should have given him his Ferrari. Charlie Adelson also offered to sell Magbanua his 18-foot bay boat. He later offered her his Range Rover, titled in Harvey Adelson's name.

Garcia and Rivera also came into some money after Markel's murder. In the four weeks after the killing, Garcia bought a 1984 Chevrolet Monte Carlo, a 2000 Nissan Maxima and a 1997 Honda yellow motorcycle. The week after the murder, Rivera bought a 2003 Suzuki motorcycle. A December 2014 Facebook photo shows the two posing with their new motorcycles.

"In addition, examination of Magbanua's Facebook profile before and after the homicide show images of Magbanua with obvious breast enhancements following the murder," the probable cause statement says.

Who informed the suspects of the hidden secluded path the suspects trotted straight towards the day before the murder? Most of the population don't even know (didn't know) of its existence??

Know way to know it even exists much less that the back of Dan's house can be seen from it ....this was not an accident or a coincidence.

Do the words circumstantial evidence and "beyond a reasonable doubt" not have any meaning in Florida?

Hmm. Some unidentified party just happened to put a bullet in Prof. Markel the very same day these two were stalking him. Or some disgruntled student or disgruntled law school graduate elected to take out Prof. Markel by hiring a hit man who just happens to be one-degree of separation from a certain South Florida periodontist whose hobbies (per a social work professor at FSU who's acquainted with him) include 'hating Danny Markel'. Or someone has successfully doxxed the Adelson's and, having discovered they've got a pair of gangbangers one-degree-of-separation removed, has elected to hire these gangbangers to committ a violent crime everyone will associate with this family of dentists. Funny how they persuaded the Adelsons and the gangster's baby mamma to undertake a flurry of phone calls within an hour of Prof. Markel's murder. It's like totes reasonably doubtful.

Do the words circumstantial evidence and "beyond a reasonable doubt" not have any meaning in Florida? Yes, it is suspicious, but you cannot handpick a jury who is going to convict on no more than they have.

This is going full OJ. Next will the Adelson's offer a reward for information leading to the conviction of the real killer?

And the local DA has still NOT signed-off on probable cause for arrest? Sheesh ...

Every single piece of evidence that implicates Magbanua also implicates Charlie Adelson. They better not proceed to trial without arresting at least Charlie, and probably Donna and Harvey, otherwise it will look extremely bad for the prosecution.