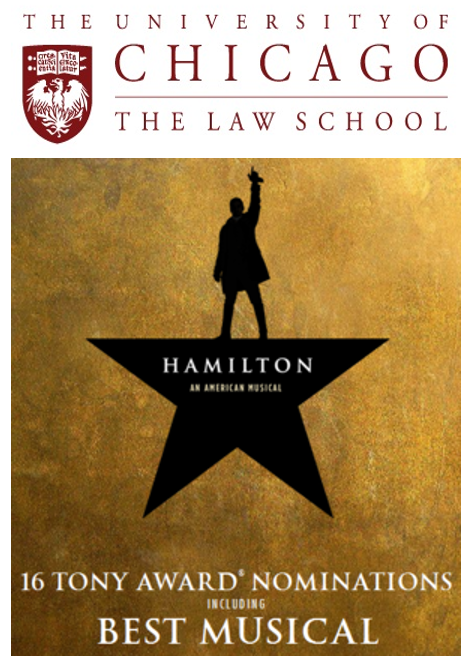 University of Chicago Law School, William Baude's "Hamilton" Welcome to the Class of 2019:

The musical’s opening number begins with Alexander Hamilton himself arriving in a new city to start a new challenging endeavor. ... [I]  want to talk to you briefly about Hamilton, and to offer you three ways that you might consider Hamilton’s advice for your own time in law school.

Lesson Number One: Take ideas seriously. Relentlessly question the conventional wisdom.  Say what you will about Alexander Hamilton, but he had audacity. ... My first suggestion is that you take a little bit of Hamilton’s … attitude with you into your classes. ...

Law is partly about learning the rules, but it is also about arguing: arguing against the rules, arguing for new rules, devising new schemes within the rules or transcending them. When you read a new case, don’t forget to read the dissent. (Frankly, I often start with the dissents, which may explain a lot about my views of the world.) If there isn’t a dissent, write it! Or at least think about what it would say.

You will understand what work the rules are doing if you understand why people might disagree with them. You will understand your own arguments better if you understand what is wrong with them. Law school is the time to start asking those questions, and it is one of the things that this law school, in particular, excels at. Don’t be afraid to talk in class. Don’t be afraid if you find yourself trying out some crazy argument that questions the premise of some area of law, or even some premise of your own way of thinking. You can come back to your premises afterwards, if you still want to.

So follow Hamilton’s faith in the power of ideas, his willingness to question conventional wisdom.

Number Two: Your professional lives start now. But what I really mean is that you are already making friends who will matter for the rest of your life as a lawyer.  For Alexander Hamilton, those early friends included Hercules Mulligan, the Marquis de Lafayette, and John Laurens, each of whom share with him the third song of Hamilton, My Shot! ...

Hopefully we won’t be fighting another American Revolution any time soon, but I think you see my basic point. Your classmates today will be your co-workers, clients, and confidantes tomorrow. Much of what you learn will be from each other, and much of the emotional and personal support you need will come from each other as well. Of course you all come to law school with relationships outside the law school that are equally or even more important, but you aren’t done.

So start now to be the kind of lawyer you want to be, and to have the kind of professional relationships you want to have. Be patient when your classmates flub their first cold calls. (It will happen to you too, and you want them to return the favor.) Be civil when your classmates say things you think are wrong or wrongheaded. Be good to each other. Don’t be so caught up in keeping your heads down or focusing on the path ahead that you forget to see who is beside you.

Number Three: Try, at least sometimes, to focus on the law on its own terms. Now this one may be a bit abstract, but bear with me, because it’s actually the most important thing I have to say to you tonight.

Lin-Manuel Miranda didn’t just write a musical. He wrote a great musical. A musical that made a ton of money, for himself and for others; that gave huge opportunities to performers of color; that changed the conversation around race and theater; that showed how Americans today can recover founding-era history for their own purposes; that kept Alexander Hamilton on the ten-dollar bill; that won eleven Tony awards, a Grammy award, a Pulitzer Prize, and, for good measure, a MacArthur “Genius Grant.”

But here’s the funny thing.

Now think about law school. All of you are here for a reason. You have ambitions—whether to make money, change the world, serve the just, or “prove that you’re worth more than anyone bargained for.” But to do that, as lawyers, let me suggest it will help if you immerse yourself into the law qua law. Don’t be too focused on only learning the legal rules that will help you make money or serve the just. Don’t be too focused on making sure every legal argument is on message.

The law has its own rules, its own language, its own way of thinking, and to master that you need to focus on law. When you graduate, you’ll see that some other lawyers have this sixth sense for legal argument. It’s not just about being able to remember the statutory phrases from the internal revenue code or some obscure embargo case about quasi-War with France, or the four-part test for federal question jurisdiction. They can get what it really means and how it fits into the rest of the law and when it’s a red herring, in a way that outsiders can rarely understand. This is your chance to start developing that sixth sense, and you can if you practice it.

But law is easiest to understand—maybe this is the only way to understand it, but I’m not sure— if you think of it as its own thing, not as an elaborate way to do something else.

Now I’m not saying you should each forget why you are here—if you know. Not for a minute. But I am saying this: You will be better lawyers, and therefore better at making money, changing the world, serving the just, if you’ve figured out how to get inside the head of a lawyer.

Try taking the law seriously on its own terms. Get into it.