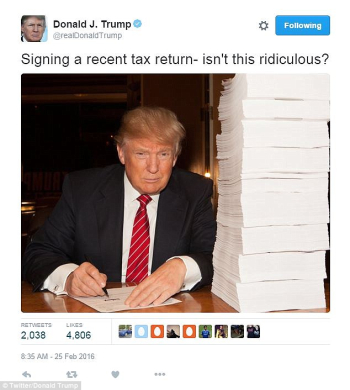 Trump claimed almost a billion of tax losses on his 1995 tax return. Trump did not lose anything like that in economic substance because he never put that much money into his transactions. If he never put it, he did not lose it. Trump must have treated part of the $3.4 bank debt as a cost and tax basis, while inconsistently, not correcting his cost when it turned out not be paid. Sheppard and Lipton have proposed an S corporation or Gitlitz theory, which if applicable would allow the fake loss as a tax deduction, but real estate developers did not use S corporations in the early and middle 1990’s because S corporations trapped all losses inside the corporation where they were wasted. Trump might have reduced basis in real property, rather than taking an immediate income or NOL reduction. In any event, the losses do not “impinge on the world” and courts take away fake tax losses when they see them.

“Legal” means that a court would uphold the tax loss when fully aware of the facts and with capable briefing by adversaries. The standards for reporting losses allow the taxpayer to report that this loss might be available, but it probably is not. “Legal” does not include claims that were not caught by a smart agent, which were in fact fraudulent.

The legality of Trump’s claimed losses has some bearing on the current election. Even beyond the election, we need to understand his claim to ensure that such an awful result never happens again.

"Posters above ignore how Trump converted the immediate tax liability for CoD income into a loss of future tax benefits on the casino buildings via the exception provisions in Section 108."

Circle of life, Simba. That's how the Tax Code rolls.

In 1990 Donald Trump owed more than $3.2 billion of which more than $900 million was backed only by his signature, including an UNrecorded mortgage on Mar-A-Lago (which appears to have violated New York banking law since it was made by Chase in Manhattan). Most of the debt was bonds on his three casinos, in which from the get-go he had a negative investment.

The net worth statement admitted in his financial stability hearing as a casino owner showed a net worth of MINUS $295 million. It was generous, listing values far above what some of his assets actually brought. I covered this at the time and unlike the reporters who wrote whatever Trump flacks and lawyers told them, I analyzed the documents.

Trump testified nine years ago that he determines his net worth based on his feelings and emotions, as I report in The Making of Donald Trump. There is no verifiable evidence that Trump is or ever has been worth a billion dollars and his own statements have varied his net worth by as much as 67% in a single day ($3 billion in the morning, $5 billion in the afternoon) and by large amounts in summer 2015 ($8.7, $10, more than $10 and $11 billion, none with verifiable and comprehensive listings of assets and liabilities, only a statement with disclaimers as to its reliability).

Posters above ignore how Trump converted the immediate tax liability for CoD income into a loss of future tax benefits on the casino buildings via the exception provisions in Section 108, as I explained a few weeks ago in my Investopedia and Daily Beast column. Regulatory documents support this.

Cal Johnson, a formidable authority on tax gaming, has laid out an interesting and well thought through argument, yet instead of serious comment on his proposal what I read above is superficial.

How about critiquing Cal’s argument, which would be a useful exercise as it may tell us a great deal about how to improve the tax code we have.

The media discussion of Trump's illegally published 1995 returns shows that publication of tax returns can actually worsen the quality of public information in the end, due to media distortion. He is is being slammed for using net operating losses as if he were some sort of shameless extrovert or his sister was a thespian. What would happen if his 2015 tax returns showed he was “taking capital gains”? The networks would insinuate that he was a thief and speculate as to who he was taking them from.

While these discussions are immensely interesting, they are ALL based on excessive amounts of speculation. Which points out once again that Trump should release his tax returns.

Eric, your consistent obsession with the facts is getting tedious. Speculation grounded in the least charitable assumptions is far more in keeping with contemporary standards, especially if you want to be taken seriously by academics or journalists.

Whoa der podner. Who peed in your coffee? Surely, you know how the circle of life works in the Tax Code? Say, the Trumpster used $1 Billion in debt to gin up $1 Billion in losses. At some point, if he doesn't pay off the debt with cash, he is going to have $1 Billion in income when the debt rolls over. I suspect he had one heck of a Sec. 357 gain when he rolled up everything in his IPO.

"Trump did not lose anything like that in economic substance because he never put that much money into his transactions."

How do we know that? It seems to be unclear how much he was worth in 1990. $500 million is one guess--- see https://www.quora.com/Did-Donald-Trump-inherit-a-lot-of-money-and-then-increase-his-net-worth-at-an-unremarkable-rate . I may be way off base, but isn't it reasonable to think that he put $400 million into real estate, gave a personal guarantee for $500 million more, and borrowed $2.4 billion? Even then it seems crazy that the banks would loan him so much. Would they have been crazy enough to let him put in just, say, $200 million while they invested $2.4 billion for nothing but the interest rate return? Maybe--- that is what banks did in the 2008 crisis. Does anybody know?

Did Trump do anything different than other developers? If not, what is the fuss about?