Filing Taxes Should Be As Easy As Ordering Pizza, Obama Says 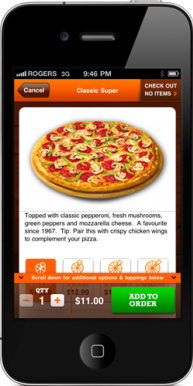 Wired, Filing Taxes Should Be as Easy as Ordering Pizza, Obama Says:

The Situation Room is not as gee-whiz as you think it is. Take it from someone who knows: President Obama.

“I always imagined the Situation Room would be this super cool thing, it’d be like Tom Cruise in The Minority Report,” Obama, the guest editor of WIRED’s November issue, said during a lengthy interview with Joi Ito of MIT’s Media Lab and Editor-in-Chief Scott Dadich. “It’s not like that at all.”

In a wide-ranging conversation, the president described the tech gap between the public and private sectors. (Guess which side has better gear?) ...

“There’s a whole bunch of work we need to do around getting government to be more customer-friendly,” Obama said, adding that filing taxes should be “at least as easy as ordering a pizza or an airline ticket.”

This is about more than convenience. The next president will need technologists to help solve some of the most serious problems facing the country, too, including climate change and rising seas. “There’s still just an enormous amount of work to be done to deploy analytical tools and computing to crack the code around clean energy,” Obama said. “We’ve made progress, but we have a long way to go.”

The real problem is neither party does anything on tax reform or basically starting over and having simpler taxes. Either party could have proposed a committee of retired congressmen and tax executives to review the code and come up with changes. Its been done several times before but neither party has the guts to cut strings with lobbyists and money to make a simpler code. So why point fingers. It will never happen no matter who is control. Where are the realists?

Obama is a "day late and a dollar short". He squandered the time that he could have spent actually managing the improvement of "people friendly" government dictating who can use which bathroom. Oh well!

I really don't see any policy proposals here from the President.

What I do know he's actually proposed and in some cases enacted is merely raising marginal tax rates, layering on more complicated tax credits, and adding even more onerous compliance requirements with the ACA. There have literally been no proposals to simplify, streamline, or reform (meaning make more efficient, not just raise taxes) from the White House that can be pointed to, unless I missed something.