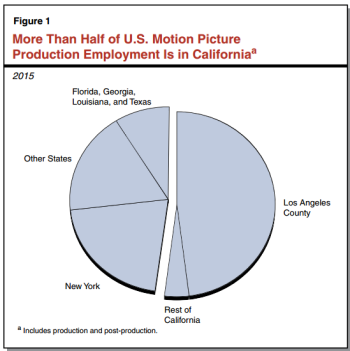 California provides tax incentives for qualified film and television productions to be made in the state. The first film tax credit program was adopted in 2009 and provided $800 million ($100 million per year over eight years) in credits to selected feature films and television projects. In 2014, the Legislature created a new film tax credit program that increased the available amount of tax credits to $330 million per year—beginning in the 2015–16 fiscalyear—and modified the program in various ways.

In this report, as required by law, we evaluate the economic effects and the administration of the first film tax credit program passed in 2009. We find that about one–third of the film and television projects receiving incentives under this program would probably have been made in California anyway. We suspect that this level of “windfall benefits” to some credit recipients may be low compared to other tax credits, which would suggest that the first film tax credit program targeted the types of production vulnerable to being filmed outside the state relatively well.

The $800 million in credits under the first film tax credit program will eventually go to more than 350 projects. These projects generated or will generate billions of dollars of economic activity over the life of the program. The net amount of new economic activity is uncertain, however, with benefits offset somewhat by economic opportunity costs and other changes in the state’s economy. The direct fiscal cost of this program to the state of more than $800 million, including administrative costs, is likely offset by several hundred million dollars of additional state tax revenues related to the increased economic activity. Local tax revenues—mostly those of Los Angeles County—could also increase somewhat.

As we have stated previously, the competition between states to provide public subsidies to specific individuals or companies is very problematic as a public policy. In general, we advise policy makers to reject such tax incentives. We have, however, acknowledged that California’s adoption of a film tax credit is understandable in light of the actions taken by other states to lure Hollywood productions away from California. If more jurisdictions back away from their film and television tax incentives, lawmakers should consider whether California’s incentive programs should be changed or eliminated as well.

Tax Policy Blog, California LAO Finds $1 of Every $3 in Film Incentives Go to Projects That Would Have Happened Anyway