2016 International Tax Competitiveness Ranking: U.S. Is 5th From The Bottom

[T]he Tax Foundation released the third annual International Tax Competitiveness Index. Once again, the United States ranks among the bottom 5 countries with the 5th least competitive tax system in the OECD. Only Greece, Portugal, Italy, and France have less competitive tax codes. On the other end of the spectrum, Estonia takes the number one spot once again, with New Zealand and Latvia having the second and third most competitive tax systems, respectively. 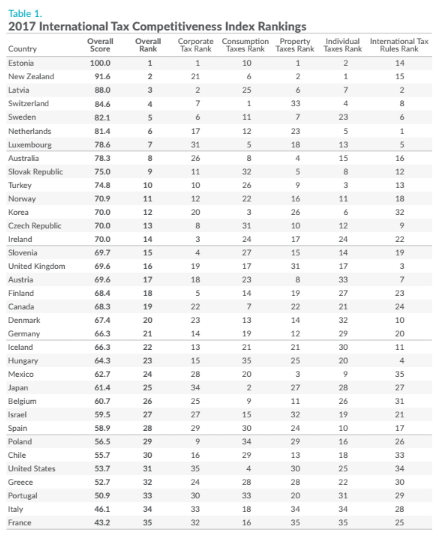 While the United States’ ranking rose this year from 32nd to 31st, this is not due to any positive reforms. Rather, the U.S. has stayed still while Greece fell. The U.S. continues to rank toward the bottom of the pack due to three main factors: it is one of only six remaining countries in the OECD that does not have a territorial tax system; it maintains the highest corporate income tax rate in the industrialized world at 39 percent; and it has a relatively high and poorly structured individual income tax system that taxes both dividends and capital gains.

For the third year in a row, France earns the distinction of having the least competitive tax system in the OECD. In addition to having one of the highest corporate tax rates in the developed world at 34.4 percent, France maintains high and poorly structured property taxes along with high, progressive individual income taxes.