Following up on my recent bar exam posts (links below): 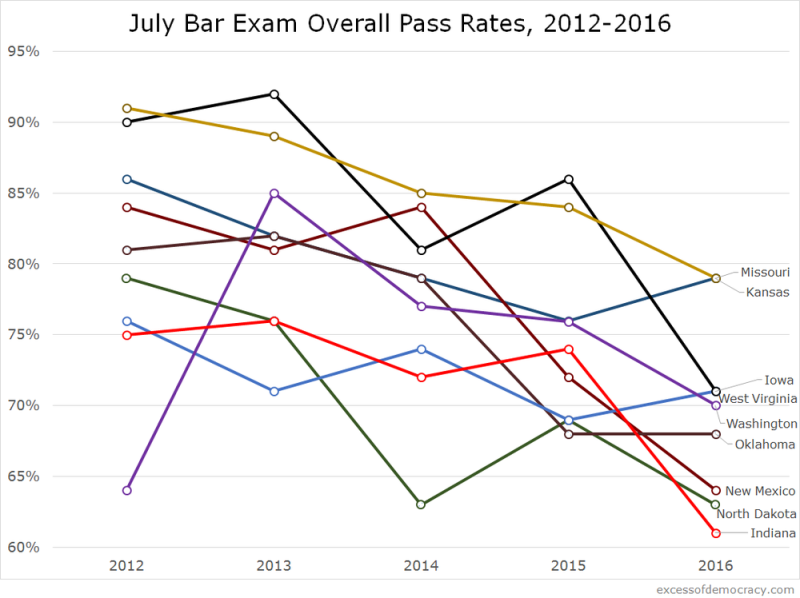 A forecast for better bar pass rates is turning gloomy as scores from the July exam begin to trickle in.

A slight increase in the average score earned by this summer’s test takers on the multiple-choice portion of the test had fueled optimism that the two-year slide in bar pass rates was at an end. But a number of early-reporting jurisdictions—most notably Florida—show continued pass-rate declines. ...

“Florida’s drop is a little surprising,” said Derek Muller,  a professor at Pepperdine University School of Law who writes about bar pass rates on his blog, Excess of Democracy. “When the MBE rises or falls, we should expect the overall pass rates to also rise or fall.”

The weak results thus far don’t bode well for the jurisdictions that haven’t yet released scores, Muller said. “The early jurisdictions have tended to be canaries in the coal mine for later jurisdictions,” he said.

It’s possible that strong students—seeing the dire reports of dropping bar pass scores—studied more this year and drove up the average MBE score in the process, Muller theorized. That could explain the contradiction between the higher nationwide MBE score and flat to lower pass rates. Better performances by test takers who were in no danger of failing would not boost overall pass rates, Muller said. “The other explanation is that we’re just seeing unlucky jurisdictions and the scores will go way up in California and New York,” he said.

Bar exam pass rates have fallen in at least seven out of 13 states that have so far reported July results. ...

Law.com spoke with Pepperdine law professor Derek Muller about the disconnect between the higher MBE scores and the continued decline in bar pass rates in the states reporting the results so far. Muller blogs at Excess of Democracy. One possibility, Muller says, is that strong students who were destined to pass the bar exam studied even harder, raising the average MBE score but not raising bar pass rates overall. Another possibility, he said, “is that we’re just seeing unlucky jurisdictions and the scores will go way up in California and New York.”

Oklahoma lowered their bar passage requirements last year due to poor scores. Despite this, their pass rates didn't improve at all.

The respectable schools (those who've maintained student quality and refused to adopt quasi open enrollment in the wake of the decline in applicants) had better separate themselves and call for accountability of the worst actors quick, the draconian hammer is going to come down swiftly on law schools if the decreases in bar passage rates continue...