Starstruck States Squander Millions of Tax Dollars on Film Productions, USC Study Finds; Tax Incentives Handed to Filmmakers Offer Minimal Return in Terms of Job or Wage Growth Yet Some States Opt to Outbid Each Other for Films:

Nearly all 50 states have lured Hollywood productions with millions of dollars in special tax incentives for filmmaking, but new USC research shows the incentives fail to deliver the long-term economic benefits promised by industry lobbyists and lawmakers.

“The incentives are a bad investment. States pour millions of tax dollars into a program that offers little return,” said lead author Michael Thom, an assistant professor at the USC Price School of Public Policy who specializes in public finance. “We looked at job growth, wage growth, states’ share of the motion picture industry and the industry’s output in each state. On average, the only benefits were short-term wage gains, mostly to people who already work in the industry. Job growth was almost nonexistent. Market share and industry output didn’t budge.” ... 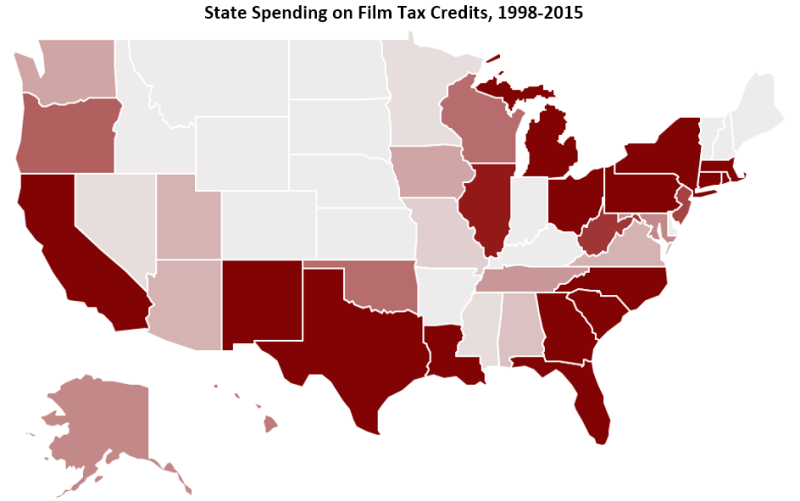 The five states with the greatest cumulative investment in the motion picture tax credits:

The first study [Lights, Camera, but No Action? Tax and Economic Development Lessons From State Motion Picture Incentive Programs], published in July by the journal American Review of Public Administration, examined the impact of the programs on states’ motion picture industry employment and wages. Thom found that the incentives had no sustained impact on wage growth and little effect on employment. The programs also failed to prompt an expansion or relocation of filmmaking businesses from concentrations in California and New York.

Abstract:  Despite mixed results, state government use of targeted economic development programs has escalated. This study evaluates the impact of motion picture incentive programs, an array of tax incentives employed by over 40 states to entice film and television productions out of California and New York, on labor and economic conditions from 1998 through 2013. Results suggest that sales and lodging tax waivers had no effect on any of four different economic indicators. Transferable tax credits had a small, sustained effect on motion picture employment levels but no effect on wages. Refundable tax credits had no employment effect and only a temporary wage effect. Neither credit affected gross state product or motion picture industry concentration. Incentive spending also had no influence. These findings demonstrate the heterogeneous impacts of different incentives offered under a single program and should inform future economic development policy design.

The second study [Fade to Black? Exploring Policy Enactment and Termination Through the Rise and Fall of State Tax Incentives for the Motion Picture Industry], published two weeks ago in the journal American Politics Research, examined why states kept or terminated their incentives from 1999 to 2015. Thom and PhD student Brian An of USC Price found a half dozen states ended the incentives as the Great Recession eased. States that slashed the incentives already had spent very little or had grown skeptical that the program wasn’t working, the researchers found.

Abstract:  Policy termination has received less scholarly attention than policy diffusion, and empirical state-level studies that examine the rise and fall of the same policy are mostly absent from the literature. This study assesses the factors that led more than 45 states to enact and some to later repeal Motion Picture Incentive programs, a collection of tax incentives aimed at facilitating job creation and economic diversification. We find program enactments were driven by rising unemployment and national but not bordering state imitation. Falling unemployment and national trends drove subsequent terminations, but in many states, their impact was overwhelmed by the influence of incentive spending, which greatly reduced termination likelihood. These results not only shed light on policy enactments and terminations in general, but also inform scholarship on state tax incentives and the role of competitive factors in their creation and repeal—or lack thereof.

Has there ever been a study showing government incentives work? I'm not aware of one.

The title says it all this credit system is more about easy-to-sell politics than revenue.