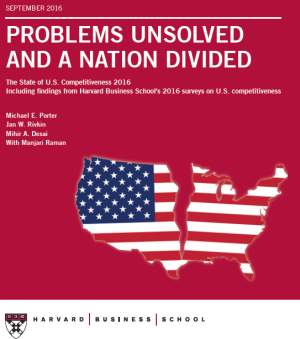 Harvard Business School (HBS) launched the U.S. Competitiveness Project in 2011 as a multi-year, fact-based effort to understand the disappointing performance of the American economy, its causes, and the steps needed by business and government to restore economic growth and prosperity shared across all Americans. We draw on surveys of HBS alumni and the general public to solicit views about the state of U.S. competitiveness as well as the steps needed to restore it.

This report provides an overview of our findings on the evolution of the U.S. economy, the state of U.S. competitiveness in 2016, and priorities for the next President and Congress, drawing on our research and the May–June 2016 surveys of alumni and the general public.

While a slow recovery is underway, fundamentally weak U.S. economic performance continues and is leaving many Americans behind. The federal government has made no meaningful progress on the critical policy steps to restore U.S. competitiveness in the last decade or more. ...

An economic strategy for Washington ... 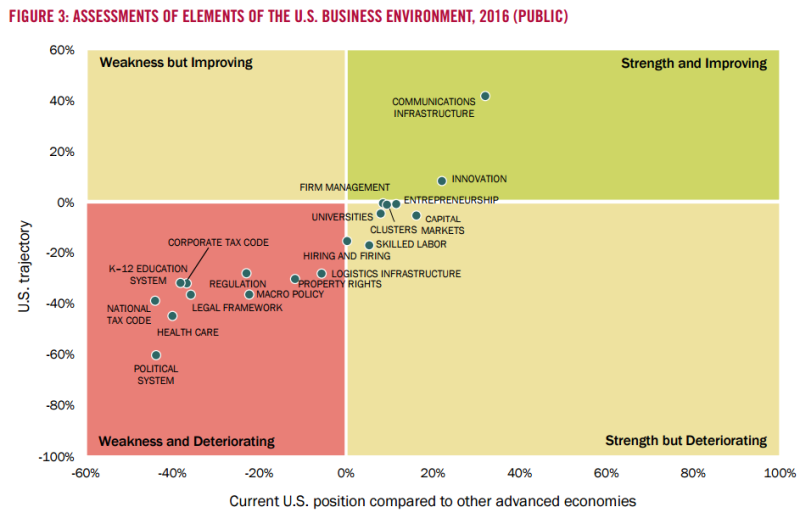 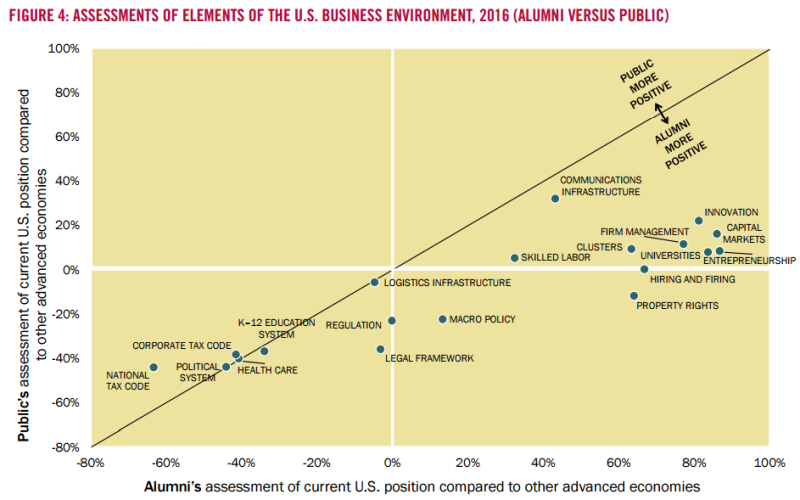 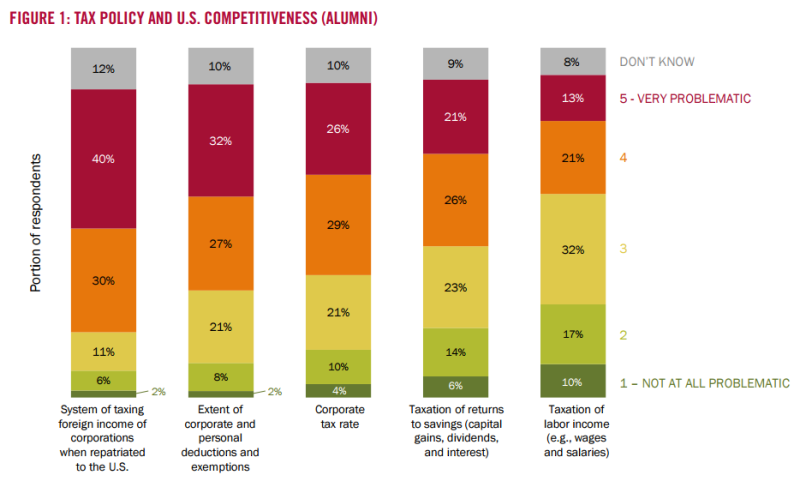 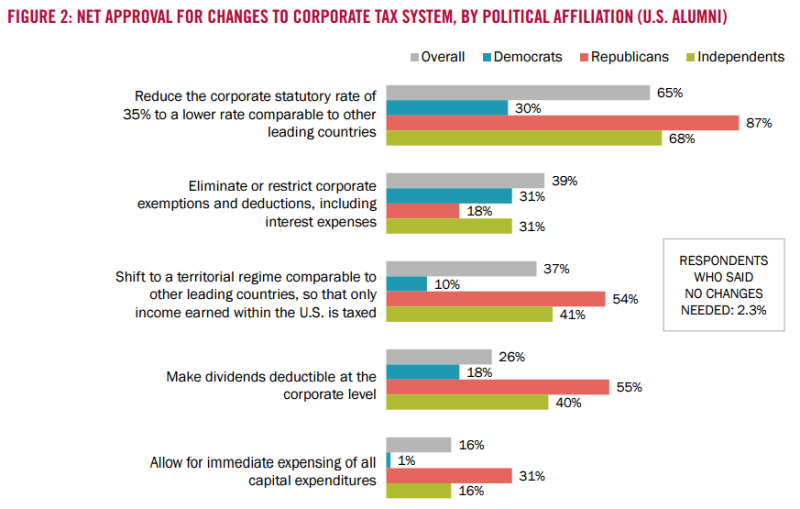 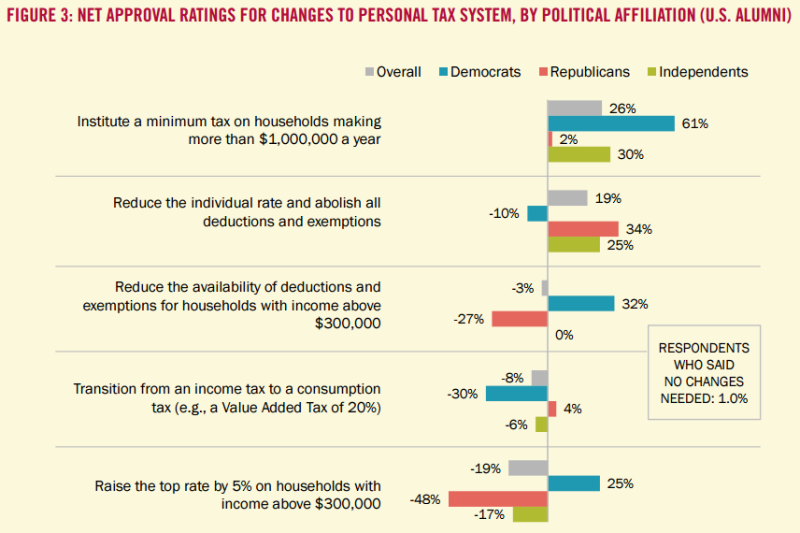 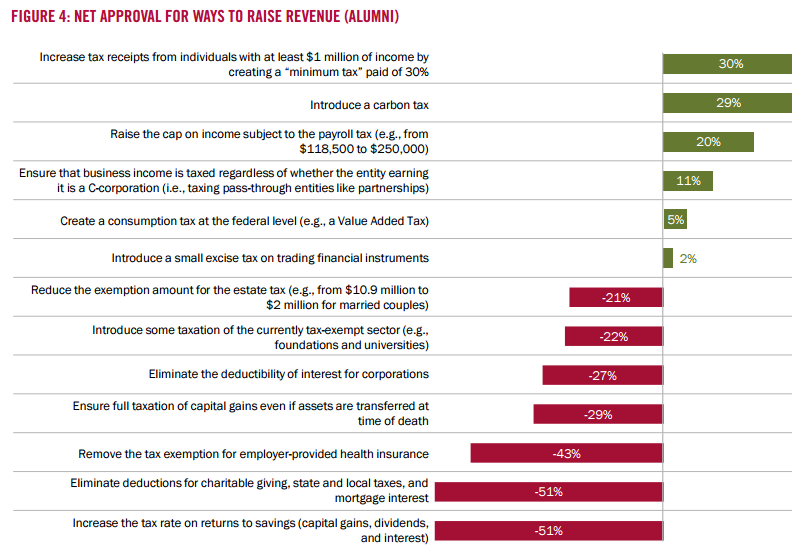 Businesses and entrepreneurs need time to assimilate and translate against risk broad and sweeping governmental intrusion. During the Great Recession, Congress chose to act (which is generally good) but did so poorly (in this case – for recovery purposes – it might have been better to address the status quo). In 2008, I posited that it would at least be 2017 before business would be able to see “where the dust settles” and some semblance of normality would be present.

Yes, corporate or entity tax reform would most certainly be helpful. As a tax attorney, it is clear that our tax system is so complex it can confuse the professionals. However, in the face of a “weaponized IRS,” it is going to be very difficult to build consensus to supplant a Code 103 years in the making. Professionals and bureaucrats exist simply to promulgate their livelihoods.

I spent yesterday afternoon speaking at a CLE on Dodd-Frank, the CFPB, Recent Consent Orders and the Proposed Rules of the CFPB. Passed with little bi-partisan support, still facing Constitutional scrutiny for its composition (violation of separation of powers), it has resulted in over 23,000 pages of regulation. Named for Barney Frank and Chris Dodd, the irony and hypocrisy is that they were the beneficiaries of special treatment (Friends of Angelo – Countrywide Bank) and resisted earlier cries to cure the mortgage market – yet used “the crisis” to further interject government into markets. It was passed on the rallying cry “too big to fail,” yet we have seen “big bank” growth since 2008 at a level estimated at 125%. This was in the face of failing to build a graduation into Dodd-Frank institution regulation architecture for size of the institution. As a result, “big banks” (who “had a seat at the table” during drafting) have had a huge advantage as a result of economy of scale over small, community and mid-sized banks. Thus, there is tremendous pressure by virtue of the Act for added conglomeration. This failure doesn’t even take into account the pressures relating to non-financial institutions, non-traditional lending sources and, quite frankly, the interference with the practice of law despite the Act expressly exempting attorneys from CFPB oversight. This juggernaut of an agency is a “chainsaw” of a cure where a “scalpel” was needed. This doesn’t count the “systemically important institution” fights (Financial Stability Oversight Council) of non-financial institutions or the broad investigative intrusions that are slowly being beaten back (at, I suspect, some significant cost)

Then, over the loud and vehement objection of the majority of the US voters (which resulted in a change in the composition of the US House), Congress passed the Patient Protection and Affordable Care Act – or, as more commonly described Obamacare. This Act has resulted in more than 33,000 pages of regulation. Ocare’s overall failure is in the news everyday concerning exchange failure, death spiral and is the rallying cry (as publicly postulated at the time of adoption) for the “single payer” (wholly government run) healthcare system. More devastating is to watch the rural small and community hospitals closing in counties across the country as the Medicare and Medicaid reimbursements dry up.

Next, turn to the new minimum salary base in the salary exemption rules being increased by more than 100%. Just yesterday, it made news that the NFIB is seeking extension of its imposition from the Department of Labor because businesses are claiming they haven’t had enough time to restructure their workforces. Although man has enjoyed the benefit of technology, the tension of work displacement has and will always exist. Where government seems to find incentive as cure to economic woes in driving salary base and minimum wage further upward – I postulate that these financial pressures have advanced job displacement by technology at least five years. Technology doesn’t come with unemployment compensation, healthcare costs, failure to appear, FMLA, workers compensation, etc.

These are just a few comments on how government has done virtually everything it could to “trip up” and delay a vigorous recovery. The retardation in economic expansion and job growth (certainly full-time) rests in the hands of those who came through the Great Recession virtually untouched and seem wholly disconnected from the realities of markets. It is a testament to the roots of our economy that we have experienced the recovery that we have. However, it is clear that the aggressive federal legislation has impacted the flow to the lower and middle class.