Erica Moeser, President of the National Conference of Bar Examiners, sent a memo to law school deans today. The memo reported the welcome, but surprising, news that the national mean score on the MBE was higher in July 2016 than in July 2015. Last year, the national mean was just 139.9. This year, it’s 140.3.

That’s a small increase, but it’s nonetheless noteworthy. LSAT scores for entering law students have been falling for several years.

The drop between fall 2012 and fall 2013 was quite noticeable: Seventy percent of ABA-accredited law schools experienced a drop in the 25th percentile score of their entering class. At 19 schools, that score fell 3 points. At another five, it was 4 points.

LSAT scores correlate with MBE scores, so many observers expected July 2016 MBE scores to be lower than those recorded in 2015. Moeser, for example, has repeatedly stressed the link between LSAT scores and MBE ones. She recently declared: “What would surprise me is if LSAT scores dropped and bar pass rates didn’t go down.”

Moeser just received that surprise: Students who began law school in fall 2013 had lower LSAT scores than those who began a year earlier. The former students, however, beat the latter on the MBE after graduation. ...

I offer four hypotheses in descending order of likelihood (from my perspective):

As bar results arrive at our schools, we need to think hard about who does the most to prepare our students for that required licensing exam; to diversify the profession by helping those with the least preparation; and to bolster our institutional pass rates. That work deserves far more compensation and recognition than it currently receives.

Given that bar exam scores hit a 27-year low last July, this is surely good news--particularly as the incoming predictors of law students across the nation continued to decline between the entering classes in 2012 and 2013. But there is an important matter of perspective: a 140.3 is still near all-time lows. 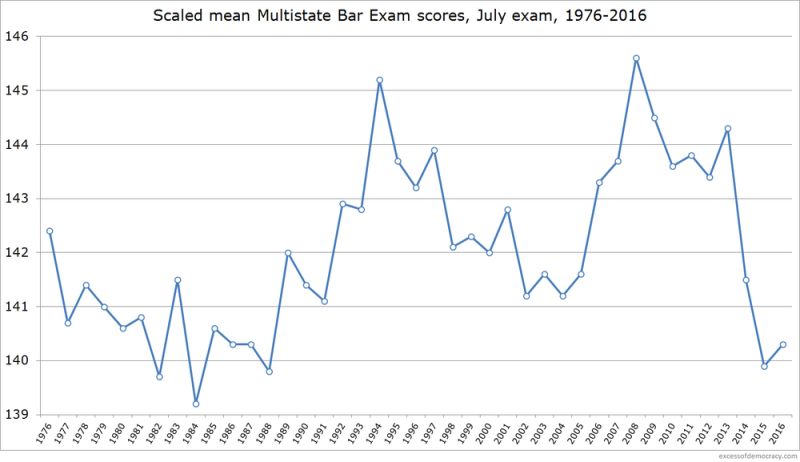 The July 2016 score is the second-lowest since 1988 (the lowest being July 2015), and still well off the mark of even the July 2014 score, much less the July 2013 score. In an absolute sense, the score is not good. Indeed, while modest improvements in the bar passage rates in most jurisdictions will be good news for those passing students and for law schools looking for any positive signs, they will not approach the pass rates of three or four years ago.

Let's wait to see how this translates to actual bar-passage rates. These are mean scores, not medians. If schools are emphasizing bar preparation across the board, then the increase could be accounted for in the stronger 50% of students. For example, maybe a lot of students who in previous years would score 145 are now scoring 148 with the increased prep. I know I didn't study as hard as I could have when I took it in 2009. Under such circumstances, the lower 50% (the only ones at risk of failing) could have lower average MBE scores than last year.