Hills:  UC-Berkeley Is Sacrificing Due Process In Re-Litigating The Sexual Harassment Allegations Against Former Dean Sujit Choudhry To Appease An Angry Mob 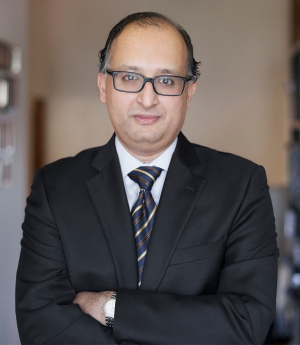 Following up on my previous posts (links below): Rick Hills (NYU), Is Berkeley Sacrificing Due Process to Appease an Angry Mob? The Sexual Harassment Case Against Sujit Choudhry:

How much and what sort of process is due in university sexual harassment administrative proceedings? The question, once for me a relatively academic question, has become painfully personal after Sujit Choudhry [right], a personal friend and the former Dean of Berkeley, was accused by his former administrative assistant of sexually harassing her.

Five years ago, I criticized my friend Peter Berkowitz for insisting in a Wall Street Journal op-ed that criminal procedures – in particular, the “beyond-a-reasonable-doubt” (BARD) standard -- be imported wholesale into university hearings where accusations of sexual misconduct are being adjudicated. Without taking any position on the right standard of proof, I argued that one could not automatically assume that the BARD standard was appropriate for a university’s administrative hearing where the stakes are not personal liberty but rather suspension or expulsion. The justification for criminal trial procedures favoring the accused is that the social and moral costs of convicting one innocent person vastly outweighs the costs of letting a lot of guilty people go free (the exact ratio of false positives to false negatives being a conundrum in which 1L criminal law professors delight). The appropriate ratio of false negatives to false positives in the university setting is, to my mind, a closer call. Because the procedural norms for these university adjudications are both hotly contested and reasonably disputed, I urged that the U.S. Department of Education not prematurely centralize them with OCR guidance documents but instead allow universities to experiment with different procedures.

Peter has now trained his sights on one of those decentralized experiments – namely, University of California’s attempt to re-try an accusation of sexual harassment against former Berkeley Law Dean Sujit Choudhry for which Choudhry has already been charged, investigated, and punished. This time I have to agree with Peter as well as with Brian Leiter and Slate: This is a Dr. Frankenstein’s experiment gone horribly awry. As Choudhry’s complaint in federal court alleges, there is an egregious assault on procedural due process going on at U.C. Berkeley. After the jump, I will offer my reasons for believing that President Janet Napolitano, the President of the University of California, is abetting mob justice in urging a do-over.

After the jump, I will plunge into the details of the Choudhry case (this is my longest blog post ever, for which I apologize, claiming as an excuse my desire to be especially scrupulous about the facts in an especially sensitive case). I will argue that these facts suggest why due process requires some sort of collateral estoppel in university sexual harassment cases. I emphasize that, as Choudhry’s friend, I am not impartial here. For the purposes of my plea for due process, however, my partiality is not a bug but a feature. It is precisely because all of us, myself as well as Choudhry’s now-numerous detractors, cannot be coolly impartial in cases like this that scrupulous adherence to norms of procedural fairness is essential. Holding a second hearing simply because there was a public outcry against the result obtained in the first is the antithesis of such procedural fairness, which is why I believe that Berkeley should be ashamed of what they are apparently about to do. ...

Choudhry relied on a proceeding represented to him as a final disposition of his case in which he waived procedural rights that could have saved his reputation from public fury, only to face a second proceeding that is being held for the sole purpose of assuaging that fury before a body that has publicly taken the side of his accuser. It is as if a defendant in a criminal case entered a plea bargain, pleading nolo in return for a sanction, only to have that bargain withdrawn when the public reacted angrily to the deal and have that very bargain used to whip up public anger against him.

Of course, as I acknowledged in the second paragraph of this post, a university administrative hearing is not a criminal trial. I reiterate that I would not import every aspect of due process in a criminal proceeding to the university context. But I also would not allow a public university to adopt a procedure for which no defense can be made beyond the political need to appease the public’s disagreement with an otherwise reasonable prior settlement. I agree with Brian Leiter and Slate, therefore, that Choudhry has a powerful procedural due process claim against this “do-over.”

I admit that, behind this general stance on an impersonal question of law, lies a more personal motive. A friend whom I believe to be a decent person may have been falsely maligned as a sexual predator. I might be wrong in my judgment about his character and my resulting inferences about his likely actions. But, no less than his accuser, he deserves to be judged by an impartial tribunal, not be by university officials intent on saving their own reputation by throwing him to the mob.

Maybe he will finally get that tribunal in federal court.

Simple Justice: When It’s Personal, The Virtues Of Due Process Become Clear, by Scott Greenfield:

What happened in the Dean’s Office at Boalt Hall, the University of California, Berkeley, law school? Enough to get the former dean, Sujit Choudhry, shit-canned as Dean and permanently tarred as a sexual harasser, even though it didn’t go as far as to strip him of tenure and burn a scarlet letter into his forehead. Choudhry is taking his case to federal court, and his friend, Rick Hills, has discovered the virtue of due process. ...

While Rick may not have been on board with OCR, he wasn’t exactly off board either. Experiment! It’s not as if anyone is actually harmed by toying with due process, feeling your way through how much process is really needed to be fair to a person. There may be collateral damage along the way, but that can’t be helped. Sorry your kid was expelled from school, his future ruined, his life in shambles, but we have to experiment! So sorry.

Until it touches your life. Choudhry’s university inquisition touched Hills’. Suddenly, he gets it. ...

In this instance, the issue is whether double jeopardy applies, as the mob isn’t satisfied that Choudhry wasn’t completely, totally, permanently destroyed. ...

Welcome to the world that trench lawyers have been telling you about, the one that academia has pretended didn’t exist so the mob wouldn’t call you mean names.  The time to prevail on the substance was in the first prosecution (yes, it’s a prosecution, because its outcome is punishment).  And that’s where due process is needed. How much? As much as is necessary to assure a fair opportunity to challenge the allegations, and even then, it puts the accused at a monumental disadvantage, just as in real court. But without due process, it’s a farce.

And what of this double jeopardy to appease the mob? This is the natural outcome of academia enabling the mob, creating the expectation that every “survivor” deserves to be believed, that every awkward glance is “sexual violence,” that the only outcome that matters is that females feel safe and valued. Academia and OCR created this mob, and now you realize it’s a nightmare.

When it was students’ lives being destroyed, you didn’t care very much. You went along. Even if you realized it was wrong, you didn’t want to risk being called “rape apologist” for standing up to the mob. Now that it’s your friend, you’re willing to take the chance. Welcome to the dark side of reality.

Nobody gives a damn until it touches their life. Now that it has, remember that it’s not just your pal, Choudhry, but every person accused of some campus sexual impropriety. Every one of them needs and deserves due process. The flagrant unfairness of being incapable of confronting accusations is no different for the students than it is for your friend, the former dean.

The real problem here is that a certain vision of feminism has failed to make people happy and needs victims to sustain itself. All of this will be looked at, 100 years from now, much like the earlier hysteria about homosexuality, child abuse, and so forth. It's a very sad spectacle, and it won't accomplish much of anything good.

Quote: "The real problem here is that a certain vision of feminism has failed to make people happy and needs victims to sustain itself."

That makes sense but I'd amend "make people happy" to "make its followers happy."

The same is true of many organizations for blacks, new and old. Some black communities have enormous problems that can't be easily blamed on white racism—such as high rates of violent crime.

Rather than deal with the real cause, a black criminal underclass, fatherless homes, and drug addiction, other targets are chosen, particularly the police. That, incidentally, is why even shootings by black cops trigger violent protests. Obsess over victimhood, and others always have to be blamed.

I see the problem slightly differently. The very liberal student/academic population perceives real issues of racism and sexism in the world. They are eager to demonstrate (loudly and publicly) their views, and they also desire to help by taking some action. However, they have very little power to help where the problem really exists (corporate America, deep south, etc.) therefore they focus all their energy on the few incidents that occur on their college campus. This was demonstrated in spectacular fashion at Yale and Amherst last year. The effect is that two (three if you count Berkeley) of the most liberal places on earth will become even more safe for women and minorities, but the rest of the world, where the real problems exist, remain largely unchanged.