Democratic presidential candidate Hillary Clinton would levy a 65% tax on the largest estates and make it harder for wealthy people to pass appreciated assets to their heirs without paying taxes, expanding the list of tax increases she would impose on the top sliver of America’s affluent.

The estate-tax increase and other new proposals that Mrs. Clinton detailed on Thursday would generate $260 billion over the next decade, enough to pay for her plans to simplify small business taxes and expand the child tax credit, according to the nonpartisan Committee for a Responsible Federal Budget [more here], which advocates fiscal restraint.

In all, Mrs. Clinton would increase taxes by about $1.5 trillion over the next decade, increasing federal revenue by about 4%, though that new burden would be concentrated on relatively few households. There is at least a $6 trillion gap between her plan and the tax cuts proposed by her Republican rival Donald Trump.

The Clinton campaign changed its previous plan—which called for a 45% top rate—by adding three new tax brackets and adopting the structure proposed by Sen. Bernie Sanders of Vermont during the Democratic primaries. She would impose a 50% rate that would apply to estates over $10 million a person, a 55% rate that starts at $50 million a person, and the top rate of 65%, which would affect only those with assets exceeding $500 million for a single person and $1 billion for married couples. 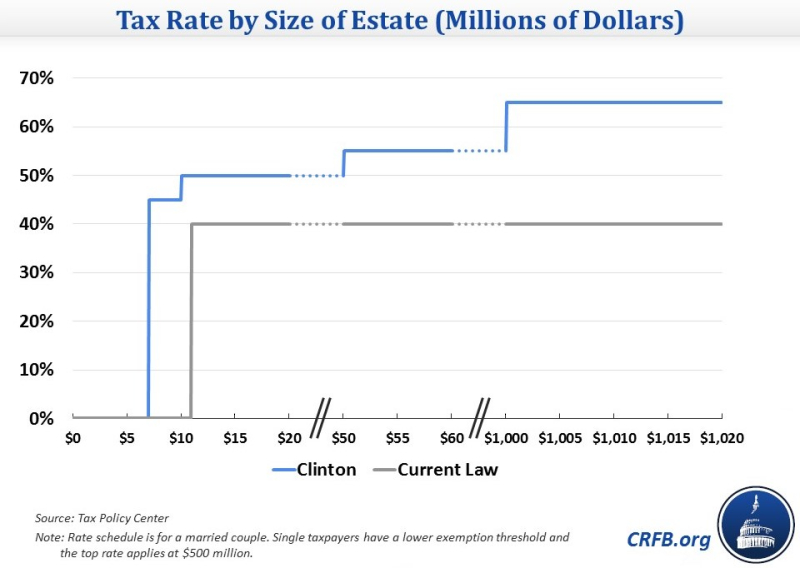 In 2014, just 223 estates with a gross value exceeding $50 million filed taxable estate-tax returns, according to the Internal Revenue Service. 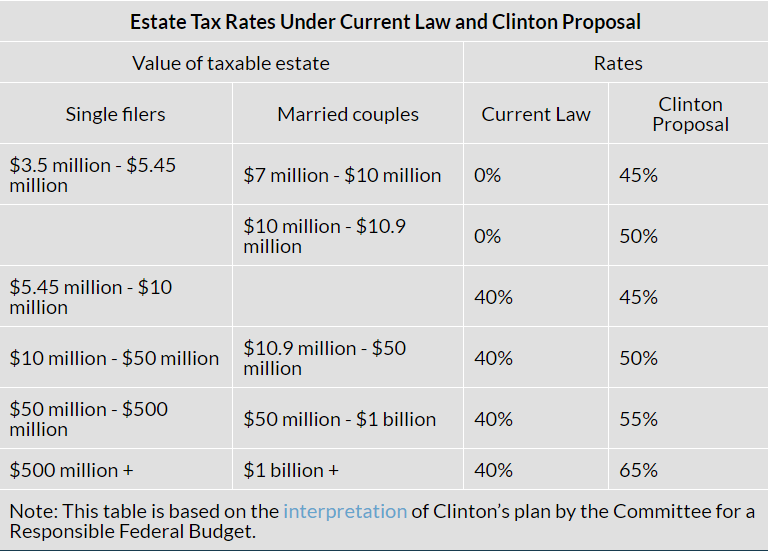 I estimate that the tax is expected to raise $600 millionin the first year after enactment.

For context, this is a drop in the bucket. The federal government raises more than $3 trillion in revenue each year; $600 million is a rounding error. Even in the context of the federal estate tax, which brings in $20 billion a year, adding a new 10 percent estate tax bracket for estates over $1 billion just wouldn’t raise that much. My estimate doesn’t even take into account the possibility that higher overall estate tax rates would lead to higher rates of estate tax evasion, or the macroeconomic effects of such a change.

All in all, Clinton’s proposed billionaires’ tax is more symbolic than anything. Throughout the campaign, Clinton has disavowed raising taxes on the middle class and embraced a set of modest tax increases on the wealthy; her latest estate tax proposals continue this approach.

For my perspective, see The One Hundredth Anniversary of the Federal Estate Tax: It's Time to Renew Our Vows, 57 B.C. L. Rev. 823 (2016) (reviewed by Jeffrey Cooper and Peter Reilly).

This analysis doesn't seem to address the carryover basis proposal that some articles suggest is part of her proposal?

Except that the uber-wealthy won't end up paying those taxes. They will avoid them -- with the help of the tax lawyers and accountants that they can afford to hire in order to protect their assets. There's an old joke: you can't tax the poor because they don't have any money; you can't tax the rich because they are slippery; so who do you really tax? The middle class. Just enough $ to make it worthwhile, but not enough $ to be able to hire all those tax lawyers and accountants to protect those assets.

Some cockroaches just have to be nuked.

She lost the election again today.

My hunch is that the revenue projections assume no avoidance measures. I think it's a safe bet that the small number of estates reporting values at the affected levels will undergo changes so as to be reported at much lower values or not be reported at all if these measures are enacted.