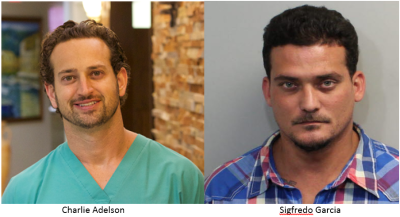 David Lat (Above the Law), The Dan Markel Case: A Notable New Document:

Earlier this week, we reported on prosecution efforts to find out who paid for the 2014 breast augmentation of Katherine Magbanua [more here]. If you’ve been following the investigation into the 2014 murder of law professor Dan Markel, you’ll recall that Magbanua is a key figure in the case. She is the mother of two children with Sigfredo Garcia, one of the two alleged hit men, and she is the ex-girlfriend of Charlie Adelson, the former brother-in-law of Dan Markel. At the time of his death, Dan was litigating against Charlie’s sister, Wendi Adelson, regarding various matters arising out of their divorce. ...

We now have more information about the breast-implants issue — and it could be interpreted in a light favorable to Charlie Adelson. We have the FD-302 (aka FBI interview notes) for Yindra Velazquez Mascaro, the friend of Katherine Magbanua who apparently told law enforcement about Charlie covering half the cost of the procedure. ...

Here’s the claim that Charlie Adelson paid for half of the cost of the breast enhancement surgery — evidence that yet again can be read in different lights. The sinister explanation: coming sometime in fall or winter 2014, a few months after Markel’s murder, the timing is right for Adelson’s contribution to the surgery constituting a “thanks” to Magbanua. The innocent explanation: the surgery came right in the middle of their relationship, Charlie Adelson was (and is) “well off financially” (as noted above), and perhaps he just wanted his girlfriend to have better breasts (which presumably he would reap the benefits of). ...

Garcia, with spotty employment and child-support obligations, might have been interested in getting more money — perhaps through a murder for hire, as law enforcement authorities allege. But one has to wonder whether he would have wanted to perform a contract killing at the behest of a man he disliked or even hated.

Here are some other possibilities to raise:

1. Charlie Adelson and/or another member of the Adelson family arranged for a hit on Dan Markel, but without any involvement by Katherine Magbanua — perhaps using ananonymous online marketplace (aka the “Dark Web”). In a pure coincidence, Sigfredo Garcia, a man connected to Charlie Adelson through a common girlfriend, happened to end up taking the job.

2. Someone totally unrelated to the Adelsons — as I wrote in a post shortly after Dan’s death, this could have been “a disgruntled student, an angry colleague, or someone else connected to his professional life as a legal academic” — arranged for a hit on Dan Markel through a transaction on the Dark Web. In a (very, very) unfortunate coincidence for the Adelsons, Sigfredo Garcia would up on the job. ...

3. Katherine Magbanua, acting on her own and without telling Charlie Adelson, arranged for Sigfredo Garcia and Luis Rivera to kill Markel.

The Adelson's response to the fake blackmailer was telling. They used the code word "TV" to refer to the blackmail payment. Charlie recommended killing the blackmailer and offered to hire a hit man. More coincidences?

Do you really believe Magbanua was innocent? The car was parked at her address the night before Garcia and Rivera drove it to Tallahassee?

Why was Donna Adelson called at 1:02am; for one minute, by her son Charlie the night the hit men arrived to Tallahassee, FL? Or, vice versa. (Was that normal for her and Charlie to call that late at night?)

Why did neither Katherine nor Rivera's girlfriend call police about the green metallic Toyota Prius car they saw around the exact time of the murder in Tallahassee, FL? Kathrine saw it before they left and Rivera's girlfriend saw it when they returned.

There has been no evidence of a financial transfer other than the absurd boob job theory. There is also no evidence of direct communication between the Adelsons and Garcia. I

No evidence law enforcement has added to the drip-drip-drip yet.

1. Garcia can't expose the Adelson's as hiring a hitman without exposing himself as the killer. That means the death penalty or prison for life. Under those circumstances, I really doubt the Adelsons would view exposure as a serious threat, or that Garcia would even make the threat.

2. Garcia being jealous of Charlie Adelson dating the mother of his children seems quite common and normal. It is also reported by one of Magbanau's friends, who presumably heard it directly.

3. Garcia turned off his phone during the murder. The first person he called an hour or so later when he turned his phone on was Magbanua. Logic indicates he was reporting the outcome. I actually find it more plausible that Garcia never spoke with the Adelsons, and perhaps didn't even know they were the client. The Adelsons, presuming they were involved, were quite careful about all this. There has been no evidence of a financial transfer other than the absurd boob job theory. There is also no evidence of direct communication between the Adelsons and Garcia. If they were being extremely careful, they would have had Magbanua arrange this without revealing their identity. Garcia may not have even known that Charlie was dating Magbanua at the time, and Magbanua would probably have been happy to protect his identity. When Garcia found out later who he did this for, it led to friction.

Lat seems to be looking for ways to exonerate Charlie. That is the way it should be but, really, a disgruntled student or law prof who hired a hit man on line and that hit line just also happened to know the family of the people who were evidently sick of Dan. Really?

There is another interpretation of Garcia's threats to Charlie. A contract killer who is down on his luck is likely to threaten disclosure to the person who hired him—or to approach other family members with the same threats.

I think the romantic relationship between Charlie and Magbanua is a red herring in this case. The Adelson parents also knew Magbanua; they worked with her and probably heard her complain about her violent ex. Once Charlie started dating her, they might have heard even more about the violent ex (in that one sense the romantic relationship might have contributed to the plot).

Let’s say that Donna Adelson, who had heard a lot about Garcia, decided to hire him to kill Markel—or even just to “rough him up” and Garcia took the assignment further. Having killed Markel, there’s little to stop Garcia from extorting more cash from the Adelsons. They certainly can’t complain to the police that their contract killer has turned to blackmail.

Charlie might not have known about the original contract, but it makes sense that Garcia would confront him if any of the Adelsons were involved. Charlie, after all, had plenty of money and would want to protect his parents (or sister, for that matter). For Garcia, there would be the added benefit of threatening a romantic rival.

Charlie might have told Magbanua that the threats were based on jealousy, or she might have interpreted them that way, but I bet these were threats against the Adelson family. I doubt that Magbanua knew about the contract killing; she was just the inadvertent source of information about a violent person.