In 2012, more than 100,000 big U.S. businesses managed to shelter billions of dollars of income in a single tax haven and pay no corporate income tax on it.

This tax haven is not Panama, Switzerland, or the Cayman Islands. In fact, it cannot even be found on a map—rather, it exists in the pages of the U.S. tax code. These businesses—with revenue of more than $10 million each—managed to pay no U.S. corporate income tax by pretending to be small businesses and thus saved their wealthy owners billions of dollars.

The share of income going to businesses that use the pass-through form of organization—and therefore pay no corporate income tax—has exploded over the last 30 years, growing from less than 25 percent of net business income in 1980 to more than half in 2012. In fact, the United States is unique in this regard: No other country comes close to having such a large portion of business income that is not subject to the corporate income tax. 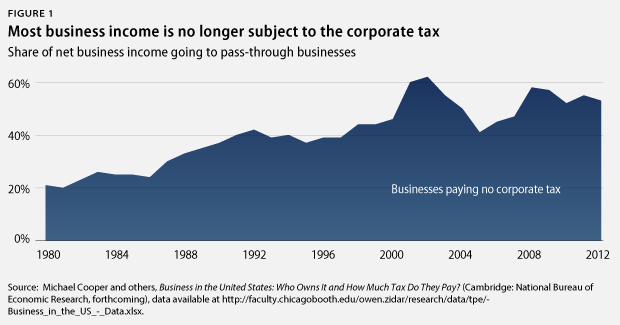 ... Policymakers must enact reforms to curb the extent to which very large companies can use pass-through forms of organization. Businesses should be able to organize however they want in order to run their operations as efficiently as possible. But the arguments in favor of pass-through taxation for some types of businesses, especially partnerships, become very weak when these entities are huge businesses that use this organizational form to avoid paying billions of dollars in taxes—businesses that would be taxed as corporations if not for the big pass-through loophole.

If we follow these people's point to its logical conclusion, sole proprietorships should also pay corporate income taxes, on top of personal income tax.

That's right, Eric. This avoidance of double tax loophole has to stop!!

Damn straight. And what about the dividends received deduction? It's just another outrageous loophole for the one percenters.

It is not right to identify a tax provision as a “loophole” unless the provision in question violates an important taxing principle necessary to a fair and efficient system of taxation.

In that connection here is one such principle: In general and except where important policy reasons or difficulties of tax administration dictate otherwise, an income tax should apply to all income with such being taxed when earned neither less than nor more than once.