A Fortune investigation into Gawker Media’s finances reveals that though [founder Nick] Denton is down, he is not out. As the company’s websites assailed tech giants like Alphabet, Apple, and Facebook for byzantine schemes meant to reduce their tax burden, Gawker Media quietly played the same game. Our investigation reveals that Denton is as much a creature of the tech industry as he is a critic—and that Gawker’s slippery but legal tactics may, in the end, help Denton survive Thiel’s crusade with funds to spare. 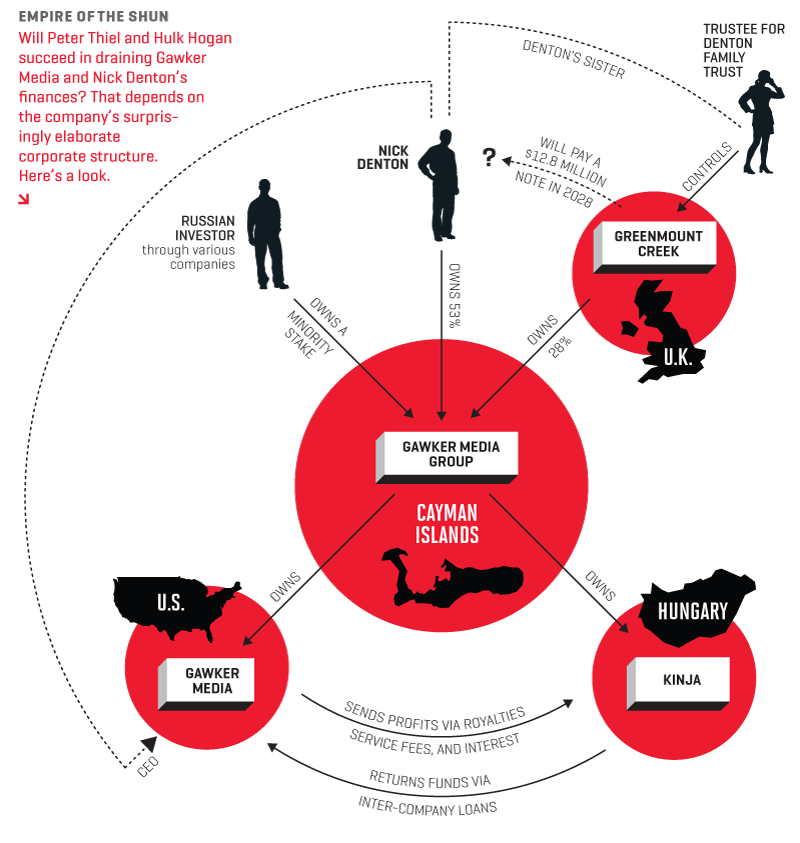 When Denton started Gawker Media 14 years ago, it was a U.S. taxpayer just like any other American small business. Its headquarters were in downtown Manhattan; its employees were mostly local. Today Gawker Media still operates primarily from New York City offices—it also has an office in Budapest—but it is now a Cayman Islands–based holding company with two subsidiaries: one in the U.S., one in Hungary. (Denton speaks Hungarian and has ancestral ties to the nation. The country also has highly favorable corporate tax policies.) For clarity, we’ll call the combined operation—U.S., Hungary, Cayman Islands—Gawker Global. According to various financial documents—among them U.S. tax returns, disclosures from Hungary, and documents released by the company in and out of court—Gawker Global used three tactics to reduce its U.S. tax burden.

The most common involves royalties. The overseas arm of a company bills its U.S. operation for licensing its intellectual property, such as website code or corporate trademarks. The arrangement allows the company to reduce its U.S. tax burden because there are fewer profits to tax. Gawker adopted this mechanism.

Gawker Global saved even more on taxes by outsourcing some of its U.S. functions—“editorial services,” “content creation services,” and others, according to bankruptcy filings—to its Hungarian subsidiary. Hungary would provide the U.S. with those services in exchange for substantial service fees, which counted as a cost against the U.S. subsidiary.

Lastly, as the legal costs of fighting the Hulk Hogan lawsuit piled up, Gawker Global raised the service fees and royalties that its U.S. arm was paying to its Hungarian arm—from $6.7 million in 2013 to $8 million in 2014—and immediately loaned the funds back to the U.S. with interest. That interest represents additional Gawker Global profit leaving the U.S.

Between 2010 and 2015, Gawker Global tallied more than $200 million in revenue and $59 million in profit, according to various financial records. Just 20% of Gawker Global’s profits were taxed in the U.S.; 80% escaped the clutches of the IRS. Of the total, 55% were U.S. profits diverted to Hungary, and 25% were profits that never entered the U.S. and were recorded in Hungary. Gawker’s U.S. tax rate during this period was 34%; its average tax rate in Hungary was 5%. With this scheme, Gawker Global managed to retain 29% of profits that it would have lost if it had reported the entire sum in the U.S.

Heather Dietrick, president of Gawker Media, defends the company’s profit parking. The company really does have an overseas tech operation of more than a dozen developers, she says, and the license payments are legitimate.

Meanwhile Gawker’s noisy editorial operation flourished as it skewered the rich and powerful, including corporate tax dodgers, with headlines like “Apple Avoided Paying Billions in Taxes” and “Airbnb, Just Pay Your Taxes and Follow the Law and Shut Up.”

The hypocrisy was not lost on Gawker’s employees. One former staffer says they used to joke frequently about how the company paid no taxes. (The ex-employee, like several others contacted for this article, declined to be identified for fear of reprisal.)