ABA Journal (Sept. 2016), Bar Fight: Exam Passage Rates Have Fallen, but Battles Over Why and What It Means Are Roiling Legal Education:

David Frakt is a lawyer, a lieutenant colonel in the Air Force Reserve and a former law professor who has studied the relationship between LSAT scores, undergraduate grades, law school performance and bar passage rates. But he may be better known as the candidate for dean of the Florida Coastal School of Law in Jacksonville (which had a July 2015 first-time bar pass rate of 59.3 percent) who was asked to leave the campus in the middle of his presentation to faculty and staff. He had dared to suggest that the school was risking its accreditation by admitting too many students with little or no chance of ever becoming lawyers.

Frakt concedes that some applicants with modest academic qualifications can excel in both law school and practice, but he says there’s a point below which a candidate’s aptitude for legal studies and legal reasoning is highly predictive of failure. “However dedicated and skilled law professors and academic support staff may be,” Frakt maintains, “there is only so much they can do with students with no real aptitude for the study of law. They are not miracle workers.” 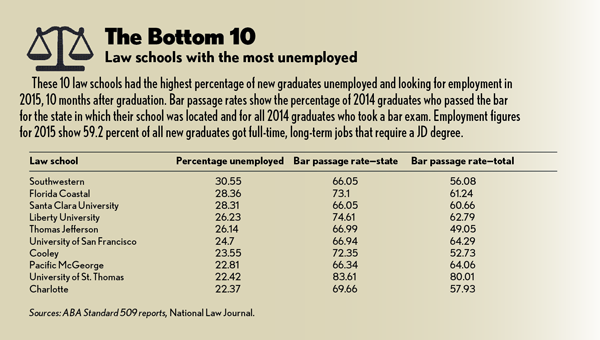 Not sure why they show the unemployed %. I just assume those are students that cashed in that million dollar premium and are living the dream now. 28% unemployment and 60% bar passage. I would gladly pay another 150k to get those delicious odds!!

About time for the ABA to face this disgraceful situation!
The 75% in two years proposal is still way too low and is only a fig-leaf on the problem of too many law schools admitting too many unqualified students! The schools profit handsomely admitting anyone who can draw breath because of the no-questions-asked federal loans for anyone they admit. They take no responsibility for the student's lack of potential for success or the heavy debt burden for the students with low credentials. Where is the ethics in admissions decisions? And law school is where future lawyers are supposed to be learning ethics and public-mindedness. Nothing but greed here! The feds are lax, so GO FOR IT! Take advantage of students, and stick the taxpayers with the bill! You wonder where public-mindedness went?
The schools should not be allowed to admit anyone that has little or no chance of success in the law. And if the schools cannot make ethical choices when the upside is $$$$ and the only downside for schools of too many poorly-qualified students is "possible" de-accreditation many years down the road by a regulator that is beyond "captured", then we need a new, tough regulatory scheme with reduced options for law schools, and certainly we need a new regulator who will enforce those reduced options. How can the public NOT see these bar-pass rates as anything but the results of having foxes guarding the chickens for many, many years?
I feel for the many law teachers who have been watching admissions standards decline for many, many years now. They have to teach all those unqualified students, then see the low bar pass rates for their efforts, wondering if the public sees those results as a reflection on their teaching abilities.
Such a disgraceful state of affairs!

Your points only prove how imperative it is that the ABA pass the 75% bar passage rule. Once that rule is in place, this silly debate about how and whether LSAT predicts bar passage becomes moot. School's have the burden of selecting a class that can pass the bar, and they can use any criteria they want. Of course they will continue to heavily rely on the LSAT because, no matter what they say now, they know it is the best predictive tool of success on the bar.

Bernstine's response strikes me as a massive non-sequitor. His organization's narrow suggested-use criteria for LSAT scores seems entirely irrelevant to the wholly empirical question of whether LSAT scores are a statistically significant (and thus useful) predictor of bar passage. Bernstine complains that LSAT scores by themselves aren’t (intended to be?) a good predictor of bar passage. LSAC’s intentions on this point are beside the point. It is very possible that a single-variable model of bar passage rates, in which LSAT scores alone are the independent variable, might show a statistically significant and substantively important relationship between the two, and, putting aside “omitted variable bias” concerns, such a study might be quite useful for guiding policy decisions about the best response to the current trend of worsening bar-passage rates. Moreover, it would be pretty easy to build a model that controls for other factors, negating Bernstine’s single-variable-model concern. Such a multivariate model would allow us to examine how good LSAT scores are with other factors—such as a student’s grade’s, gender, quality of school, etc—held at their median. This is basic stuff.

Rather than conduct a proper study that would explore these questions, Bernstine’s approach is to pretend that LSAC has some right, established by its guidelines, to prohibit such studies from ever taking place. In LSAC’s preferred world, LSAT data would be restricted by a license that prevents it from being used in any way that LSAC opposes—e.g. any way that threatens LSAC’s monopoly.