At Harvard Law School, Tim Kaine Was Driven By Faith 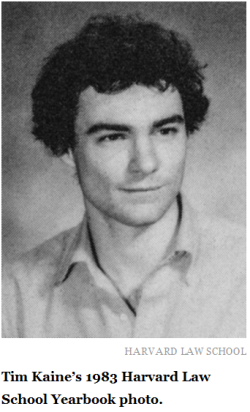 The Boston Globe, At Harvard Law, Tim Kaine Was Driven by Faith:

He was a year younger than most of his classmates, a state-school graduate and devout Catholic from the Midwest suddenly surrounded by Ivy Leaguers on a secular East Coast campus.

It was clear, when Tim Kaine arrived at Harvard Law School in the fall of 1979, that he was not exactly in his natural element. And it didn’t take long for him to lose faith in his chosen field on the cutthroat camp“

He had a crisis of purpose during his first year in law school when he realized most of his fellow classmates went on to become corporate lawyers with practices and principles with which he didn’t agree,” said Scott Brown, a New Hampshire energy investor who met Kaine on their first day of law school. “I encouraged him to veer off.”us of career-minded law students.

Kaine’s bumpy years at Harvard helped clarify what he wanted — and didn’t want — in life, friends said, and introduced him to some of the issues, like the death penalty, that he would later confront as a governor, senator, and, now, Democratic vice presidential nominee.

On a campus brimming with aspiring politicians, no one predicted Kaine would run for office, let alone second-in-command at the White House. He listened to Frank Zappa and Elvis Costello, talked earnestly about the women’s movement, racial injustice, and human rights, and spent part of his free time representing prisoners in parole and disciplinary hearings.

“He stood out by the things he didn’t do — which was spend all of his time trying to impress you somewhat desperately, which is a characteristic of the majority of the people who graduate from Harvard Law School,” said Brian Koukoutchos, a fellow member of the class of 1983. “That’s one of the things that made him likable and genuine.” ...

“I had never set foot on campus till the day I showed up for the first day of classes and it was a bit of a culture shock going from the Midwest — where I had spent my life and I hadn’t done very much traveling at all — to go to law school in Cambridge,” he said in a recent C-SPAN interview.

“He was a little unusual in the group of law school students who were interested in social justice issues in that he was so clearly committed to his faith,” said John J. Butler, a classmate and friend. “I thought it was admirable — a little different — but admirable.” ...

Some of those friends flew to Philadelphia last week and watched from the audience on Wednesday night as the curly-haired classmate they once knew accepted the Democratic nomination for vice president on a ticket with Hillary Clinton.

“If you had asked me who would have been the least likely person to go into elected politics, he would have been the one,” Brown said. “It is shockingly encouraging that someone of his deep commitment and just general decency has gotten to that level.”

Mr. Deco: What exactly do find curious about a state that elects a Republican legislature and a Democratic governor? That is precisely what one would expect when the legislative districts are Gerrymandered by Republicans. Pennsylvania has the same situation. In Pa. in the off-year 2014 congressional election, Democratic candidates collected 44 percent of the vote, yet Democratic candidates won only 5 House seats out of 18. In a non-Gerrymandered election, one would predict an eight-seat congressional delegation. 2012 was even worse. Democratic candidates won 200,000 more votes state-wide, but still only won five seats. But never fear, the worm always turns. 2020, the next decennial redistricting year, will not be an off-year election.

He isn't a devout Catholic. He's a votary of social work. It's a reasonable wager that most bishops are content with that, including the current Bishop of Rome.

It is curious that both U.S. Senators from Virginia are Democrats when most of the legislature and the House delegation are Republicans; that both are standard-issue liberal Democrats; that both are city kids from the Midwest who never lived in Virginia prior to age 25; that both attended Harvard Law School; that one made his career in NoVa, that portion of Virginia that has not a trace of the South in it; that the other began his career in municipal politics in Richmond, and managed to prosper even though Richmond was a wreck during his tenure on the city council and in the mayor's chair.

Kaine is driven by faith, Clinton by values, and Trump by anger, rage, etc. Nothing like unbiased reporting!

I'd have a lot more faith in Kaine's faith if he didn't conveniently seem to discard it anytime it conflicts with the principles of the Democratic Party.

"Tim Kaine Was Driven By Faith"

Ah, you can tell we're in an election cycle. The liberal press—here the Boston Globe—is doing their best to puff Democrats and slander Republicans. And they're doing that in this case even though the Democratic team is headed by a crook, a liar and an decades-long enabler of her sexual-predator husband. And they're doing that even though the Republican is, exceot for his faux-anti-establishment rhetoric, far more a Democratic than a Republican.

And come to think about it, there's a lot of similarity between Hillary's lying and slandering and that of the press. They're like two peas in a pod, rotten peas certainly, but nasty, lying, slandering, look-alike peas.