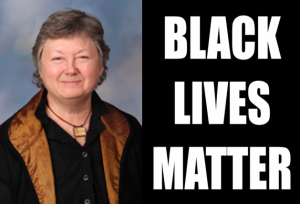 Following up on Saturday's post:  Inside Higher Ed, The Law Professor Who Answered Back:

A few months ago, one or more anonymous students wrote a note to their law professor, complaining that she had been spotted at least once on campus wearing a Black Lives Matter T-shirt. The letter said wearing the shirt was "inappropriate" and "highly offensive." Further, it said "we do not spend three years of our lives and tens of thousands of dollars to be subjected to indoctrination or personal opinions of our professors," and urged the professor to avoid "mindless actions" that might distract students at a law school where not everyone is passing the bar.

The professor wrote back, not only defending her T-shirt, but also critiquing the students' understanding of the professor-student relationship. While the incident took place earlier this year, the students' letter and the professor's response went viral in the last week, as Black Lives Matters protests resumed after the killings of black men in Louisiana and Minnesota. Many have been applauding the professor, while some noted a lack of any information on who she was and whether the letters could be verified.

The professor is Patricia Leary, and she's been teaching at Whittier Law School since 1992. She's traveling right now andInside Higher Ed was unable to reach her directly. But the law school confirmed that the letters were legit and she was the author. Whittier is known for its diversity: nonwhite students make up a majority of the law school's student body.

From her faculty webpage:

Professor Leary began her law career in Florida as a judicial clerk, legal writing teacher, and director of a legal policy clinic. She moved to California after receiving a Masters degree in Law from Columbia University and has been teaching at Whittier Law School since 1992.

As a Distinguished Teaching Professor, she sees her life’s work as student-centered, both inside and outside of the classroom. She is deeply committed to teaching students to think clearly and critically about law, to helping students to refine the art of legal reasoning and analysis, and to encouraging students to navigate with joy and purpose the life changing experience of law school.

Professor Leary is also actively involved in the life of the campus community. She devotes a great deal of her time to coaching students in appellate advocacy, and serving as faculty advisor to numerous student organizations. In 1999 she helped to found On Common Ground, a student organization that annually produces a series of events designed to raise awareness of multiple social and legal issues including race, class, gender, and sexual orientation.

"The Law Professor Who Answered Back:"

How about "The Idiocy of Inside Higher Ed."

To pretend that professors do not hold immense power over their students (who *are* paying tens of (borrowed) thousands for the privilege of being defrauded and indoctrinated) is simply obscene.

Inside Higher Ed would be the first to shriek about various PC approved species of "privilege" - yet, somehow, in lefty bizarro world the person with all the power here is the poor, pitiable besieged victim, driving home to her McMansion in her McMercedes - funded by fraud and Federal student loan payola.

Decades of this idiotic, unrepentant sh*t-shoveling is what has utterly discredited the alleged mainstream media in this country.

How does anyone who has studied law write this? -- “there is something called ‘Law’ that is objective, fixed and detached from and unaffected by the society in which it functions.”

The email writer cowering behind his or her nom d’ Internet either is not a law student or is not paying attention in class. Law does not exist in the aethers, but is a product of society. The laws of arid regions empower water commissioners; of swampy regions drain commissioners. Our laws would be different if we walked on four legs, reproduced asexually or lived forever.

Perhaps this student grew up in the fictional Pleasantville, where the textbook pages were blank and everyone adhered to the “nonchangist view of history” until a disruptive force changed the law – and everything else.

Cas127: if there was a vaccine to inoculate you from ignorance, you would probably decline on religious grounds.