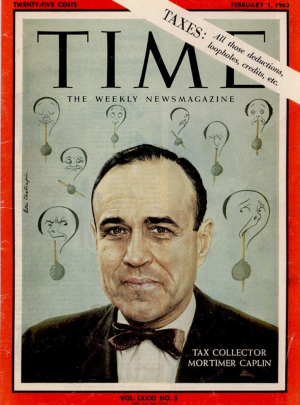 His name is well-known to every graduate of the University of Virginia’s School of Law, and his penchant for bow ties is almost as famous. Over the course of a career in law, education and government service, Mortimer Caplin has seemingly lived several lifetimes, each distinguished by remarkable and influential achievements, from his time as an actor and boxer when he was a UVA undergraduate, to his service in the U.S. Navy on D-Day, to his work as IRS commissioner during the administration of President John F. Kennedy, and beyond.

On July 11, Caplin will celebrate his 100th birthday, providing an excellent occasion to look back over the accomplishments of, in the words of former Law School Dean Robert Scott, “an exemplar of a professional life well-lived.” In honor of this milestone, we spoke with Caplin and some of his peers and colleagues about highlights of his life and career. ...

He returned to UVA Law in 1950, teaching classes on corporations and taxation. It was during this time that he taught Robert and Ted Kennedy of the classes of 1951 and 1959, respectively.

“Bob didn’t volunteer very much, but he was a better student than Ted,” Caplin remembered. “I got to like Bob very much when I came to Washington, when he was attorney general, and we worked very closely together. He was a real star.”

It was through the younger Kennedys, and Bill Battle, a 1947 Law School alumnus and partner in a Charlottesville law firm, that Caplin met John F. Kennedy, who was visiting the University during his campaign for president. After Kennedy was elected, Caplin received a phone call from Ted Sorensen, Kennedy’s chief adviser and speechwriter, asking if he wanted to join his “tax task force.”

“I didn’t wait very long to give the answer,” Caplin said.

In 1961, Caplin became the IRS commissioner under President Kennedy, and in 1963 he appeared on the cover of Time magazine in that role. “We were trying to change the underlying philosophy” of the IRS, Caplin explained. “We put the emphasis on better self-assessment, and not so much on putting people in jail.”

George K. Yin, Edwin S. Cohen Distinguished Professor of Law and Taxation at UVA, said that Caplin’s commitment to the rule of law and to public service were vividly illustrated in his time as IRS commissioner.

“He really emphasized the importance of full compliance with the law and promoted policies and practices to help taxpayers achieve that objective and help the agency enforce it,” Yin said. “He is extremely proud – rightfully so – to have gotten President Kennedy to visit the IRS to speak to the employees during his tenure as commissioner – the only president to do so. Mort understood full well that the work of the staff who perform the thankless task of collecting taxes really epitomizes public service.”

When Caplin left the IRS in 1964, he received the Alexander Hamilton Award, the highest honor conferred by the secretary of the Treasury.

Soon after leaving the government, Caplin founded the tax firm Caplin & Drysdale with a former law student of his, Doug Drysdale, class of 1953.

“Mort had identified a number of very talented young lawyers working for the Treasury and in the IRS chief counsel’s office,” Drysdale said. “That first year or so a number of those lawyers joined us. Our objective was to have a firm of highly talented people and do good work.” The firm emphasized hiring people with a sense of public service and did very little lobbying.

“Mort was very generous, both in a financial sense and in relation to the management of the firm,” Drysdale added. “It was possible for a young person to advance more quickly than in most typical firms.”

The boutique firm has now been in business for more than 50 years – “a good sign,” Drysdale joked.

Michael Graetz, a 1969 Law School alumnus, tax law expert and former member of the Law School faculty currently serving as the Columbia Alumni Professor of Tax Law at Columbia Law School, noted that Caplin played an important role in institution-building in his time as IRS commissioner and in founding Caplin & Drysdale. “He’s a far-sighted individual,” said Graetz, who has also served on the annual Virginia Tax Study Group, a conference hosted by the Law School, with Caplin. “He saw an opportunity to create a law firm and build it by hiring Supreme Court clerks, which was not an obvious thing for a tax practice. He hired the best people he could possibly find.”

This is a serious question - Is there any way I could meet this man? How?