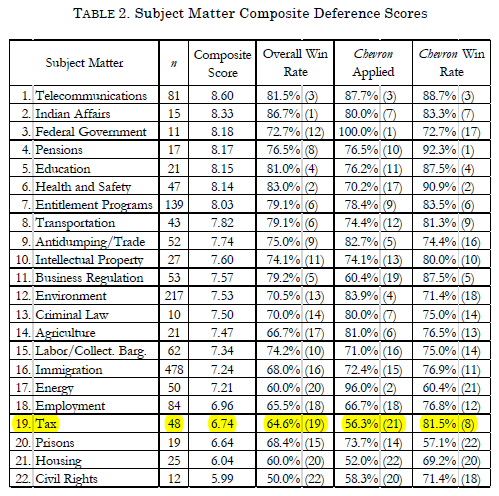 [I]t perhaps should come as no surprise that tax ranks nineteen out of twenty two in light of entrenched tax exceptionalism. At 56.3%, moreover, tax was second to last in the rate at which circuit courts applied Chevron deference. Indeed, it was not until 2011 that the Supreme Court announced that certain IRS interpretations are entitled to Chevron deference—a position that the Supreme Court may have qualified last year in King v. Burwell, at least with respect to questions of deep political or economic significance. ...

The table is interesting, but the interpretation is wrong because of the Priest-Klein effect. The win rate does not reflect the court's bias, since if, for example, a court was very deferential to the IRS, the IRS would press the most outrageous cases in that court, where it might win, and might end up with a lower-than-average win percentage because it even brought cases that other courts would have laughed at or sanctioned.