Local taxes put Zipcar and Car2Go at a disadvantage in competing with ride-hailing services Uber and Lyft, research by DePaul University shows.

For the millions of Americans without cars, daily errands often require a quick calculation: Is it cheaper and quicker to hail a ride, via apps such as Uber or Lyft, or to use a car-sharing service, such as Zipcar or Car2Go?

Local governments around the country are tipping the scales and helping to shape the industry’s winners and losers. In recent years, cities have increased taxes on the car-sharing industry but not ride-hailing, according to new research into the competitive landscape of the fledgling industries.

Of the 40 largest U.S. cities, 29 apply taxes of more than 10% on one-hour car-sharing trips, including nine cities with effective tax rates above 30%, according to an analysis of car-sharing taxes by Joseph Schwieterman and Heather Spray of DePaul University’s Chaddick Institute for Metropolitan Development [When Sharing Is Taxing: Comparing the Tax Burden on Carsharing Services in Major U.S. Cities] ... 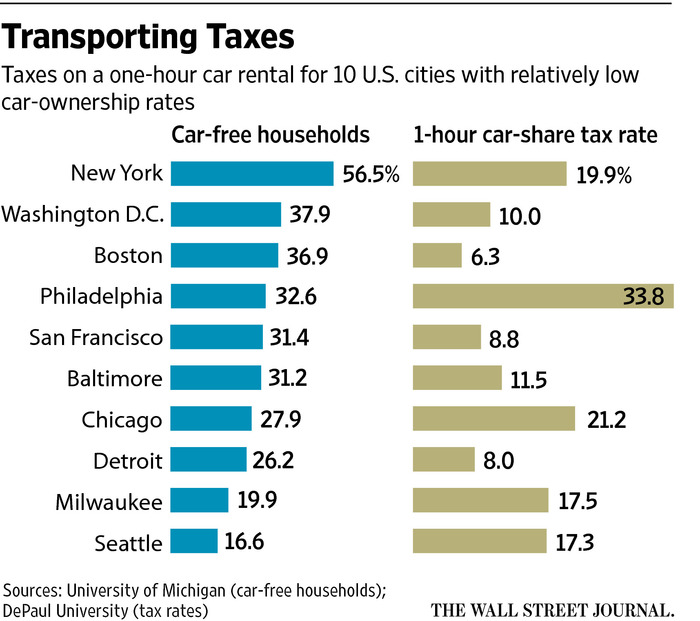 The taxi industry has long protested that it faces a far heavier regulatory burden than ride-hailing services, putting taxis at an unfair disadvantage. The new research suggests car-sharing has been put a similar disadvantage by local authorities. Car-sharing companies allow members to use vehicles for trips as short as an hour or even less, such as driving to the grocery store and back. Zipcar, owned by Avis, is the largest car-sharing firm. Enterprise operates short-term rentals, as does Car2Go, owned by Daimler AG. Many cities have local car-share programs, too.

For tax purposes, car-sharing services typically are treated as short-term car rentals, and must pay rental-car taxes. Those taxes often are intended to extract revenue from business travelers, although in practice many are applied on a per-transaction basis. A business traveler might barely notice a $4 tax on a $100 car rental for a multiday trip. Someone paying $4 in tax on an $8 one-hour rental, however, is far more likely to take notice.

Ride-hailing companies such as Uber and Lyft allow people to summon a car and driver, via smartphone, to take them to their destination. A short trip, such as to a nearby grocery store, might cost about $5 in each direction.

The team at DePaul determined the local fees and surcharges applied to car-sharing in 75 cities, and documented how these fees have risen in the past five years. While some cities also apply taxes to ride-hailing companies, the report found most cities don't collect retail taxes on ride-hailing.

Evidence suggests consumers are beginning to move away from the car-sharing model, as a result.

In 2015, the number of car-sharing members in the U.S. declined for the first time in more than a decade of data, according to earlier research from Susan Shaheen and Adam Cohen of the University of California, Berkeley. 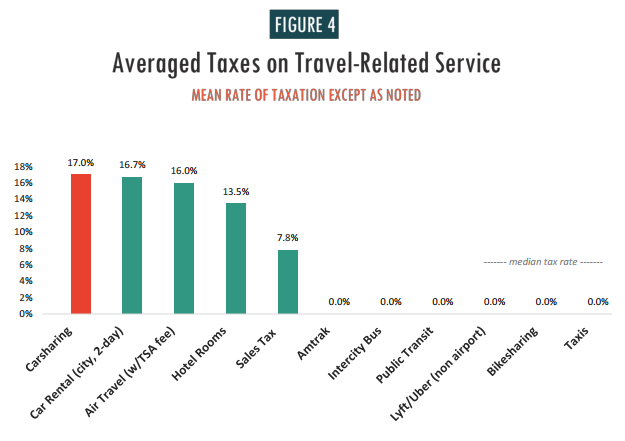