Did Trump Violate IRS Rules By Using His Foundation's Money To Purchase Tebow-Signed Helmet (Now Worth $415) For $12,000? 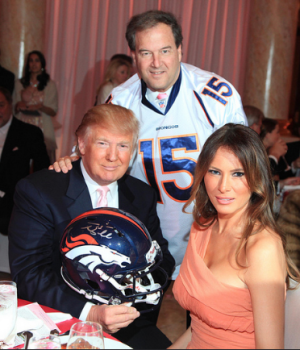 Did Donald Trump violate IRS rules, by using a charity's money to buy himself a signed football helmet?

Four years ago, at a charity fundraiser in Palm Beach, Donald Trump got into a bidding war at the evening's live auction. The items up for sale: A Denver Broncos helmet, autographed by then-star quarterback Tim Tebow, and a Tebow jersey.

Trump won, eventually, with a bid of $12,000. Afterward, he posed with the helmet. ... But Trump didn't actually pay with his own money. Instead, the Susan G. Komen organization — the breast-cancer nonprofit that hosted the party — got a $12,000 payment from another nonprofit, the Donald J. Trump Foundation.

Trump himself sent no money. (In fact, a Komen spokeswoman said, Trump has never given a personal gift of cash to the Komen organization.) He paid the bill with money from a charity he founded in 1987, but which is largely stocked with other people's money. Trump is the foundation's president. But, at the time of the auction, Trump had given none of his own money to the foundation for three years running. ...

Afterward, three experts on tax law questioned whether Trump had violated IRS rules against "self-dealing" — which are designed to keep nonprofit officials from using their charities to help themselves.

Those rules ban the "furnishing of goods" by private foundations — like Trump's — to their own officers. If the rule is broken, the person who breaks it must notify the IRS and may have to pay a tax penalty. There could also be penalties for signing a tax return that failed to mention the violation. In 2012, the tax return for Trump's foundation checked the boxes for "no," it did not break the self-dealing rule. ...

The same kind of autographed helmet and jersey that Trump bought for $12,000 are now available for about $415, total, online.

Mr. Woody: The Clinton Foundation's returns and Hillary Clinton's returns are publicly available. Please identify the "political influence and compromise [of] national security and [laundering of] illegal foreign contributions for campaigns" you are alleging. And where are Mr. Trump's returns so that we can see the relationship between the Trump Foundation and the candidate?

Did Trump use his foundation to sell political influence and compromise national security and to launder illegal foreign contributions for campaigns? Oh, wait. That's another candidate.

Maybe the charity is going to suit up and throw a few passes....