Why Does The IRS Need So Many Guns? 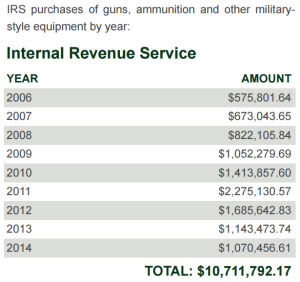 The number of non-Defense Department federal officers authorized to make arrests and carry firearms (200,000) now exceeds the number of U.S. Marines (182,000). In its escalating arms and ammo stockpiling, this federal arms race is unlike anything in history. Over the last 20 years, the number of these federal officers with arrest-and-firearm authority has nearly tripled to over 200,000 today, from 74,500 in 1996.

What exactly is the Obama administration up to?

On Friday, June 17, our organization, American Transparency, is releasing its OpenTheBooks.com oversight report on the militarization of America. The report catalogs federal purchases of guns, ammunition and military-style equipment by seemingly bureaucratic federal agencies. During a nine-year period through 2014, we found, 67 agencies unaffiliated with the Department of Defense spent $1.48 billion on guns and ammo. Of that total, $335.1 million was spent by agencies traditionally viewed as regulatory or administrative, such as the Smithsonian Institution and the U.S. Mint.

Some examples of spending from 2005 through 2014 raise the question: Who are they preparing to battle?

People from both ends of the political spectrum have expressed alarm at this trend. Conservatives argue that it is hypocritical, unconstitutional and costly for political leaders to undermine the Second Amendment while simultaneously equipping nonmilitary agencies with heavy weapons, hollow-point bullets and military-style equipment. Progressives like Sen. Bernie Sanders have raised civil liberties concerns about the militarization of local police with vehicles built for war and other heavy weaponry.

Meanwhile, federal authorities are silent on the growing arsenal at federal agencies. In fact, we asked the IRS for an asset accounting of their gun locker—their guns and ammunition asset inventory by location. Their response? “We don’t have one [an inventory], but could create one for you, if important.”

Our data shows that the federal government has become a gun show that never adjourns. Taxpayers need to tell Washington that police powers belong primarily to cities and states, not the feds.

Actually there is no reason for them to have ANY guns. They are a collections agency, that's a clerical desk job.

Was this the incident you were referring to?

Because the one injury reported was one of the Bundy boys and the only person killed was a fellow anti-government kooks who the FBI said was reaching for his gun.

So, are you uninformed or just dishonest?

Right wing anti-government threats are all over. Ex. 1. Those heavily armed wankers in Oregon who took over a Wildlife Refuge. They took out the Park Service ranger running the gift shop filled with stuffed animals and the 72 year old volunteer docent who gives the grade school tours.

Attention conspiracy clowns and otherwise moronic commenters: IRS special agents make arrests. They encounter some very bad people with criminal records and weapons. There is no weapon or kit (body armor, etc.) in the IRS-CI arsenal that is not easily explainable as being necessary. Rifles and shotguns are not routinely deployed. And you, the former revenue agent from 1857, STFU; you know little of what you speak in 2016. My only beef is that the dufus CIR has armed security detail. Lois Lerner should have been assigned to protect him.

There is also the possibility the federal agencies have been encouraged by higher ups to make such purchases, to help deplete the market of arms and ammunition. Recall the recent shortages of ammo with bare shelves for some types. The current administration is so anti-Second Amendment it will do anything within its power to thwart that Constitutional Right of the American people.

"1. Federal agencies are filled with insecure males who've seen too many action movies. This is their rather pitiful attempt to appear macho. Think of the creepy guy in True Lies."

Add men and boys and the price of toys, and you're on to something. There were various agencies training at Quantico as early as the 70s. Indeed, you can draw a straight line between the ATF playing army and Waco. Of all the federals, everyone knew ATF agents were a bunch of cowboys (secret service wasn't far behind). Even when the sheriff told them to wait them out, ATF couldn't stand it. They found out the hard way it doesn't take much training for the other side to pull a trigger.

Years ago I read a paperback thriller in which the heroes were up against corrupt FBI agents. They ended up getting help from the IRS's SWAT squad (which they were very surprised to learn even existed).

Don't expect him to quantify those threats, I don't think the government even makes that kind of thing public. But in terms of actual attacks, there have been only 4 identified by the federal govenment as anti-government terrorism since the Oklahoma City bombing. 7 people died in those attacks, not counting the perpetrators, and 19 were injured (mostly from the guy who flew his plane into the IRS building in TX).

The vast majority of deaths and injurites in terrorist attacks in the U.S. since 1995 were due to a different ideology, one that isn't homegrown whatsoever.

"Unfortunately, security threats to such buildings are increasing, fueled in part by right-wing anti-government rhetoric."

Any proof of that accusation? Another tool far more afraid of what 'right wing' terrorists might do versus what Islamic terrorists are doing. Either you are insane or are just a partisan hack.

As usual, a well-written piece gets overshadowed by terrible comments. Was the IRS in Benghazi? Is there a single crime the RIAA needs weapons to enforce? People are missing the point: the militarization of these agencies trickles down into ordinary policework, which means, these days, you're likely to be served with a bench warrant by a dozen cops who kill your dog and shoot your son in the back because he's running. "right wing," "left wing," WHO CARES? The firearms are not the issue, the issue is that this administration has ratcheted up the minimum-safe-distance between a public servant and their JOB.

Security systems for non-military government buildings were introduced after the 1995 attack on the Alfred P. Murrah Federal Building in downtown Oklahoma City by Timothy McVeigh and Terry Nichols, which killed 168 people, mostly government workers (including IRS workers), and injured more than 680 others. Unfortunately, security threats to such buildings are increasing, fueled in part by right-wing anti-government rhetoric. I find it ironic that the current Administration should be criticized for providing too little security for the Benghazi consulate but too much for other non-military installations. (The non-DOD gun purchases that Coburn and Andrzejewski condemn include State Department purchases to protect consulates elsewhere.) I am confident, however, that if another attack on a US government building were to occur tomorrow, Mr. Coburn would change his mind and condemn the current Administration for buying too few guns.

Two possibilities, both of which could be true:

1. Federal agencies are filled with insecure males who've seen too many action movies. This is their rather pitiful attempt to appear macho. Think of the creepy guy in True Lies.

2. There are severe restrictions on the use of the military for social control, for example mass arrests of non-violent citizens in some roundup. Deputizing thousands of already trained and armed federal employees from the IRS, the VA etc. could be used in their place. To make them more compliant, they could be flown far away from their local communities.

The second also meshes quite well with the hysterical and dishonest efforts by liberals to disarm ordinary, law-abiding citizens, as opposed to criminals and terrorists, who'll ignore any such laws.

All you have to do is put the pieces together. They form a consistent pattern of transferring power from the people to the federal government.

Because this is about the government's money.

What;s the shelf-life for the billion and a half hollow point bullets the US government bought and stockpiled a couple of years ago?

It's very simple; private citizens buy guns for self defense.
Governments only buy guns to coerce, intimidate, steal, round up, control and kill the citizenry.
I would suggest those that haven't bought a mil pattern rifle to do so.
The more of these that are possessed by the people, the less likely we're to succumb to the above plans.

When I was a young revenuer back in the late 70's, I ended up working a lot with Special Agents. These guys would always strap up just to go to lunch. (I'm not going to get into the fishing trips and hot rod runs; whoops, I meant surveillance.) I would tell them to knock it off because I was afraid they would drop a gun and shoot me. Don't laugh, agents doing stupid stuff was routine.

But when the dopers blew away a federal judge, that was a game changer. (Trivial Pursuit question: what actor's father shot the federal judge?)