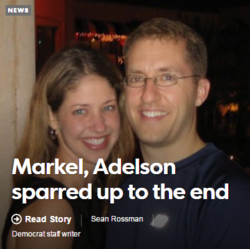 Tallahassee Democrat, Markel, Adelson Sparred Up to the End:

Florida State University law professor Dan Markel returned home from a September 2012 business trip to find his wife of six years, his two young boys and most of the couple’s possessions gone from his Betton Hills home.

While he was away, his then-wife and fellow FSU College of Law professor Wendi Adelson, moved out of the house, taking the toddlers with the help of her parents. Divorce paperwork dated Sept. 5, 2012, before Markel had left for his trip, sat on what used to be the couple’s shared bed. She left no address where she and the children were, court filings said. ...

Two years later, Tallahassee Police and FBI investigators point to the couple’s sparky divorce and her wealthy family’s eagerness to move the children to South Florida as the motive for the crime. In the arrest affidavit for 34-year-old Sigfredo Garcia, a North Miami man charged with first-degree murder in Markel’s death, details of the divorce are listed under the heading “Motive for Murder.”

Markel called his family’s exodus a “plundering” and “his worst nightmare,” in divorce filings. He likened it to infamous military attacks: “A Visigoth-like sacking of the marital home” part of a “Pearl Harbor style separation.”