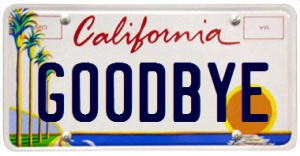 A growing number of Bay Area residents -- besieged by home prices, worsening traffic, high taxes and a generally more expensive cost of living -- believe life would be better just about anywhere else but here.

During the 12 months ending June 30, the number of people leaving California for another state exceeded by 61,100 the number who moved here from elsewhere in the U.S., according to state Finance Department statistics. The so-called "net outward migration" was the largest since 2011, when 63,300 more people fled California than entered. ... "California has seen negative outward migration to other states for 22 of the last 25 years."

A recent poll revealed that an unsettling sense of yearning has descended on people in the Bay Area: About one-third of those surveyed by the Bay Area Council say they would like to exit the nine-county region sometime soon. "They are tired of the expense of living here. They are tired of the state of California and the endless taxes here," said Scott McElfresh, a certified moving consultant. "People are getting soaked every time they turn around." ...

Some experts believe the boom in the Bay Area has exacerbated the problem of income inequality and the resentment that can accompany that economic reality. "There is a declining middle class in the Bay Area," said Christopher Hoene, executive director of the California Budget & Policy Center, a research group that recently completed a study about income inequality in Silicon Valley [Inequality and Economic Security in Silicon Valley]. ...

Well, I have lived in Cal. all my life. My budget for a new house is 750k......in Pasadena that gets me a small tear down in a decent neighborhood. In Reno Nv that gets me a 3,000 sq almost new house on one half acre or better.....with no state income tax. As soon as mom and dad cross the rainbow bridge......I am Nevada bound.

Wait, didn't the Washington Post just conclude that raising taxes caused California's GDP to grow faster? With the top 1% paying 48% of the income taxes, and poverty almost at 25%, Governor Brown calls that a victory of sorts...