Paul Ryan Unveils A Better Way To Do Tax Reform 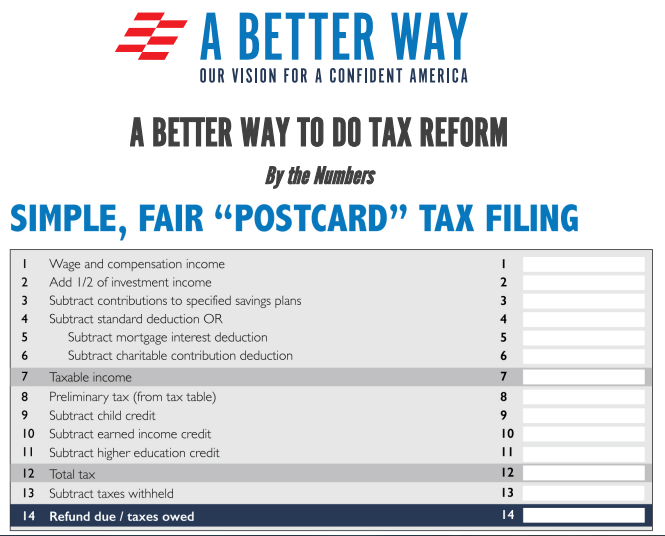 A Better Way for Tax Reform:

Our Principle
In a Confident America, the tax code and the IRS work for us, not against us.

Our Challenge
Our tax code is a mess, and that’s putting it lightly. Multiple brackets. High rates. Special interest breaks everywhere. Rules and regulations that are too complicated to understand. It costs more and more each year just to do your taxes, let alone pay them. All of this drags people down and leaves businesses buried in paperwork and compliance problems. So instead of promoting growth, our tax code is pushing jobs overseas. And the agency charged with overseeing all of this—the IRS—has repeatedly violated the trust of the American taxpayer.

Our Vision
We need a new tax code. It needs to be fair and simple for everyone. It should be so simple that most Americans can do their taxes on a form as simple as a postcard. Our tax code should be built for growth. It should help make the United States the best place in the world to hire and invest. And if we’re going to have a better tax code, we need a better IRS, one that puts the taxpayers first.

This blueprint offers a better way to dramatic reform—without increasing the deficit. It does so by promoting growth—of American jobs, wages, and ultimately the entire economy.

SIMPLICITY AND FAIRNESS
Our plan makes the tax code simpler, fairer, and flatter, so that it’s not only easier to do your taxes, but it’s also easier to have peace of mind at critical moments, whether it’s going to school, getting a job, raising a family, or planning for retirement.

JOBS AND GROWTH
Our plan will make it easier to create jobs, raise wages, and expand opportunity for all Americans.

A Better Way To Do Tax Reform:

Nice nitpicking in these comments. I guess you all think the current income tax structure is just fine, no room for improvement.

Messrs. Spradling & Petrik: That would be a novel interpretation of "compensation," which is generally defined as a reward for service, damage, or injury.

I agree, Dale. Income is either from labor or capital. Line 1 is intended to capture the former and Line 2 the latter.

Hey, PN - Don't ya think compensation includes Sch. C income? But, if it doesn't, I like this plan even better.

We are a Superpower and this makes a difference.

We are a Superpower and will always need to collect more in taxes than those low wage/taxation countries our corporations flee to. Who is he shifting the burden to?

Ryan didn't forget investors. Only half their income gets taxed. And savers get interest tax-free plus an incentive to save. So not much in here for the regular guy.

Mr. Phila: I hear you. Somehow these postcard guys always seem to forget about sole proprietors.

This is wonderful for me. I'm self employed and have no wages or compensation. I have business income. So, under Paul Ryan's plan, I won't pay any tax.

With all due respect, Ryan's personal history includes lying to Republican voters about what he promised to do, refusing to fight Obama and the Left on anything, and MORE than fully funding everything that Obama wanted for everything. This is just a lie to try to fool Republican voters into supporting those who have betrayed us yet again. After any putative election in November, if we had a Republican House, a Republican Senate, and a Republican President; Ryan would claim that he never heard of this plan.