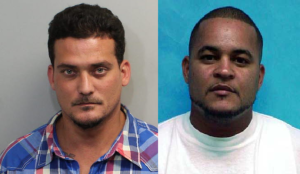 Garcia, 33, is in the Leon County Jail and 34-year-old Rivera is housed in a federal prison in Orlando.

State Attorney Willie Meggs said he would move to keep the grand jury as more arrests in the case are expected.

Daily Mail, Girlfriend Defends the Ex-Brother-in-Law of FSU Professor Shot Dead in his Driveway Who Cops Say Is Connected to Execution-Style ‘Murder-for-Hire’:

The wealthy Ft Lauderdale family police suspect of having a motive related to the execution-style killing of a highly respected Florida State University law professor had nothing to do with the murder, according to the live-in girlfriend of a family member.

The two suspected killers are Sigfredo Garcia, who has been arrested in connection to the murder, and Luis Rivera, who is already behind bars on other charges waiting to be served an arrest warrant.

Umchinda, 27, a Thailand-born credit union worker who started dating playboy periodontist Charles Adelson eight months ago, tells Daily Mail Online in an exclusive interview she doesn't believe the theory that Adelson or other family members paid the two to carry out the killing of Markel.

What's more, Tallahassee authorities say in the unsealed charging papers that Adelson’s' girlfriend at the time of the killing, Katherine Magbanua, had two children from a previous relationship with alleged Markel killer Garcia. Police claim Charles Adelson, 39, didn't like his brother-in-law.

'I can understand why the police would think this,' Umchinda said after reading a narrative of the police investigation while standing outside Adelson's canal house in Fort Lauderdale. 'But there's no way Charlie or anyone in the family is involved. They're all so nice.'

'I mean, he hasn't been saying anything about this. I haven't asked about it. But I know he's been under intense pressure over the last couple weeks and I assumed it was something having to do with work.

'I've gone to family dinners and they never talk about what happened to Wendi's ex-husband. I did ask once and Charlie said he was murdered. That was it.

'But I'm practically living with Charlie and I'm not worried. He's very nice and not violent at all.'

Through a payment transponder to travel Florida's Turnpike and cellphone records, police say they are sure Garcia and Rivera were in Tallahassee, and even in Betton Hills, on the day of the shooting.

What's more, a witness at a local motel reported to police he rented a room to the duo on the afternoon of July 17. They checked out early on July 18. So far, Garcia is denying ever going to Tallahassee.

Soon after the murder, the affidavit also shows, detectives started focusing on Markel's bitter divorce as a motive. ...

In their affidavit, investigators wrote they also focused on ties between Wendi's brother Charles and alleged murderer Garcia.

At the time of the shooting, Charles was dating the woman who had two children with Garcia. 'Charlie was involved in a personal relationship with Katherine Magbanua … Sigfredo Garcia is the father of Magbanua's two minor children, both with the last name Garcia,' the paperwork reads.

According to her neighbors in North Miami Beach, Magbanua left her rented townhouse with her kids in the middle of the night June 1, hours after Garcia was arrested. 'He (Garcia) was back with Katherine,' said one next door neighbor who asked that her name not be used. 'She hasn't been back here since he was arrested. 'Some friends of hers in pickup truck came a couple nights ago and cleaned out the house. She didn't tell anyone where she was going.' ...

'It's a very classy, well-educated family,' Umchinda tells us. 'Police must have it wrong.'

The danger is almost all politicians and CEOs are narcissists.

And you've had them all tested.

So, he's 39 years old, a partner in his father's practice, not notably disfigured, an unmarried bachelor, and seeking entertainment from a woman who's the baby mamma of a career criminal. Maybe he didn't care for Dan Markel because Markel said something about sex being a component of building a domestic life.

The older brother is a doctor who lives outside of Albany, N.Y. and is the sire of the other two grandchildren. His wife is East Indian. However, she's a doctor, not a gangbanger moll, so one might infer there are fewer interesting stories in her past.

I guess none of Harvey Adelson's children figured the endogamy thing worked out for them.

Florida can keep their "huddled masses, yearning to breathe free." and their "wretched refuse", too.

When I taught ethics (don't laugh), I would always point out the danger posed by narcissists and sociopaths. Because neither personality type has a conscious, they are extremely dangerous people. They are capable of doing things you and I cannot and never will understand. Our only defense is to lock them up.

BTW, what's the difference between a narcissistic and sociopath? A narcissistic has empathy skills (think Bill Clinton), while a sociopath has none (think Hillary Clinton). Of the two, narcissists are the most dangerous because they know when they have pushed too hard. Sociopaths always go a bridge too far.

The danger is almost all politicians and CEOs are narcissists.

Is Wendi still living with her family? If she is she's part of this.