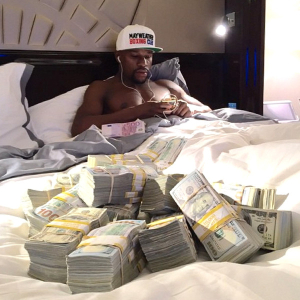 Floyd Mayweather Jr. made it rain so hard at a Las Vegas strip club a couple years back that he thinks he deserves a tax break for it.

Tax documents obtained by the Daily Mail show that Mayweather’s company, Mayweather Promotions LLC, has sent Larry Flint’s Hustler Club a 1099 IRS form for more than $20,000 he spent on strippers on May 25, 2014. Apparently The Money Team believes the Hustler Club is responsible for paying taxes on the $15,000 in singles and additional $5,000 cash Floyd and his crew spent that night.

Not surprisingly, club owner Jason Mohney is furious. He says the Hustler Club didn’t receive a dime of the $20,323.18 and that it all went to the dancers, who are independent contractors.

“I feel insulted, we throw him all this free stuff and he slaps me with a $20,000 tax bill, what the hell is that? Mayweather came to the club with a large group of friends, we gave them everything, comped bottles, comped seating, comped admission, they basically paid for nothing,” Mohney told the Daily Mail. ...

“If he wanted to 1099 somebody he should have gotten the names of all the entertainers he threw the money at,” Mohney added. “We’re not paying that’s for sure. If I had a $20,000 income the IRS will expect 40 percent, we’re talking around an $8,000 tab for money we never received.”

Mayweather’s tax attorney Jeff Morse told the Daily Mail that it’s possible the form was issued in error and that the situation would be rectified immediately if someone from the Hustler Club contacted Mayweather Promotions.

Floyd Mayweather Jr. is a wealthy world champion boxer, well known for being business savvy, apparently even at strip clubs. The boxer sent an IRS Form 1099 to a strip club to report that he dropped $20,000. The Daily Mail reports that Mayweather Promotions LLC sent the form to the Hustler Club for $20,000 spent on strippers. The money was mostly cash tips for dancers, so the club claims it didn’t see the money paid to the ‘independent contractors.’ Still, the club must report it.

More than a few observers are probably wondering how they too can start issuing IRS Forms 1099 to turn the tax tables on someone. Issuing a Form 1099 is something businesses do to verify that payment was made, and to help support tax deductions. Of course, by issuing a Form 1099, you are generally also sticking the recipient with paying taxes on the item. In that sense, some IRS Forms 1099 may conceivably be issued with a kind of punitive intent.

You used the language "made it rain so HARD" in the post. Was that pun intended?

Excellent idea. I am sending a 1099 to Sport Clips where I get my hair cut.