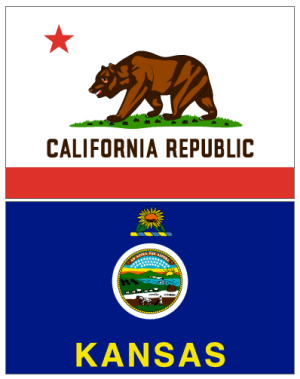 In 2012, voters in California approved a measure to raise taxes on millionaires, bringing their top state income tax rate to 13.3 percent, the highest in the nation. Conservative economists predicted calamity, or at least a big slowdown in growth. Also that year, the governor of Kansas signed a series of changes to the state's tax code, including reducing income and sales tax rates. Conservative economists predicted a boom.

Neither of those predictions came true. Not right away -- California grew just fine in the year the tax hikes took effect -- and especially not in the medium term, as new economic data showed this week.

Now, correlation does not, as they say, equal causation, and two examples are but a small sample. But the divergent experiences of California and Kansas run counter to a popular view, particularly among conservative economists, that tax cuts tend to supercharge growth and tax increases chill it.

California's economy grew by 4.1 percent in 2015, according to new numbers from the Bureau of Economic Analysis, tying it with Oregon for the fastest state growth of the year. That was up from 3.1 percent growth for the Golden State in 2014, which was near the top of the national pack.

The Kansas economy, on the other hand, grew 0.2 percent in 2015. That's down from 1.2 percent in 2014, and below neighboring states such as Nebraska (2.1 percent) and Missouri (1.2 percent). Kansas ended the year with two consecutive quarters of negative growth -- a shrinking economy. By a common definition of the term, the state entered 2016 in recession. ...

Few, if any, economists would say today that the recovery has been sufficient for all Californians. But almost no one can say that raising taxes on the rich killed that recovery. Or that given a choice of the two states' economic performances over the past few years, you'd rather be Kansas.

This essay makes three claims about the current state of tax law and academic tax scholarship in America: (1) the federal budget imbalance, caused by the failure of both political parties to raise the tax revenues needed to fund the nation’s spending priorities, is unsustainable and threatens our nation’s future; (2) tax scholars need to shift our focus from technocratic work to systemic solutions to the existential threat posed by this fiscal gap; and (3) California’s response to its seemingly intractable budget problems provides a template for resolving the federal budget stalemate in Washington, D.C.

Two years ago, both California and the nation were imperiled by long-term, structural, budget imbalances. California has reduced that peril by raising (already high) personal tax rates on the wealthy. The political success of that approach suggests that at the national level, Americans might be willing to support higher rates to maintain government services and move toward fiscal solvency.

The fiscal crisis highlights a problem with the dominant conception of legal tax scholarship. Under that conception, scholarship is (or should be) apolitical and confined to subjects about which the writer can demonstrate mastery. Unfortunately, the most pressing problem in the field is inescapably political and requires the scholar to address some issues about which no one can master. If we hew to a restrictive definition of scholarship, we limit our voice on a subject about which we have much to say.

Mr. Spradling: Nope, you don't wonder. I sort of figured you don't do much in the way of wondering.

AMT buff,
No doubt poorer immigration could affect the poverty rate, though I remember reading that net immigration largely stopped when the recession hit. Pew Research did some work on that.

What I do know is that in order to expand MediCal (California's version of Medicaid) and Covered California (the ACA exchange), a lot more people were reclassifed as "poor" in order to qualify for subsized health care. The local news reported that 50% of the state's children were considered poor, and I know that if you add in households that are close to the poverty line measure, the number goes up to 30-40%. This is self-inflicted, to a certain degree.

Saint Ronald the Great's 1981 tax cuts were followed by . . . the worst recession since Harding/Coolidge/Hoover.

The rate at which goods and services were being produced declined by about 2.5%. The contraction experience during the 1973-75 and 1957-58 recessions was more severe and that experienced during the 1953-54 recession about as bad.

The contraction running from July 1981 to November 1982 saw a 2.5% decline in the rate at which goods and services were being produced. The contractions during the 1973-75 recession and the 1957-58 recession were more severe and that during the 1953-54 recesssion was about as bad.

@PN, nope. I believe taxes are the tail not the dog. The only time tax policy makes a difference is when taxes force the wealthy to do stupid things.

Case in point is the 86 Reagan tax act. Before he cut the top rate to 28%, non-wage income was subject to a 70% tax. However, nobody, including rich Democrats, paid 70% because they invested in 3 to 1 real estate tax shelters.

But after the 86 act, the world was a different place. Trust me, I know this to be true because I was involved in the dirt bidness in the mid-80s. Forget the passive loss crap, there was no way the numbers worked with 28% write offs. The rest, the S&L crisis, the RTC, was history.

In other words, with a 28% top tax rate, the wealthy no longer had to do stupid things to avoid handing over their money.

Saint Ronald the Great's 1981 tax cuts were followed by . . . the worst recession since Harding/Coolidge/Hoover. Then Reagan raised taxes and, voila, the economy recovered quickly and strongly. In 1993, after Bill Clinton's tax increases--the ones the Republicans assured us would cause the economy to enter a non-recoverable tailspin--were followed by the most robust period of economic growth since . . . FDR (when tax rates hit 93%). In 2001, Bush 43's tax cuts were followed by . . . a recession. And in addition to Kansas, though not mentioned in the WaPo op-ed, we have the cases of Wisconsin and Louisiana, states with large tax cutting exercises by GOP-Arthur Laffer-Ayn Rand adherents–both with economies and state budgets on life support. Nothing more than anecdotal evidence, and sure Mr. Spradling, there were other events in the mix. (Massive Keynesian deficit spending by FDR and Reagan, dot.com boom for Clinton, among other things.) But doesn’t it kind of make you wonder?

MM, millions of very poor people moved to California from points south, from the poorest areas of Mexico and Central America. Of course the poverty rate increased. The big question is whether that poverty rate will persist 20 to 40 years from now even if the influx of poor people stops.

Dale hit this on the head. California's economy grew during the economic expansion of 2012 while the much smaller and different economy of Kansas didn't grow as much. I can't believe someone wrote an articke on this with a straight face.

Without disputing the GDP growth figure for California, it should be noted that similar tax increases on the wealthy at the federal level did not correlate with robust economic growth. The national economy, depending on how you measure real GDP, has averaged 2% or less since the recession officially ended.

The final paragraph in the article also bears scrutiny:

"Almost no one can say that... given a choice of the two states' economic performances over the past few years, you'd rather be Kansas."

The very large caveat that should've been mentioned is, "provided you can you can afford to live in California". For a self-described "wonk-blog", not a mention of poverty when discussing the overall comparative health of state economies is a glaring ommission, and ironic given the editorial bent of the Washington Post.

However, Califorinia's supplementary poverty measure, which takes into account cost of living as well as taxes and gov't assistance, is the *highest* in the country, at 23.8%, even higher the Washington, DC, which is second highest.

Therefore, if we are to suppose that raising taxes caused higher GDP growth, then at the same time one of Governor Brown's primary reasons for raising taxes, namely poverty reduction, has not been largely unsuccessful.

Kansas is an interesting place to visit. I had a nice time there. I visited Sumner Elementary School, the Eisenhower Library and the Pawnee excavation sites. It was hot though.

So nuthin' else happened, huh? There were no Facebook IPOs in Kansas, huh? The only variable that mattered was taxes, huh?

If you believe that, I have some climate change theory I want to sell you.