Anatomy Of The Hit On Dan Markel

Tallahassee Democrat, Anatomy of a Hit: 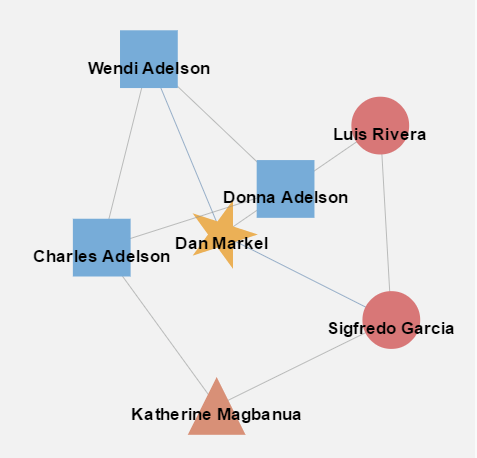 Above the Law, More Details From The Dan Markel Murder Investigation, Plus A Closer Look At The Adelson Family:

A second suspect in the killing — Luis Rivera, who allegedly carried out the killing with Sigfredo Garcia — is already in custody, on separate federal charges. ...

Chief DeLeo did say more arrests are likely. He declined to comment on the Adelsons, except to say with a smirk, when asked if he knew their whereabouts, “We aren’t on speaking terms.”

So let’s talk about the Adelsons. Based on the emails and texts we’ve received from readers, they are a subject of great public interest right now.

It’s important to note what law enforcement authorities do not allege about the Adelsons (at least at this point in the investigation). The affidavit claims that Charles Adelson “was involved in a personal relationship” around the time of the murder with one Katherine Magbanua, who happens to be the mother of the two children of Sigfredo Garcia, one of the alleged killers. The affidavit does not allege that Wendi Adelson knew about Dan Markel’s killing in advance or had any involvement in it (and in my story yesterday, I cited some evidence suggesting a lack of knowledge by Wendi). The affidavit also does not allege advance knowledge or involvement by Wendi and Charlie Adelson’s parents, Donna Sue Adelson and Dr. Harvey J. Adelson.

It is possible, of course, that members of the Adelson family in addition to Charlie Adelson had knowledge of or involvement with the alleged plot (or acquired knowledge at some point in the almost two years since Dan Markel’s death). But as of now, investigators do not make such allegations. ...

In terms of where they are now, Wendi joined Dan on the FSU faculty, but resigned from her post as a clinical professor in January 2015. As we mentioned yesterday, she was not eligible for tenure, so one can understand why she wanted to leave FSU and Tallahassee; there wasn’t much keeping her there after her divorce from Markel, finalized in 2013. She moved back to South Florida, where her parents and brother live, and currently clerks for Judge Adalberto Jordan of the Eleventh Circuit. ...

As for the other three Adelsons — Dr. Harvey Adelson, Donna Adelson, and Dr. Charlie Adelson — they continue to work at their South Florida dental practice, the Adelson Institute for Aesthetics and Implant Dentistry. The Institute’s elaborate website features video footage of the Doctors Adelson. ...

[Donna Adelson's] ... access to her grandchildren, the two sons of Wendi Adelson and Dan Markel, was going to be litigated at a hearing that was scheduled [and was] going to take place had Markel not been murdered; Markel claimed that Donna Adelson was saying negative things about him to her grandkids. ... The hearing had been continued, and no new date had been set when Markel was killed.

While [Chief] DeLeo wouldn’t go into detail, he did make clear that the fallout from the couple’s divorce, including Markel’s infighting with his estranged mother-in-law; the custody battle over the children and money, are summed up as “a motivating factor in this murder.”

Tallahassee Police didn’t want details of their case against a Miami man arrested in Dan Markel’s killing to be made public for fear other suspects in the murder-for-hire scheme might flee the U.S., court documents show.

“Suspected co-defendants have the financial means to flee the country and to not return, and in fact, have already been discovered talking about leaving,” TPD’s legal counsel Theresa Flury wrote in a May 26 motion that successfully sought to have Sigfredo Garcia’s arresting documents sealed. ...

Chiefly, the document appears to implicate family members of Markel’s ex-wife Wendi Adelson – her brother Charles Adelson and mother Donna Adelson – as being involved in the murder plot. Charles Adelson and his father run a cosmetic dentistry practice in Ft. Lauderdale, where his mother also works.

The case against Garcia and Rivera appears pretty strong. Having the Prius at the crime scene and having gps, cell, video, and eyewitness testimony linking them to the Prius tracking Markel is almost as good as having them confess. Plus any coconspirators r on the hook for everything.

The figure shows a link between Donna Adelson and Luis Rivera. What did I miss in the text of the report?

if you seriously think the wife didn't know, then I've got a bridge to sell ya . . .

"Children should be with paternal grandparents, aunts and uncles." Wholeheartedly agree but the maternal side views those boys as nothing more than their personal property, so the paternal side will be lucky if they ever see them.

Children should be with paternal grandparents, aunts and uncles.

wendi should raise her sons and be given the respect of a mother sheltering children from a hurricane of trauma. those boys had their fathers brilliance and their mothers empathy and I pray they are lucky to know wendi like all her students did as the inspirational intelligent woman she is. strong loving giving big hearted. 0 evidence to say she knew. be serious it defies evidence and common sense.

Dentists are a shady bunch, by and large. Never really trusted them, personally.

The scenario's more plausible than the notion that a mess of irritated bloggers pooled their resources and had him rubbed out.

The smart money says the young Markels will spend their formative years in Toronto (unless the law's an ass). This is just such a sorry mess.