NY Times:  A Noah’s Ark in Kentucky, Dinosaurs Included — But No Taxes 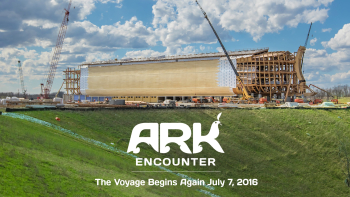 In the beginning, Ken Ham made the Creation Museum in northern Kentucky. And he saw that it was good at spreading his belief that the Bible is a book of history, the universe is only 6,000 years old, and evolution is wrong and is leading to our moral downfall.

And Mr. Ham said, let us build a gargantuan Noah’s ark only 45 minutes away to draw millions more visitors. And let it be constructed by Amish woodworkers, and financed with donations, junk bonds and tax rebates from the state of Kentucky. And let it hold an animatronic Noah and lifelike models of some of the creatures that came on board two-by-two, such as bears, short-necked giraffes — and juvenile Tyrannosaurus rexes.

And it was so.

Mr. Ham’s “Ark Encounter,” built at a cost of more than $102 million, is scheduled to open on July 7 in Williamstown, Ky. Mr. Ham and his crew have succeeded in erecting a colossal landmark and an ambitious promotional vehicle for their particular brand of Christian fundamentalism, known as “young earth” or “young universe” creationism.

But it was hardly smooth sailing. The state tried to revoke the tax rebates after learning that Mr. Ham would require employees to sign a “statement of faith” that would exclude people who were gay or did not accept his particular Christian creed. Mr. Ham went to court and in January, he won [Arc Encounter v. Parkinson, ___ F.Supp.3d ___, 2016 WL 310429 (E.D. KY 2016)]. ...

Young earth creationism gained currency only about 60 years ago, and has remained a marginal creed within Christianity. Even many Bible-believers and evangelicals accept the science showing that the universe is billions of years old — some reasoning that each of the six “days” of creation in the Book of Genesis may have lasted millions of years, not 24 hours. And of course, many Christians accept evolution.

But now the young earthers are having a heyday, thanks largely to Mr. Ham and his supporters. Their ministry, Answers in Genesis, produces books, magazines, videos and curriculums used by thousands of churches and home schoolers. The Creation Museum — which sells these materials in its gift shops — claims 2.7 million visitors have come in the nine years since it opened. But about half of those visitors came to the Creation Museum in the first three years, suggesting that interest may have dropped off. The ark could change that. Mr. Ham projects that the ark will attract 1.4 to 2.2 million visitors in the first year, and will double the attendance at the Creation Museum. ...

In an interview, Mr. Ham railed against atheist groups for trying to prevent his project from receiving tax incentives from the state of Kentucky. Answers in Genesis claimed that the state’s denial of those tax credits violated the group’s First Amendment rights. Judge Greg Van Tatenhove of the United States District Court for the Eastern District of Kentucky agreed, writing in his January decision that tourist attractions — even those that advance religion — meet the neutral criteria for the tax incentives.

To watch Mr. Ham debate Bill Nye was painful to watch. Bill was doing his best not to speak to him as though he is a child. Mr. Ham's responses came down to revealed truth that no one else can test or know, and the divinity of his English version of the bible.

I don't think we're going to make it as a species. At least not that much longer. Here is to hoping dolphins or some other species evolve to manage the earth is a more intelligent way.

The Bible, the greatest document ever written by a committee. Noah was actually a moron. Wasn't there at least one human being worthy of being saved from the flood? Even George Bush eventually sent the National Guard to New Orleans.

God, save us from your followers.