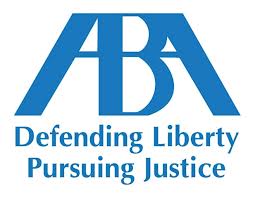 In recent months, we’ve seen signs of an emerging recovery in the legal education market. Newly released employment statistics for the Class 2015, however, won’t help build the case for optimism, according to a professor’s analysis.

At first blush, the latest numbers released by the American Bar Association on Monday suggest a positive trend: A larger percentage of new graduates of ABA-accredited schools are landing legal jobs as compared to last year’s figures. But that outcome is overshadowed by a more dispiriting national trend, according to legal education numbers guru Jerry Organ of the University of St. Thomas School of Law.

Over at Legal Whiteboard blog, Mr. Organ crunches the numbers and finds a sharp decline in the number of full-time legal jobs occupied by the Class of 2015. He writes:

For law schools, the new data comes at a time when they’re just starting to dig out of a historic slump in applicants. “It is discouraging news,” Mr. Organ told Law Blog.

The trend may not be entirely understood. But the employment numbers, he writes, could be seen as a “cautionary tale,” suggesting that the “good news on the applicant front may be somewhat short-lived.”

The ABA has just released employment statistics for the Class of 2015. As Jerry Organ speculated over the weekend, the report is decidedly mixed. The percentage of graduates holding full-time, long-term jobs requiring bar passage edged up slightly, from 59.9% in 2014 to 60.3% in 2015. 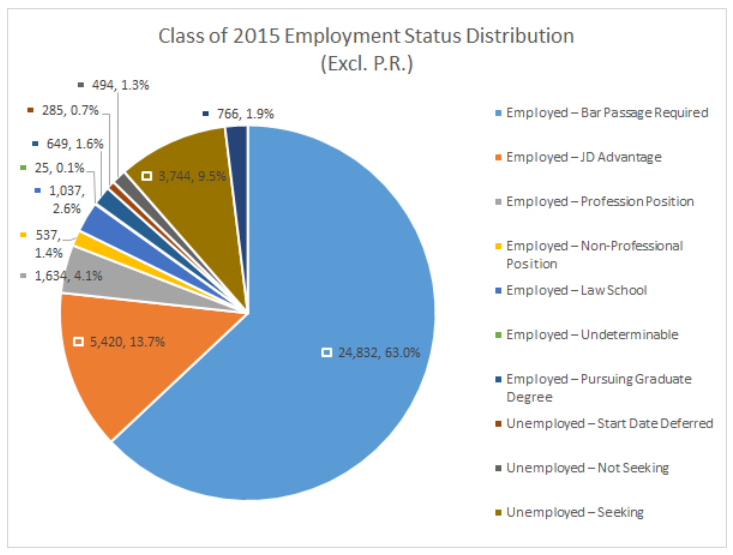 Pertinently, 59.9 percent of graduates held full-time jobs requiring bar passage, up only slightly from 58.7 percent for the class of 2014 and 55.9 percent for the class of 2013. (None of these figures include school-funded jobs.) The actual number of such jobs fell again to 23,600 from 25,344 last year. That’s a 6.9 percent decline. It’s troubling that demand for new full-time lawyers is falling with graduates. The phenomenon suggests that many graduates in past years were finding less stable work than the full-time/long-term category implies. Instead, fewer graduates aren’t translating to higher employment rates. I expected things to look better this year.

And now, what you crave: the year-over-year comparison table for each law school, sorted by their 2015 percentage of graduates in full-time bar-passage required jobs:

"I don't believe there has been a reduction in the demand for legal services."

"Legal services" is a broad term, but many respected industry folks believe that we've seen a structural shift in demand for the traditional legal services that comprise the bulk of economically remunerative legal work (i.e., paying clients and revenue generation that trickles down to an income sufficient to service the astronomical debt one incurs for the education, not to mention food and housing). Their belief is consistent with my experience here on the ground. Most newly minted attorneys simply cannot afford to work for free bridging the so called "justice gap."

A full 40% of the downsized class of 2015 did not find a full time long term job as a lawyer, even after nearly a year of graduating. That is awful.

It's not that employers are holding back filling open positions...As an attorney in a hiring position, I can tell you, the positions are not there to fill.

This is not a Baker's Square chocolate cream pie here.

JM, come to my "office" and I will show you that my work is down 80% since 2006. I have not recovered, not close. There is not enough legal work, clients, and fees to sustain a middle class income for attorneys who work hard and desire it. It is a cage fight among solos and small firms for fewer and fewer clients. I did something disgraceful the other day....to get a fee in the door some work to pay my Obama Care crappy Bronze level plan, I undercut another struggling solo to do a traffic matter for $150.

I don't believe there has been a reduction in the demand for legal services. I believe instead that there has been a reduction in the number of grads that employers deem "hirable" at any level. Think about what qualifications the 23,601 best law grad in 2015 would have. That is a median student at a law school outside the top 100, or a below median student at a school in the 80-100 range. Entering credentials are probably something like 3.2/153, and writing ability is probably bare minimum. Even an employer looking to hire is not going to hire this candidate. This is academic the profile of an insurance adjuster at best.

It is childish to assume that legal employers will just fill their open slots with whomever they can get. At a certain point, it is not worth hiring even if you have a need. The individual will just be a liability and create more work for the principals.

Looks like 40% of those that enrolled in 2012 may have been ill advised if their goal was to be a real lawyer within *10 months* of graduation. I hope mom and dad didn't turn that bedroom into an office or sewing room, little Johnny, Esq. is coming home to wait on that J.D. premium.

Because that "larger percentage" is only a result of a smaller graduating class. In absolute numbers, fewer law school grads found FT/LT/license-required jobs this year than last. Fewer than the Class of 2011, for that matter, which only had nine months before the count, as opposed to ten months this year. And even with that "higher percentage," well, it's still on the ragged border of F and D minus. Not really something to brag about. Particularly since the election may, depending on who gets the Oval Office and Congressional seats, may cap or repeal GradPLUS loans and repeal PSLF, PAYE, and REPAYE.

Anyone else remember this?

"By 2016, however, the per capita supply of law grads for entry-level jobs will be down by more than 25% from 2013 and more than 16% below America’s modern historic low in 2001. Unless something truly extraordinary has happened to non-cyclical demand, a degrees-awarded-per-capita analysis suggests that beginning in fall 2015 and intensifying into 2016 employers are likely to experience an undersupply of law grads."

How is it mixed news that a larger percentage of law school graduates are finding jobs? I suppose it's mixed if you want to increase the size of your law school class. But, for current law students/recent grads, it seems like only positive news.