WSJ:  Is Taxing Harvard, Yale And Stanford The Answer To Rising College Costs? 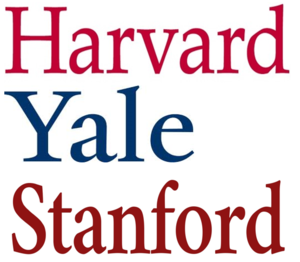 Lawmakers have a new solution for the high cost of college: Make the wealthiest universities pay for it.

Elite U.S. schools have grown richer since the 2008 financial crisis by investing their endowment money in everything from California vineyards to Chinese startups. State and federal policy makers now want to tax those profits—or force the wealthiest schools to spend down their endowments—to defray soaring student bills and refill depleted higher-education budgets.

“College costs have outpaced health-care inflation, and at the same time, there’s this benefit for endowments,” said Rep. Peter Roskam (R., Ill.), chairman of the House Ways and Means Subcommittee on Oversight, complaining in an interview about the funds’ tax-free status. “I don’t want to assert a conclusion, but let’s put this in the ‘I’m just saying’ category.”

Mr. Roskam and two other Republican congressional leaders have asked 56 private colleges with endowments of more than $1 billion—including Harvard University, Yale University and Stanford University—for detailed information about their holdings and policies for rewarding large donors with naming rights.

The lawmakers are looking for assurances that the schools are using their investment profits to help students and serve their nonprofit educational missions. The congressmen may propose taxes on endowment income or requirements that funds increase their earmarks for financial aid, a spokesman for Mr. Roskam said.

Rep. Tom Reed (R., N.Y.), who is also on the House Ways and Means committee, floated a plan late last year that would require endowments bigger than $1 billion to pay out a quarter of their earnings in grants to working-class families or face steep penalties or even the loss of their tax-exempt status. He is waiting for the committee to outline its next steps before introducing the bill, a spokeswoman said.

Behind the push is discontent over a growing gap between higher education’s haves and have-nots. About half of U.S. endowment wealth is held by two dozen schools enrolling 5% of the roughly 20 million students attending American colleges and universities, according to a Wall Street Journal analysis of National Association of College and University Business Officers and Commonfund data as well as federal data. 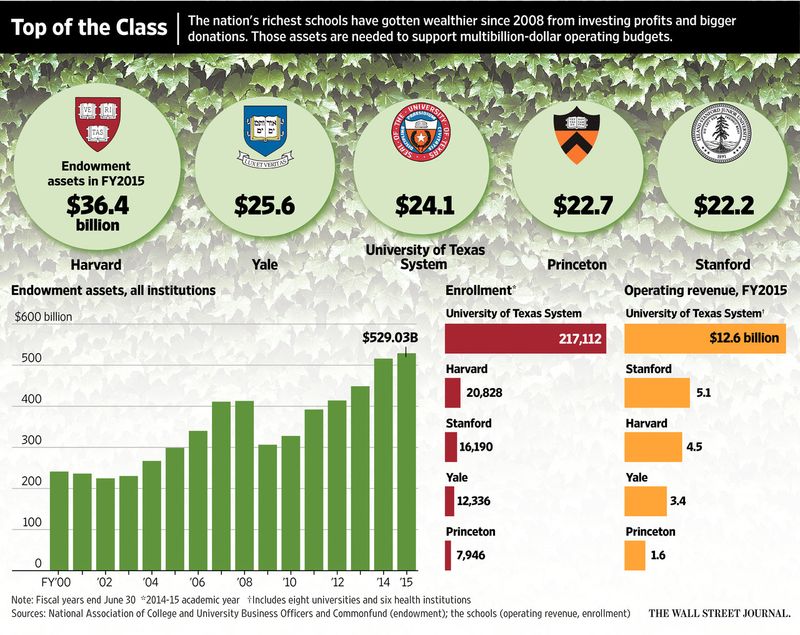 Meanwhile, published tuition and fees at four-year public schools nearly doubled over the last 15 years, while those at private, nonprofit schools rose 45%, according to the College Board, which tracks higher-education costs.

The efforts are long shots but show rising concerns about high tuition costs from both sides of the aisle. ...

Endowment largess has even drawn the wrath of Warren Buffett. The famed investor recalled last week how he served as a trustee at a school whose wealth ballooned from several million dollars to $1 billion. But Mr. Buffett “didn’t see the tuition come down,” he said. He didn’t name the school, but he was a trustee at Grinnell College from 1968 to 2011. A Grinnell spokeswoman said it has boosted financial aid and graduates leave “with the lowest average student indebtedness in the state of Iowa.” Grinnell has a $1.8 billion endowment.

The endowment-tax proposals are running into resistance from university officials who say students would lose scholarships, building projects would stall and school employees would lose their jobs.

Over the past decade, the nation’s 10 largest endowments have expanded 80% in size to $185.3 billion, according to The Wall Street Journal analysis. Harvard and Yale account for roughly one-third of that total.

A Congressional Research Service report from November said taxing endowment profits at 35% would lead to a revenue bump for the federal government of $16.2 billion, based on fiscal 2014 profits, which could then be funneled back into financial aid. Other moves like taxing charitable contributions and bond deals could add an additional $11 billion.

Just more socialism. How to get the wealthier more successful schools to subsidize the less wealthy less successful schools. Sigh. The goal should be to lower the cost of higher education, not redistribute it.

Not sure how taking money lowers costs. My Visa bill is huge because I spend too much, not because my boss refuses to give me a raise.

Rather than taxing the endowments they should simply limit deductibility. No deductions for donations to endowments with more than say $500 million in assets, and an absolute cap on the deduction that can be claimed period, say the lesser of $500,000 or 50% of AGI. And donations to affiliated family foundations are not deductible period.

There's a simple way to improve the quality of education, reduce out of pocket costs, and make taxpayers better off.

Take some of that $1 trillion per year we spend on the military and plow it into higher education. At $300 million, we'd still have the best funded military in the world, and since we are surrounded by the Atlantic, the Pacific, Canada and Mexico, we could probably get buy with one of the weakest militaries.

How about it Republicans? A little efficiency in public spending?

correction--at $300 billion we'd still have the best funded military in the world.