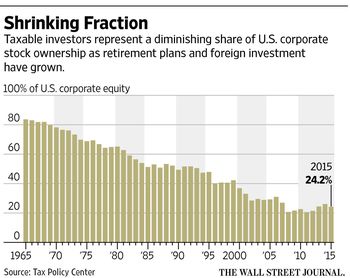 A new study showing that a shrinking fraction of shareholders of U.S. corporations pay taxes on dividends is bolstering a drive to revamp the corporate tax system. [Steven Rosenthal & Lydia Austin, The Dwindling Taxable Share of U.S. Corporate Stock, 151 Tax Notes 923 (May 16, 2016)]

The specter of double taxation, which animates complaints about today’s U.S. corporate tax code, is receding, according to a new study from the Tax Policy Center. Tax-exempt and tax-preferred entities—such as 401(k) plans and other retirement accounts—own more than 75% of U.S. corporate stock, nearly opposite the prevailing pattern from 50 years ago, the study said.

The study is emboldening Senate Finance Chairman Orrin Hatch (R., Utah), who says he is within weeks of releasing a proposal that would largely end the remaining double taxation of corporate dividends by shifting the burden from highly mobile corporations to less mobile shareholders.

Sen. Hatch’s plan would let companies deduct dividends, lowering their effective corporate tax rate as a backdoor way to reduce the U.S.’s world-high top statutory tax rate of 35%. Individual taxable shareholders’ dividends would be taxed as ordinary income instead of at lower capital-gains rates. Those taxes would be directly withheld by companies when they pay dividends to investors.

“It’s a huge mistake to locate the high tax at the corporate level and the low tax or the zero tax at the shareholder level,” Michael Graetz, a law professor at Columbia University, said at a congressional hearing this week. “We’ve got the tax in exactly the wrong place.” [Michael Graetz & Alvin Warren, Integration of Corporate and Shareholder Taxes, 69 Nat'l Tax J. ___ (2016).]

That feature may be a major political stumbling block for Mr. Hatch, whose plan will have trouble advancing in an election year under divided government. Any big change would disrupt businesses and shareholders that enjoy tax advantages now. Beyond that, a plan that lowers corporations’ effective tax rates and places the burden elsewhere will be hard to sell publicly.

“The politics of this are just unbelievably daunting,” said Peter Merrill, a principal in the national economics and statistics group at PwC.

The new Tax Policy Center study, from Steve Rosenthal and Lydia Austin, documents the growth of tax-advantaged investing. Just 24% of corporate stock is owned by taxable individuals, down from 84% in 1965. The remaining 76% includes tax-exempt investors such as endowments, mostly exempt foreign investors and retirement plans, which pay a second layer of tax at ordinary income-tax rates, but benefit from what can be decades of tax deferral.