Today the Treasury Department published the names of individuals who renounced their U.S. citizenship or terminated their long-term U.S. residency (“expatriated”) during the first quarter of 2016. 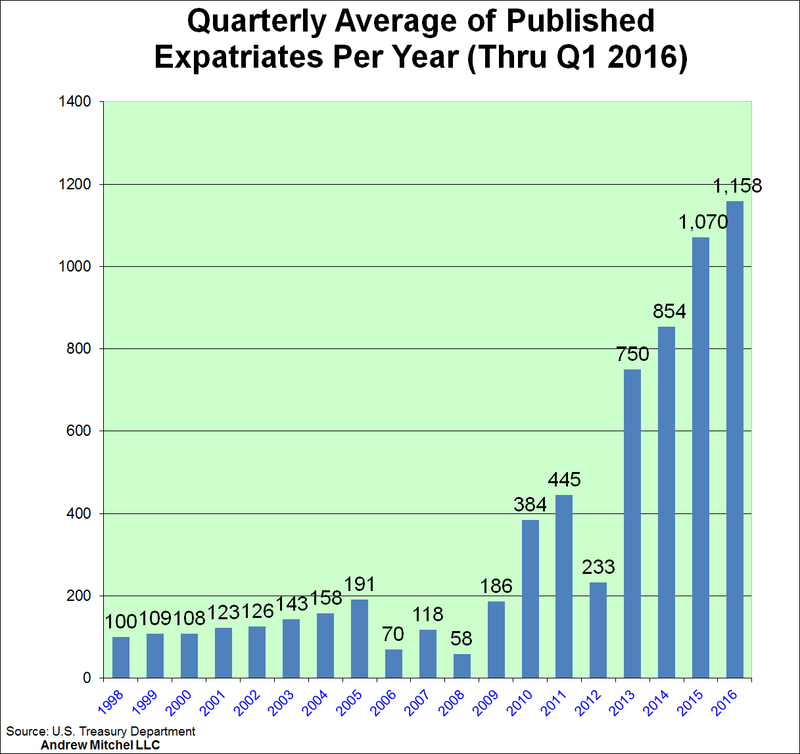 The data released today follows three consecutive years where new records were set for the number of expatriates.

Check me in this, but I believe that one has to also be granted permission to renounce his/her US citizenship by the US government.

TodundSteuer - There is also the renunciation tax which can be very high, Eduardo Saverin paid several hundred million to give up his U.S. citizenship.

OMG. A contributor (TodundSteuer) who actually knows what he/she is writing about. Instead of the usual right-wingerisms.

A US citizen who wishes to renounce must first physically leave the US. The oath of renunciation can only be administered by a US consular official outside the US and then only after the renunciant has paid a $2,350 fee for the privilege of shedding US citizenship. (Cheap, when you consider what the Soviets and East Germans used to charge – upwards of $100,000 a head - to ransom their citizens.)

Few of those who have renounced have only recently left the US. The vast majority are persons who have lived abroad for most of their adult lives and some who have never lived in the US at all.

Those with genuine emotional ties to the US or whose presence abroad is merely temporary are much less likely to abandon their US ties for financial reasons alone, regardless of the manifold imbecilities of Americans‘ duly elected representatives of whatever political stripe.

The only policy of the Obama administration that can be effectively linked to the increase in renunciations is the passage of the Foreign Account Tax Compliance Act of 2009 in March 2010.

Prior to the passage of that legislation US citizens with only slight emotional, familial, patriotic or financial ties to the United States nevertheless found it useful and/or expedient to hold their US citizenship „just in case“. These persons included, in particular, US citizens born abroad to US expatriate parents and US citizens who acquired their US citizenship by the „accident“ of having been born on US soil to foreign parents only temporarily in the US.

The passage of FATCAT, however, altered this equation drastically. The actual and potential financial cost, e.g. US income and social security taxes, US compliance costs, constant threat of extortion for compliance violations, threatened and actual termination of employment and local banking and other business and financial relationships due to US citizenship, etc. greatly diminished the real and potential value of a US passport.

Educate me please. How does one just renounce US citizenship? Is it a matter of driving to the INS and under the florescent lights among the filing cabinets, surrendering your Social Security card? Do you tell the wokers, "I renounce" my citizenship and then they hand you a plane ticket? Or if you are middle class, put you on a peanut boat to China? Do you get to choose the country? What if they send you to Russia or Nigeria?

Speaking as a U.S. expat looking at the insanity going on in the U.S. from Asia, I guarantee you this number is much lower than reality. I don't know what the Hell happened over there but it appears the whole country has just completely lost the plot. $20 million in debt, men using women's restrooms, and Hillary Clinton or Donald Trump as the next president. Maybe someone should check the water supply for hallucinogenic substances...

I assume there are data-collection issues that need to be explained. Still it leaves one wondering both about the country and why the mainstream media is so silent. The sharp increase matches perfectly with the Obama administration. Were Republicans in power, a story like this one would probably lead the evening news or multiple networks, with the anchors doing their best to appear grave and concerned.

I learned long ago that such people only care pushing their chosen narriatives. Anything that doesn't fit it doesn't qualify as news. For them, this isn't news.