The Estate Tax Is Destroying The Environment 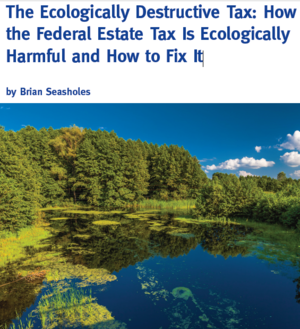 Brian Seasholes (Reason Foundation), The Ecologically Destructive Tax: How the Federal Estate Tax Is Ecologically Harmful and How to Fix It:

The ongoing debate over the federal estate tax tends to focus on the tax’s economic impacts, such as on small businesses, employment and capital formation, as well as the very small percentage it constitutes of federal tax receipts. Less well known, however, is the significant harm the estate tax does to the ecology of the United States.

Private lands, especially large, intact pieces of land, are critically important to ecological conservation. Conversely, land broken into smaller pieces is generally of less ecological value. Unfortunately, the estate tax results in private land being broken up, subdivided and sold. Over the past several decades it has become increasingly apparent that:

1. A combination of factors leads to land being subdivided, sold and converted to less ecologically beneficial uses: the estate tax’s high rate and relatively low exemption, the requirement to pay the tax within nine months of a landowners’ death, and the fact that many landowners are land-rich and cash- poor, which means their assets consist largely of illiquid land. These factors are exacerbated by the “age cliff” (the growing average age of U.S. farmers, ranchers and forest owners), other federal laws, and the oil and gas boom on private land.

2. Evidence of the estate tax’s negative ecological impact comes from the experiences of landowners, empirical studies and expert opinion.

3. Existing measures and proposed reforms designed to address the estate tax’s negative ecological impact have fallen short because: they leave the ecologically harmful tax largely intact; they are complex, time-consuming, difficult, expensive and unpopular with most landowners; and they are ineffective.

4. The best option for fixing the ecological harm caused by the estate tax is to eliminate the tax altogether because landowners, who are increasingly wary of government conservation programs, are key to conserving these largest and most ecologically significant pieces of land. When they are forced off the land by the tax, conservation suffers.

The longer the federal estate tax is in existence, the higher the tax’s negative ecological impact, as progressively more of the largest and most ecologically significant private landholdings are broken up, subdivided, sold off and developed to pay the tax. Once this happens, land is gone forever as high quality wildlife habitat and loses many of its other ecological values. Whether Congress and other policymakers will grasp the ecological harm caused by the estate tax remains to be seen.

Wow, runs contrary to the underlying premise of the estate tax as a tool to defeat what we once viewed as the British consolidation of properties laying fallow and unproductive. Not a huge "tree hugger," but it makes good sense as we watch large tracts being sold to satisfy estate tax obligations of beneficiaries while being added to urban sprawl.

I thought that the estate tax and the income tax were prime motives for the donation of huge tracts of undeveloped land to governments and for the creation of conservation easements on undeveloped land. These donations prevent the construction of much new housing adjacent to suburban areas, driving up the cost of nearby housing. They also limit the growth in the property tax base.

I guess it's the same old story: What's good for the environment is bad for the non-wealthy public and vice versa.

I call baloney. Off the top of my head, I can think of multiple large, very valuable properties in eastern Massachusetts that have managed to stay in the same family since before the Civil War. One of them, to the extent it can even be valued - there really are no benchmarks for it - is easily worth hundreds of millions of dollars; possibly even into the billions: the Elizabeth Islands off Martha's Vineyard, which were purchased by the Forbes family in the 1840's. Frankly, the number of >$5million or $10 million estates that are entirely land with no assets that hit the estate tax each year can probably be counted on one's fingers. This whole thing reeks of red herring. It also forces the notion that such estates can only be sold or subdivided by developers. That's weird, because at least here in Massachusetts, there are multiple organizations happy to take donated tracts of land. The Trustees of Reservations and the Massachusetts Audubon Society each manage tens of thousands of acres, and MA ain't that big a state. You can also donate land to become a town or state park, if you are so worried about your private land remaining unspoiled.

Using the threat of the estate tax to extort donations from private hands to public hands is a poor solution to a practice that probably destroys a lot of moderate size land holdings and forces them into the hands of developers (in order to get the closest to fair market value). The property tax does the same thing. Most land owners in this country are not cash-rich, and land does not typically produce a lot of cash flow in order to support itself as wildlife habitat.

A few anecdotal Massachusetts exceptions notwithstanding.

This whole op-ed is based on anecdotal, unproven assertions. Fortunately, fact checkers have debunked previous versions of this narrative. See https://www.washingtonpost.com/news/fact-checker/wp/2015/04/14/the-facts-about-the-estate-tax-and-farmers/, for instance.

“In 2013, the last year IRS data are available, only 660 decedents nationally reported owning any farm property,” [Iowa State professor Neil] Harl said. “However, the 100 decedents with estates valued at $20,000,000 or more had an average of $5,675,730 in farm property. I have been tracking this study for several years and the most striking feature is the increase in farm assets by the super wealthy. In my view, public policy is not served by eliminating the federal estate tax which is the force behind this push to argue that ordinary farmers, bona fide farmers, are likely to pay a huge amount of federal estate tax. It simply is not true.”

"[Anti-estate tax Senator] Thune’s staff conceded that they could not identify a single farm that had been sold because of the estate tax..."

Come to think of it, specifics are vastly lacking in this op-ed, too. Just ominous warnings of unproven consequences. Gosh, I wonder why that is...

The Estate Tax keeps families from becoming more powerful than they are. Protect the small rancher/farmer with an exemption number as high as you wish.

@UN What you are seeing in the IRS data are the uninformed who did not have enough money to hire people like me before granddad or grandma died. Case in point: As a friend of the family, I got called to explain death taxes to a family after granddad, at 91, stepped on a rainbow. (Son was 73.)

But, I could tell they didn’t believe me. The family could not believe their country (they had lost family members in every war) would take their land.

This conversation took place about 15 years ago. The 5,000 acres? A few years after my chat, the land was sold (presumably to pay the IRS). It now is full of suburban McMansions.

This is what you are missing in your data. Only the uninformed or those who don’t care what happens after they die pay the estate tax. For everybody else, it is voluntary.

"the uninformed or those who don’t care what happens after they die pay the estate tax. "

Yes, and the strawman this article presents is that this is not a vanishingly infinitesimal portion of the American populace. Probably about the same as the percentage of Americans who are classic car collectors who lack drivers' licenses or insurance and complain about government intrusion into their ability to enjoy that property. If this is the best the anti-estate tax set can do, it's pretty weak sauce. Incidentally, perhaps the most famous land-rich, cash-poor American of all time - Thomas Jefferson - was in favor of land rents, which were essentially proto-estate taxes. So was Adam Smith, for that matter.

@UN, your rebuttal was also anecdotal, so your criticism seems misplaced if not ill-conceived. What Dale describes is not atypical. Nor is it merely a question of estate taxes. You've missed the bigger picture.

And much of the old money wealth still producing trust fund babies today was placed in trusts before the advent of the generation-skipping tax in 1976.

We are talking about a very small fraction of one percent of Americans. Anecdotal is the word of the day.