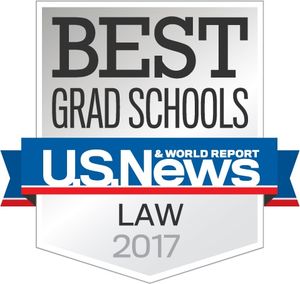 Jerry Organ has more thoughts here. He attributes some of the decline to changes in reporting requirements and definitions from the ABA.

The biggest declines in law school funded full-time, long-term, bar-passage-required jobs from 2014 to 2015 were:

Update:  Above the Law, Law Schools And The Cynicism Of Disappearing Jobs:

If there was ever compelling, albeit circumstantial, evidence that the practice was nothing more than a cynical attempt to game rankings rather than an earnest investment in the careers and education of their recent graduate this is it. ...

[T]he drop in school-funded jobs (though not as severe) should still be an eye-opener, especially when one notes that the number of full-time, long-term school-funded jobs requiring bar passage increased for the three years prior. It certainly looks like now that law schools don’t get credit for helping their recent graduates, they’ve decided lending that helping hand just isn’t worth it.

Each of these schools has a parking lot. They should establish a Used Car Dealership. It would raise badly needed revenue, teach young kids "people" and negotiation skills and give an entre into sales and financing laws. In turn, when these deals sour, due to sleaze ball tactics to MOVE IRON, a Chinese Wall could be set up and the Clinic could represent the aggrieved victims.

Those books are just going to have to re-shelve themselves. Pity.

Thanks for your snark as always. I have nothing confused.

Agree in full with Anon @3:01. Just as all not license-required jobs are created or paid equally (check out the NALP median salaries for Columbia and, say, Seton Hall, and you will find a >$100,000 delta between them), so it very likely is with JD-Advantage jobs. And just as with those license-required jobs, there is likely a heavy correlation between rank of law school and quality & pay of those JD-Advantage jobs. As always, sunlight is the best disinfectant.

You seem to have US News & World Reports, Pepperdine prof Derek Muller, and St. Thomas law professor Jerry Organ confused with Law School Transparency, which is neither the source of this article, the information presented in it, nor present thus far in the comments.

Another interesting data nugget to add to UNE's points regarding "advantage" jobs: their prevalence increases exponentially the further down the ranking hierarchy you go, which is curious...Also, many of the schools with the highest percentage of these lower paying "advantage" jobs also sit atop the average student indebtedness list... All of this begs the question whether many of the "advantage" jobs are intentional, desirable positions for newly minted (debt shackled) lawyers.

I'm certain that many JD advantage jobs are good, desirable ones, but I worry that a substantial portion of them are not. There needs to be detailed data and transparency on these positions so that prospective students can evaluate their potential outcomes appropriately. If it happens that they are good, desirable jobs, that is great news for law schools and prospective students alike.

Waiting for "Law School Transparency" and its most vocal supporters to attack the integrity of these schools for how their rankings-gaming via law school funded jobs distorts information/hides the ball/prevents full disclosure and informed consent for incoming students.

Oh, wait, I forgot: they only write lengthy reports and go on a media blitz against law schools when they're "bottom-feeder" schools that aren't ranked highly by US News:

(I neither teach at an Ivy nor at a low-ranked school, so my only horse in the race is: the value of transparency should not depend upon the perceived prestige of the school at issue).

"Except, if the data did not reveal what UNE suspects (i.e., wants) them to reveal, then they would be ipso facto false, because they contradict his *idee fixe*. "

I but take my cue from law professors who steadfastly claim that the last eight years' worth of law school grad employment and salary data don't count because reasons. Or that the median starting salary for college grads is $30k, even though it is actually nearly $50k. Or that there was going to be a law school graduate shortage these year. Or that emotional state is an immutable genetic construct like height. Or any of the other whoppers that have been passed through articles and comments on this site recently. Nevertheless, you are free to prove me wrong by posting a full list of the JD Advantage jobs from your law school, along with the attendant wage premiums they received over the BA/BS holders in those same jobs. I'll wait.

"One highly suspects that weeding through the data would reveal" [...]

Except, if the data did not reveal what UNE suspects (i.e., wants) them to reveal, then they would be ipso facto false, because they contradict his *idee fixe*.

I hope that this is eye opening the Kool Aid drinkers on the law school faculties. Schools care about students, and student employment, only to the extent that it hurts future sales. That is all.

One highly suspects that weeding through the data would reveal that at least as high a percentage of JD-Advantage jobs are neither truly JD-advantage nor bestow any earnings premium for a JD in the job versus a BA in the same job. For example, this would include many, many compliance jobs.

wow, we are so principled!

These sham "jobs" should have been given no weight all along, they were always a farce. They were yet the latest scheme by the law schools to cheat. These "jobs" undermine the integrity of U.S. News' product. Give them no weight going forward (if there are any left)...