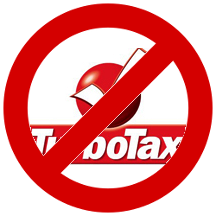 It's tax season again, and that means you're probably thinking about using TurboTax. You wouldn't be alone; Intuit, the company that sells TurboTax, claims the app has 31 million users. Its competitors did pretty well for themselves too, with H&R Block preparing more than 20 million returns last cycle and millions more using TaxAct and TaxSlayer.

Let me be blunt: You should not pay for TurboTax. If you want to use a free version of TurboTax or H&R Block at Home or TaxAct, go nuts. But for the love of God, don't give Intuit money

TurboTax is an evil, parasitic product that exists entirely because taxes are confusing and hard to file. Worse than that, Intuit is one of the loudest voices on Capitol Hill arguing against measures that make it easier to pay taxes. The Obama administration has argued for automatic tax filing, in which the IRS uses income information it already has to fill out your tax return for you. That would save millions of Americans considerable time and energy every year, but the idea has gone nowhere. The main reason? Lobbying from Intuit and H&R Block.

Don't give Intuit money. Don't give H&R Block money. To do so is to perpetuate the status quo in which you have to file your own taxes in the first place. The best way to escape this trap is for millions of taxpayers to start doing their own taxes in hopes of weakening Intuit and H&R Block and depriving them of money they could use to lobby against auto-filing. This requires privileging your own long-term interests ahead of your short-term ones; it's mildly annoying to do your taxes by hand for now, but in the long run, if the plan works, you won't have to do your own taxes at all. ...

Countries like Denmark, Sweden, Estonia, Chile, and Spain already offer "pre-populated returns" to their citizens. The United Kingdom, Germany, and Japan have exact enough tax withholding procedures that most people don't have to file income tax returns at all, whether pre-populated or not. California has a voluntary return-free filing program called ReadyReturn for its income taxes. ... The Obama administration supports return-free filing, and Ronald Reagan touted the idea in a 1985 speech. ...

So why hasn't return-free filing happened yet? The short answer is lobbying, and in particular lobbying by companies like Intuit. In 2013, ProPublica's Liz Day wrote an incredible exposé on just how hard Intuit has lobbied to stop return-free filing from becoming a reality. ...

So what's a regular person hoping for return-free filing to do? Well, you could do what Joseph Bankman, the Stanford Law professor who helped design California's system, did and spend $30,000 out of pocket to hire a lobbyist to push the idea and counter Intuit's lobbying.

But for those of us without $30k to spare for the greater good, there's a less demanding option: Stop paying for TurboTax. ...

After years of using the paid version of TurboTax, I did my own taxes using Free File Fillable Forms for the first time last month. Yes, it was a bit annoying. But even though I itemize my deductions it only took a couple of hours, not much longer than TurboTax would. It's absolutely worth it.

If you have yet to file, don't pay TurboTax a cent. If enough of us get on board, we might finally get to enjoy the return-free world we deserve.

Letting the government do its citizens’ taxes is cheap, efficient, and accurate. Naturally, the United States won’t do it.

[T]he excruciating pain of tax season is just another example of negative American exceptionalism. In fact, about one-half of American taxpayers earn all their income from one employer’s wages (which the IRS can see) and interest from one bank (which the IRS can find out without much effort). The IRS could easily send tens of millions of individuals their nearly completed taxes by mail—or even, by text.

“Rather than some crazy, wild idea that’s never been tried before, this is doable and a lot of countries do it,” said William Gale, a tax expert at the Brookings Institution. Eight OECD countries, including Finland and Norway, fully prepare returns for the majority of its taxpayers. In Estonia, it famously takes the average person five minutes to file taxes. ...

Several years ago, the White House estimated that American taxpayers spend 7.6 billion hours and $140 billion a year figuring out what they owe the government and paying people to help them owe less. Those who want to play the game—and have the money to do so every year—are welcome to continue. The rest of the country deserves a 21st-century approach to taxes.

this is absolutely backwards. Paying Intuit is what REMINDS YOU that the government is stealing your money. Following the advice of this column is akin to accepting tax withholding, it perverts your perception to the point where many people view the refund as a "gift", rather than a partial return of the money the government has borrowed, tax free, all year.
Giving the IRS even more power is NOT the answer!

If you really want to get rid of dark money, lobbyists and special interests, and tax returns, get rid of the income tax and replace it a consumption tax. When you buy something you pay a tax. See HR 25, the FAIRtax.

ReadyReturn, and other pre-populated forms, are a high risk for taxpayers without the resources (time, skill, money) to double check the work of a stranger and to find the inevitable errors. For a discussion of the problems with this theoretical concept, and the reasons ReadyReturn did not live up to its hype, see http://mauledagain.blogspot.com/2012_07_01_archive.html#9050839896037375192. For a more recent example of why the risk is real, see http://mauledagain.blogspot.com/2015_05_01_archive.html#137954122311589722 (Surely This Does Not Boost Confidence In The ReadyReturn Proposal). To simplify the federal income tax, remove lobbyists, dark money, and special interest groups from the tax-law-writing process.

This former IRS employee appreciates Turbo Tax. There's no way the IRS will come up with something as pretty or easy as Turbo Tax (just take a look at IDRS).

Go to a private, independent CPA. Even though I am lower middle class, my returns look like Donald Trumps' and Mitt Romneys' . My CPA preforms magic.....He tells me to bring my receipts to him, my 1099's and poof, BIG REFUND. I am a very very very very very micro mini version of the 1 percenters.