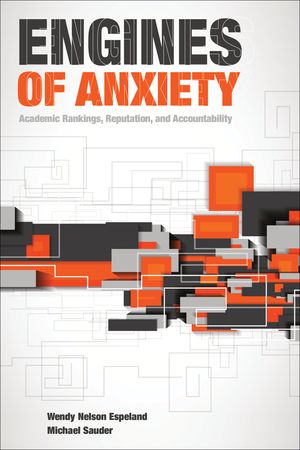 Students and the public routinely consult various published college rankings to assess the quality of colleges and universities and easily compare different schools. However, many institutions have responded to the rankings in ways that benefit neither the schools nor their students. In Engines of Anxiety, sociologists Wendy Espeland and Michael Sauder delve deep into the mechanisms of law school rankings, which have become a top priority within legal education. Based on a wealth of observational data and over 200 in-depth interviews with law students, university deans, and other administrators, they show how the scramble for high rankings has affected the missions and practices of many law schools.

Engines of Anxiety tracks how rankings, such as those published annually by the U.S. News & World Report, permeate every aspect of legal education, beginning with the admissions process. The authors find that prospective law students not only rely heavily on such rankings to evaluate school quality, but also internalize rankings as expressions of their own abilities and flaws. For example, they often view rejections from “first-tier” schools as a sign of personal failure. The rankings also affect the decisions of admissions officers, who try to balance admitting diverse classes with preserving the school’s ranking, which is dependent on factors such as the median LSAT score of the entering class. Espeland and Sauder find that law schools face pressure to admit applicants with high test scores over lower-scoring candidates who possess other favorable credentials.

Engines of Anxiety also reveals how rankings have influenced law schools’ career service departments. Because graduates’ job placements play a major role in the rankings, many institutions have shifted their career-services resources toward tracking placements, and away from counseling and network-building. In turn, law firms regularly use school rankings to recruit and screen job candidates, perpetuating a cycle in which highly ranked schools enjoy increasing prestige. As a result, the rankings create and reinforce a rigid hierarchy that penalizes lower-tier schools that do not conform to the restrictive standards used in the rankings. The authors show that as law schools compete to improve their rankings, their programs become more homogenized and less accessible to non-traditional students.

The ranking system is considered a valuable resource for learning about more than 200 law schools. Yet, Engines of Anxiety shows that the drive to increase a school’s rankings has negative consequences for students, educators, and administrators and has implications for all educational programs that are quantified in similar ways.

Inside Higher Ed, 'Engines of Anxiety':

The book provides example after example of how the law school rankings of U.S. News & World Report lead admissions officers, law deans and university presidents to obsess about the pecking order and standardized test scores, which are seen as the speediest way to move up in the rankings. ...

The authors of the book are two sociology professors: Wendy Nelson Espeland of Northwestern University and Michael Sauder of the University of Iowa. In interviews, both said that, as sociologists, they were attracted to the topic because of their interest in the quantification of quality, the use of numbers to create status and the anxiety of professionals over how they are evaluated.

In their research, they heard a lot of bashing of U.S. News rankings. Admissions deans said the rankings were “evil,” or they just exclaimed, “Hate them.” One admissions dean at a top law school called U.S. News, based on its rankings, “a half-assed, shitty magazine.” These same law school officials, however, described how they do whatever is necessary to do well in the rankings. ...

In interviews with law school admissions directors and faculty members who serve on admissions committees, the authors found an overwhelming focus on Law School Admission Test scores -- above everything else and sometimes regardless of other indications of whether an applicant would be a good or bad law student or lawyer. ...

The point about this being a policy that is not public is common among law schools in the book. Generally, no law school admits to an emphasis on the LSAT along the lines that admissions deans (and law school deans) freely admit to in the book. (In many ways, the findings of the book mirror those of Julie Posselt’s Inside Graduate Admissions, published in January by Harvard University Press, which noted that way Ph.D. admissions committees at top graduate programs focus on the GRE far more than they admit to in public.)

But admissions directors told the authors that largest way the LSAT emphasis hurts black and Latino applicants is that law school officials fear they are judged by LSAT averages -- not just in the U.S. News points awarded for test scores, but in the general reputation of a law school. ...

The pressure on doing well in the rankings, the book says, quoting deans and others, isn’t just a matter of law school deans putting pressure on admissions directors. Deans report a trickle-down impact in which university presidents pressure them, in part by citing trustee and alumni pressure they receive. ...

Still, the authors said, there could be ways that the law school rankings, and other rankings, might be improved.

Espeland said in an interview that she thought one of the biggest problems with rankings was the use of ordinal numbers to suggest a precision that doesn’t exist at all. This misleads prospective students and also creates more pressure on law school officials, she said.

The greatest pressure she saw in the interviews was at law schools that could be either 49th or 51st in U.S. News and were scrambling to do whatever they could to get the former rating instead of the latter -- even if the measures had nothing to do with actual quality. There is a sense that being in the top 25, or top 50, matters a lot. And the ordinal rankings convey a false sense that the 49th-best law school (per a ranking) is actually better than the 51st, she said.

Sauder suggested several ways to improve rankings. One would be to divide law schools by mission. Currently, he said, a law school that saw diversifying the law profession or producing more lawyers who would be engaged in helping low-income people likely would be ranked low, as such a mission would be advanced by looking beyond LSAT scores. Such institutions might be better compared to one another, he said.

Further, Sauder said, rankings would be better if they had competition. He has done other projects studying business school rankings, and while he found many of the same problems, the existence of multiple rankings appears to relieve the pressure to conform to the standard of any one of them, he said.

Still, Sauder doesn’t hold out much hope for reform. He hopes drawing attention to the impact of rankings may make educators more reflective about them, but he doesn’t expect them to disappear. “Rankings are here to stay,” he said.

USN&WR is a third rate weekly news magazine behind Time and Newsweek. They somehow had to rebrand themselves to gin up a market. This is a magazine that scummy door to door peddlers sold riding around in old Ford vans. This is a magazine from the Publishers Clearing House ilk that bilks lonely, elderly dementia patients. This is a magazine that one reads while pooping for 10 minutes then tossing into the recycling bin. They figured all of this out and so came up with this pseudo academic ratings gig. Its all bullshit to sell magazines.