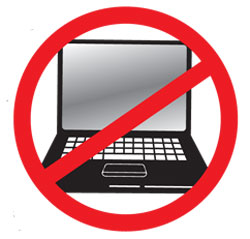 Following up on my previous post, Princeton/UCLA Study: It Is Time To Ban Laptops In Law School Classrooms:  Wall Street Journal, Can Handwriting Make You Smarter?:

Laptops and organizer apps make pen and paper seem antique, but handwriting appears to focus classroom attention and boost learning in a way that typing notes on a keyboard does not, new studies suggest.

Students who took handwritten notes generally outperformed students who typed their notes via computer, researchers at Princeton University and the University of California at Los Angeles found. Compared with those who type their notes, people who write them out in longhand appear to learn better, retain information longer, and more readily grasp new ideas, according to experiments by other researchers who also compared note-taking techniques.

“The written notes capture my thinking better than typing,” said educational psychologist Kenneth Kiewra at the University of Nebraska in Lincoln, who studies differences in how we take notes and organize information. ...

[V]irtually all college students have portable computers; lectures are the main vehicle for instruction; and the keyboard clatter of note-taking is the soundtrack of higher education.

Generally, people who take class notes on a laptop do take more notes and can more easily keep up with the pace of a lecture than people scribbling with a pen or pencil, researchers have found. College students typically type lecture notes at a rate of about 33 words a minute. People trying to write it down manage about 22 words a minute.

In the short run, it pays off. Researchers at Washington University in St. Louis in 2012 found that laptop note-takers tested immediately after a class could recall more of a lecture and performed slightly better than their pen-pushing classmates when tested on facts presented in class.

Any advantage, though, is temporary. After just 24 hours, the computer note takers typically forgot material they’ve transcribed, several studies said. Nor were their copious notes much help in refreshing their memory because they were so superficial.

In contrast, those who took notes by hand could remember the lecture material longer and had a better grip on concepts presented in class, even a week later. The process of taking them down encoded the information more deeply in memory, experts said. Longhand notes also were better for review because they’re more organized. ...

I asked my law professors if I could record their lectures, so that I could re-listen and really absorb the material. Many said no because they value their intellectual property rights above my learning. I had no intent to copy or distribute the recordings and even promised to destroy them after I was through. Many of the same professors required the purchase of their own textbooks. I will always remember the professors who placed their personal financial profit above the quality of my legal education. By the way, how are the ad sales coming along, Tax Prof?

Written note taking can be made even better by following certain handy techiques. Google "note taking" will give links to some quite helpful advice about doing it better.

My own take is that there's only one area where digtal gadgetry can help. Students taking certain highly verbal courses, i.e. history, literature and law, might benefit from recording their classes and listening to it later, perhaps when showering or walking across campus.

That's less likely to be true in STEM courses. I majored in engineering and most of the material in my classes was math written very quickly on blackboards. Recording isn't much help there. STEM students might want to take, before or in parallel to their regular courses, online classes from MIT or the Khan Academy. Seeing the same material from different angles will aid learning.

Gee, I wonder what the results would be if students LISTENED and then later THOUGHT about what they had just heard.

Silly me. I'm surprised someone hasn't come up with a "You don't need to go to class" app.