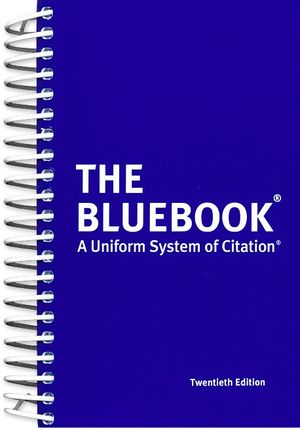 The Volokh Conspiracy:  Judge Richard Posner Explains Why We Should “Burn All Copies of the Bluebook”, by Ilya Somin (George Mason):

In a recent article in the ABA Journal, Judge Richard Posner – who is probably the nation’s most influential federal judge outside the Supreme Court – is quoted as saying that we should “burn all copies of the Bluebook,” the standard system of legal citation produced by a consortium of leading law reviews. ...

In general, I am strongly opposed to book burning of any kind. But in this case, I can only say, burn, baby, burn! Like Posner, I have long argued that the Bluebook and its hundreds of pages of useless, time-wasting rules should be abolished and replaced with a much simpler citation system, perhaps similar to those used in other academic fields. It would save lawyers, legal scholars, and law students enormous amounts of time and effort.

Judge Posner laid out his critique of the Bluebook in greater detail in this Yale Law Journal article. In my view, however, he was a little too generous to the Bluebook when he compared it to the pyramids of ancient Egypt. ...

On a somewhat more serious note, Judge Posner has shared with me a copy of the simplified citation system that he and his clerks use in drafting opinions, and has authorized me to post it online. I have done so here; it is actually a little over five pages. I may not agree with every one of Judge Posner’s rules. But his approach is a vast improvement over the Bluebook. It simplifies without losing any of the information a reader needs to know to figure out what source is being cited.

Yes - the Blue Book is way too long to be of practical use. Like the law review articles whose citation it rigorously informs, the Bluebook's audience is mainly just academics and law review staffers. As a practitioner, I dislike it intensely. Too long, too pedantic, and as Judge Posner points out, based on the economic model of planned obsolescence so you have keep rebuying it every few years.

I would like to see some competition in the Legal Citation Rulebook business. How about some of us practitioners putting together a concise guide (50-100 pages) specifically for American lawyers who work in American jurisdictions? We can omit 99% of the foreign material by adopting the excellent rule Victor Thuronyi suggested in the above comment. We also can leave out other material of interest only to academics and law review staffers, and pare down the rest until we have the clear, concise guide that practitioners as well as courts would be quite relieved to see and adopt.

I would add one rule to Posner's, which covers citation of foreign law:
"When citing legal materials from a jurisdiction outside the United States, follow a citation format that is commonly used in the jurisdiction in question."

When a federal judge suggests any book be burned, even if said in jest, it is time to remove him/her from the bench. Life tenure is a mistake.

On this issue, I agree with him. No once during 26 years of representing three bill retail thefts has a judge ever criticized my citation ability. Now, as to law and economics and subjecting liability to cost-benefit analysis, I disagree. It's called justice for a reason.