As gay marriage and other cultural changes sweep the nation, the most devout law schools seek to hold onto their core beliefs.

We compiled a ranking based on the following: percentage and activity of students who belong to the faith; percentage and activity of faculty who belong to the faith; number of religion-focused courses and other ways the school incorporates the faith into the curricula; religion-based journals, centers and clinics; religious services and clergy at the law school; mission of the law school. 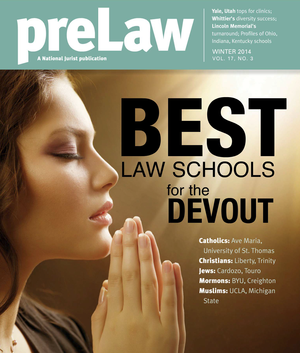 Since the Jews are the "Chosen," there is really no distinction between most and best. My Rabbi during the 70s had a bumper sticker on his Matador that read, "We never lost it." That was in response to the ubiquitous bumper stickers that read "I found it."

For adherents of the People's Temple, Cooley Law School.

Does this mean "the best Jews" or "the most Jews?" It's not the same.