The Legal Whiteboard:  Updated Analysis of Attrition through the 2014-15 Academic Year, by Jerry Organ (St. Thomas):

In a nutshell, overall first-year attrition has increased each of the last four years, going from 5.81% to 7.04% over that period. This overall increase, however, results largely from increases in overall attrition among schools with median LSATs less than 150, as the overall attrition rates for law schools with medians LSATs of 150 or greater have generally decreased over this period. “Academic attrition” rates increase significantly as median LSAT decreases, while “other attrition” presents more of a mixed record. 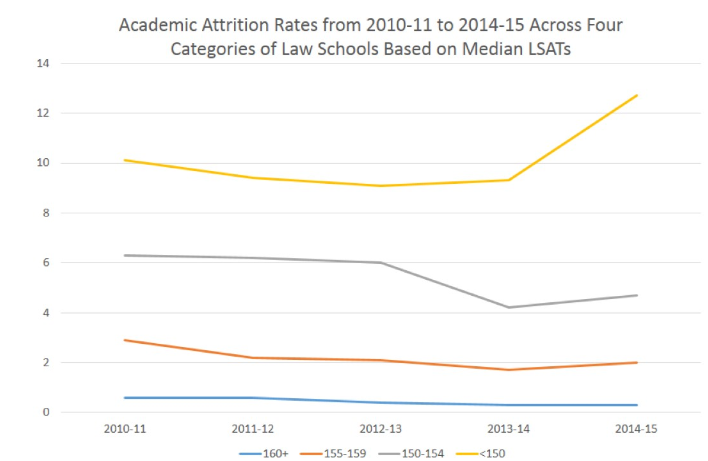 We also do not know for sure who is experiencing attrition within a given law school. The data presented here would suggest that students on the lower end of the distribution of a law school’s entering class profile are more likely to experience academic attrition than students on the higher end of the distribution, but presently that is not easily verified.

Way back when I first considered going to law school, I took Property I at night from the University of Houston Law school (go Coogs!). When I found that the study of law was logical and understandable, I surveyed the schools available in DC. Georgetown was a bit cheaper ($11 per credit hour, as I recall) so I made my application and accepted a job at the Patent Office to provide the needed funds. By the time I graduated (Yay! #2 in my class) the cost had risen to an abominable $19. But that was back in 1960. Think of the kids nowadays who would jump at the chance to matriculate at $19 per hour!

Something has to give.

Hmmm...Increased academic attrition rates at the bottom feeder schools who have correspondingly decreased admissions standards near open enrollment, who coincidentally have the poorest and declining bar pass rates, who have high tuition, but offer the least aid (i.e., highest average debt if one does manage to graduate). These are also the very same schools that defend their newly decreased admissions standards by arguing that they are saviors who provide opportunities to underrepresented group in the law? Intentionally flunking out increasing rates of students as you let in more that you know full well are less likely to succeed strikes me a predatory and distasteful.