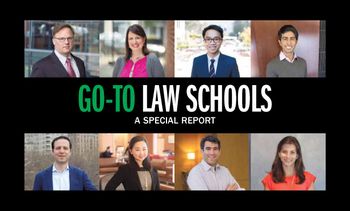 New associate hiring held steady in 2015 after three years of growth, with the country’s largest 100 law firms bringing on 3,412 new law school graduates. Among the 50 law schools most popular with those employers, 23 percent of last year’s graduates landed associate jobs—the same percentage as the previous year.

We’ve ranked the top 50 law schools by percentage of 2015 juris doctors who took associate jobs at the largest 100 firms. The selection of those 100 law firms was based on lawyer count—as identified on the NLJ 350, The National Law Journal’s annual survey of the nation’s largest law firms. We also examined tuition at the schools that produced the most Big Law associates, and we ranked the schools with the most alumni promoted to partner in 2015.

The Top 50 Go-To Law Schools:  These schools sent the highest percentage of new graduates to the largest 100 law firms:

Do Harvard and Yale send a larger % of their graduates to judicial clerkships, often multiple clerkships per graduate? That would account for a smaller percentage placed directly in law firms.

Interesting. It would however be more interesting if it included about 140 law firms, as there are about 40 firms additional firms that pay top dollar outside of the top 100 firms, mostly located in cities like Tampa, St. Louis, New Orleans, etc. Also, this would be more difficult to include, but it would be interesting to add federal clerkships to this. In any event, even with adding the two items I note above, the numbers here are remarkably low -- that is, there is a very low chance of a six figure job coming out of law school (except if you're coming out of the top 20 schools or so -- but even then it is far from guaranteed).